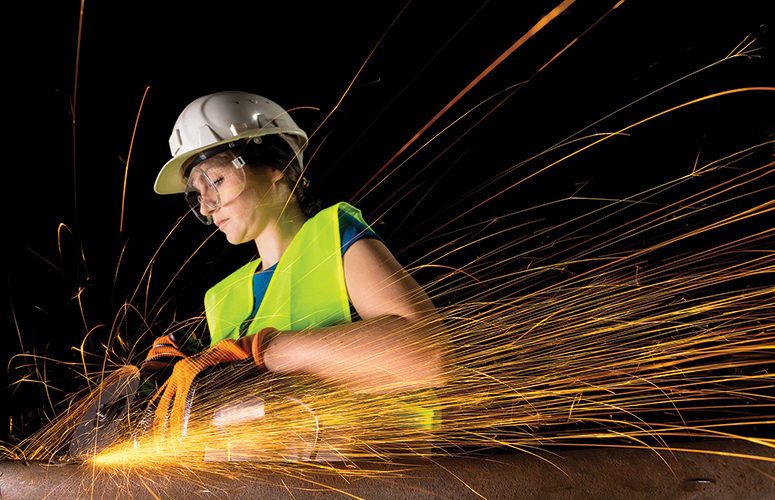 Soaring costs for higher education and difficult economic times have made careers in the construction trades a desirable alternative for many people. Trade officials, along with contractors and developers, have welcomed this next generation of skilled laborers – including women and minorities – to a workforce that increasingly matches New Jersey’s population in its diversity.

“It is a union founded at the turn of the last century by immigrants,” he points out. “In addition to English, its membership communications were also offered in German and Italian.  Some 117 years later, and those same communications are now translated into Spanish, Portuguese, Polish, and Russian.  More than 50% of our apprenticeship class is made up of people of color, and we have actively recruited women, one of the most underrepresented groups, into the trade.”

LIUNA does a lot of work building programs that create good-paying career opportunities where they are needed most, in places that are largely represented by people of color.  In Jersey City, Newark, Camden and Paterson, special apprentice classes have been created for local residents. They gain entry into the union, receive free training needed to work in construction, and then work on projects where they live.

In Newark, where the lead water crisis has caused so much concern, Laborers Local 472 worked with Mayor Ras J. Baraka’s office to recruit and train local residents, all unemployed or underemployed women and minorities, who are now working to replace the water mains and service lines that are harming their community.

Laborers Local 55 in Newark serves the residential construction sector as well as performing home energy performance work to improve energy efficiency.  Working with the Newark Housing Authority, it has assembled a program that actually takes housing authority residents and trains them to perform apartment turnover and renovation work for the authority itself.

That creates a cycle of self-sufficiency where men and women work their way into independence while the housing authority self-performs work at a cost lower than it would otherwise pay to contract out the work.  In one case, LIUNA and the Housing Authority helped turn around the lives of people who were homeless and living in a shelter. They now have a home and earn more than $20 an hour performing renovation work.

Recognizing the challenges of recruiting and retaining women into the building trades, LIUNA Local 3 collaborated with the Elizabeth Development Corporation to bring almost 20 women, all residents of Union and Essex counties, into the Laborers Union.  They are all now working in the field, taking classes, and on their way to a successful career as construction craft laborers.

“These special programs don’t work without the assistance of public officials who connect the dots between economic development and construction in their own community, job creation, and the role unions can play to train and support residents with no cost to the local governments,” Lewandowski notes.

IBEW Local 102 President Bernie Corrigan believes the world is evolving and industry in general needs to grow with it. “Everyone is important, and each individual is part of the equation,” Corrigan states. “We shouldn’t limit the conversation or questions to a specific industry or a specific group of people. If we actively listen to each other and build common ground, we can take strides toward an environment where diversity becomes the new norm.”

Outreach is an everyday mission at Local 102, Corrigan continues.

“We work with high schools, Youth Transition to Work (YTTW), and NJ Helmets to Hardhats, to name a few. We provide tours of our facility on a regular basis and participate in various career programs with Construction Industry Career Day (CICD) being one of the largest,” he adds. “We now utilize a diverse group of apprentices and recent graduates to help market our apprenticeship program at these venues. Prior to this, we had utilized primarily instructors and staff. We feel this new approach cultivates a feeling of being approachable when young students see individuals that project a comfort zone and who will answer their questions from recent and personal experiences.”

Henry Lora joined Local 102 in 2006, and now proudly serves as the first Dominican on the union’s Executive Board. He encourages other people from his Paterson community, including friends and family, to follow in his footsteps. “I was determined to reach my goals; to help my family and community. Our union’s leadership and open-mindedness has helped make that possible,” Lora says. “I feel involved, on track and in position to not only achieve my goals, but to bring more people up around me.”

LIUNA created recruitment posters targeting women and distributed them at the New Jersey Education Association Convention and to guidance offices at schools throughout the state.

Yet, LIUNA’s Lewandowski knows that just recruiting women into the union is not enough. There are unique issues – issues of equity and safety and health – that must be addressed.  It is not just a union issue, he points out, but an industry issue. Both labor and management must take time to understand and eliminate the barriers stopping more women from choosing a career in construction.

“It includes everything from having the proper personal protective equipment (PPE), since most gloves, goggles, fall protection harnesses, respirators and the like were built with men in mind and are ill-fitting for many women,” Lewandowski highlights. “Have you addressed the issue, and do you provide the proper safety equipment?  Are the toilet facilities adequate?  Have you thought about reproductive hazards in the workplace? A lot of construction work means working around chemicals and other hazardous substances.

“You have to address the increased risk for women of reproductive age. Obviously, sexual harassment and creating a healthy and safe workplace culture is paramount. Recruiting women into the trades is only a fraction of what needs to be done to make things work.  It is all about paying attention to the details,” he says. One source of success has been the establishment of affinity groups within LIUNA, including the Women in Construction Committee, the LIUNA Women’s Caucus, African American Caucus and Latino Caucus. The groups are run by, and for, the people they represent. They also help create a culture of support and a mechanism to discuss and address issues that are unique to a subset of the membership.

“Once you have a diverse membership, it is easier to keep a diverse membership,” Lewandowski concludes. “Word of mouth goes a long way, and when people see leaders and members who look like them, including business managers, union officers, directors, shop stewards, instructors and directors, it sends a message of authenticity.”