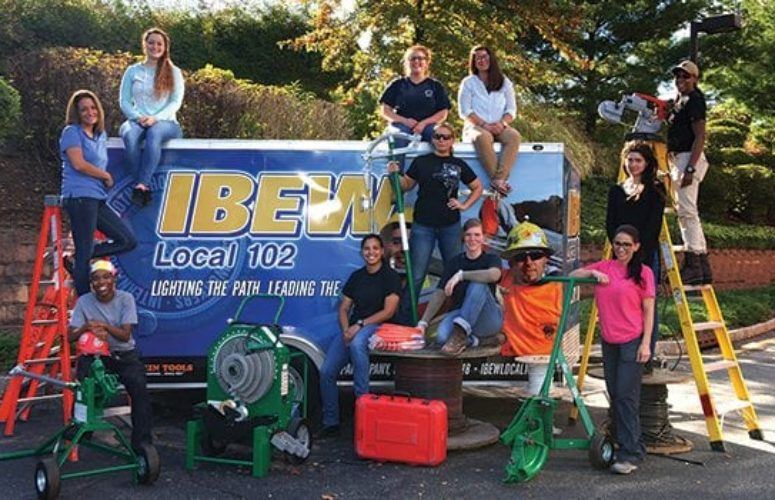 A group of female IBEW Local 102 apprentices. Courtney Tartamella (sitting on top of the trailer to the right), a 3rd Year Apprentice with IBEW Local 102, says she hopes to take her career as an electrician “as far as possible and eventually run jobs of my own one day.”

More women are entering construction trades for the same benefits and opportunities that once attracted men only.

With the recession behind us and a stream of money flowing from loans and state aid – including $400 million from the Transportation Trust Fund (TTF) – demand for jobs in New Jersey’s construction industry is building, along with an influx of women seeking to fill them. The traditionally male-driven world of electricians, heavy equipment operators, carpenters, pipefitters and steelworkers, for example, attract women for the same reasons they’ve drawn men for many decades: an enduring career with good wages, healthcare, a pension, free education, and the ability to support themselves and their families with pride and dignity.

IBEW Local 102 of Parsippany saw a significant uptick in female applicants to its most recent apprentice program and accepted nine females, nearly one quarter of the approximately 40 spots available each year.

“This increase is due – in part – to our marketing, such as a video shared online and with local school districts that highlights the females in our group, and to the support these workers provide other females considering electrical as a career,” Bernard Corrigan, president of IBEW Local 102, states. He adds that as more high school guidance counselors and parents understand the benefits of a trade – and move their focus from four-year college options to a career in construction – more positive perceptions will begin to evolve.

“We currently have our largest contingent of females in our five-year apprentice program: 19 out of 279 registered apprentices,” Corrigan reports. “While this number may seem low on face value, it is well above the national average for women in the trades and is a definitive movement in the right direction.”

The Work Speaks for Itself

Courtney Tartamella, a third-year apprentice with IBEW Local 102, tells New Jersey Business that she hopes to take her career as an electrician “as far as possible and eventually run jobs of my own one day.”

She notes her union’s great medical benefit package, retirement plan, vacation fund and other benefits. She says the current increase in female applicants across the trades is due to those benefits as well as “society finally realizing that women are perfectly capable of performing the same job tasks as men. When challenged in this regard, I ask for a fair chance and to let my work speak for itself,” says Tartamella, whose mother also belonged to IBEW Local 102.

Tartamella’s co-worker, Kelly Alsobrooks, is also a third-year apprentice. She describes her position as “a rare opportunity offering continued education, great benefits and a competitive pay rate that continues to attract more women. For example, I’m now working on a project with four other females: A carpenter, laborer and two other IBEW members,” she says.

Union construction addresses two major social and economic issues: Pay equity and discrimination. While nationally a woman may be earning, on average, 80 percent of a male doing the same job, union pay and benefits are negotiated collectively and are the same for everyone. The contract, not gender, defines the wage.

“Old unionism was all about winning at the bargaining table, but new unionism is about helping contractors win work so that labor and management both win in the long run,” Rob Lewandowski, communications director for the Laborers’ International Union of North America (LIUNA), declares. “This requires a balance between worker advocacy and employee-employer collaboration in which both take precedence.”

LIUNA’s apprenticeship program has almost triple the number of the female construction craft laborers compared to the national average, “but we think there’s still room to grow our membership of women laborers,” Lewandowski reveals. “To do so, we must eliminate any barriers that keep women from joining, staying with and succeeding in a union. Here at LIUNA, women laborers run entire field work crews and serve as department heads and managers. Women seeing women in leadership is extremely motivating.”

Outreach and recruitment is ongoing at LIUNA. The union works with social service and government agencies, and regularly visits high schools and vocational schools to reveal the great opportunities offered, especially for women today. “Speaking to students is important, but we also put a great deal of emphasis on educating teachers and guidance counselors about the advantages of a building trade. They often have outdated notions of what the construction industry is like. While we’re happy to enlighten one student, when we reach one guidance counselor, we connect with hundreds of students each year.”

The Associated Construction Contractors of New Jersey (ACCNJ) of Edison, the state’s only organization representing all commercial and public construction contractors, promotes the quality, integrity, skill and responsibility of its members by encouraging the highest safety and business standards for the industry.

Jill Schiff, executive director of operations for ACCNJ, says her organization offers myriad programs, support and opportunities, stressing that “women who enter a union apprenticeship program in New Jersey are paid the same wages and benefits as men. Afterwards, as journeyworkers and managers, they earn good livings in the state’s private industry sector, along with excellent healthcare and retirement benefits. We see very little turnover in management employees, because the work environment and benefits are superb.”

Among the state’s other construction trade unions and organizations, the Carpenters Contractors Trust, also of Edison, is a labor-management cooperative that markets the talent, productivity, assets and expertise of its union carpenters and contractors to the construction community and public throughout the northeastern US.

The expansive CCT network includes Edison’s Carpenters Local 254 – a massive New Jersey trade union with nearly 4,000 members in the construction and wood products industries. One of those members is Roxie Sindel, an apprentice with Local 254 who, after graduating high school, sought a job that paid well and offered security, without incurring college debt.

“Entering the carpenter trade was the best route for me. I started at the same wage earned by many college graduates and received a raise after just one year,” Sindel claims. “I have healthcare, am vested in a pension and am learning a skill I can take anywhere a good carpenter is needed.”

Sindel says acceptance of women in the trades is increasing, evidenced by the positive change in attitude demonstrated when women arrive on a job site.

“As our male counterparts see us handle the work well, they become much more accepting. For example, I was teamed with an older, very experienced journeyman who doubted my capabilities. At the end of the day he said, ‘I didn’t think you could handle it, but I was wrong: You did a good job and changed my mind about women carpenters.’”

When judged by the finished work, there really is no difference between male and female trade workers, Sindel adds, “and, increasingly, women in our union are convincing other carpenters of this fact. Now it’s time for contractors and builders to recognize that we’re just as good as the men.”

As more women understand that they can earn a good income – full benefits and a pension while learning a trade skill – more women will join the construction industry and wonder why they didn’t do it sooner.