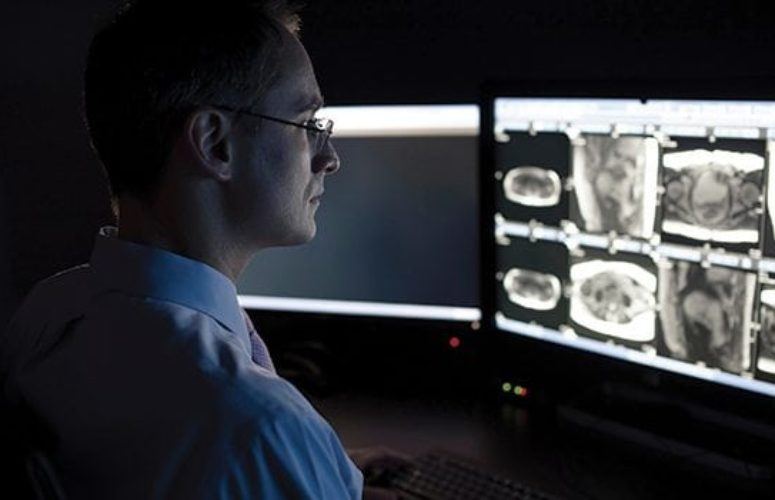 Diagnosing cancer at Memorial Sloan Kettering (MSK): Among its many diagnostic tools, the institution uses a system with more than 140 separate cameras to create a whole-body avatar of the patient, says Richard Barakat, director of MSK’s regional care network.

Imaging and Immunotherapy Lead the Future of Cancer Care

Innovations in diagnosis and treatment make it increasingly possible to focus attention on specific types of cancer and spare the patient from more invasive surgeries and therapies.

In the ongoing fight to eradicate cancer, medical practitioners across the state are tapping into newer approaches to care that let them target the disease at its root. Treatments and detection continue to advance, improving potential outcomes and quality of life for patients, but heavy lifting remains before cancer can be wiped out.

CentraState Healthcare System, which sees about 1,000 cancer patients annually, puts a variety of technology to work to detect cancers as early as possible. “We have 3D mammography, which is more sensitive and specific at picking out breast cancer,” says Bhavesh Balar, medical oncologist with CentraState. This digital technology quickly takes multiple x-ray images from different angles, allowing for more thorough screenings compared with two-dimensional x-rays. That is just one example of the equipment and techniques being applied at New Jersey hospitals to combat cancer.

There is an ongoing need for newer, more sophisticated forms of detection and treatment given the variety and persistence of the disease. Balar says lung cancer remains the most commonly seen at the hospital. Breast cancer, prostate cancer, colon cancer, pancreatic cancer, bladder cancer, lymphoma and leukemia are treated there as well. “We also have a fair number of melanomas – the aggressive skin cancers,” he says.

Some of the more recent developments in diagnostics have evolved from techniques and equipment that have already been in service. Positron emission tomography (PET), for instance, is being combined with other technologies, such as magnetic resonance imaging (MRI) and computed tomography (CT), offering practitioners deeper levels of screening and detection. Such high-resolution imaging can better identify smaller tumors, Balar says.

Many hospitals in the area that specialize in cancer treatment have been adopting advanced imaging for diagnoses. Endoscopic ultrasound probes are used to biopsy masses in the pancreas, which may reduce the need for operations for many patients, says Ephraim Casper, chief medical officer with Valley-Mount Sinai Comprehensive Cancer Care. One of the newer forms of diagnostics is MRI-ultrasound fusion, which is used particularly for prostate cancer detection. Valley-Mount Sinai sees between 2,200 and 2,500 cancer cases per year, he says.

“Ultrasound is used to identify masses, which suffices, but is not as precise as needle biopsy,” Casper says. “MRI is good at looking at the prostrate and surrounding lymph nodes. We’re able to combine the images to get a merged picture, and then a biopsy can be done by a urologist under ultrasound as an outpatient procedure.”

Memorial Sloan Kettering (MSK) uses a system with more than 140 separate cameras to create a whole-body avatar of the patient, says Richard Barakat, director of MSK’s regional care network. Some of the novel technology in the works includes the use of radioactive glucose as a marker for cancer because tumors take up glucose more avidly than normal tissue, he says.

Increasing access to some of the latest efforts in treatment is also on the agenda for MSK. “It used to be that you had to come into Manhattan to get access to therapeutic clinical trials, which is what drives the field forward,” Barakat says. The cutting-edge innovations are made in such trials, he says, where novel agents first get tested. More than 800 clinical trials are run annually at MSK, with more trials opening up across its network. “Memorial puts about 5,000 patients in therapeutic trials a year,” he says. Some of the latest trials are on precision medicine.

Tracking DNA associated with cancer is a recurring theme in some of the latest forms of screening. For instance, there are colon cancer screening tools that look for cancer DNA in patients’ stools. Looking at the DNA of cancer cells, Balar says, can identify what mutations are present – information that can be used to create drugs that target that mutation.

As more drugs become available for specific molecular mutations, even cancers of different origins that share that mutation may respond well to those drugs, says Barry Levinson, MD, medical director of the Trinitas Comprehensive Cancer Center, which sees more than 600 new cancer diagnoses per year.

Barakat says future testing could include liquid tumor biopsies, where blood is tested for cancer DNA. “If it is known that a tumor secretes DNA into the bloodstream, you could test for that,” he says.

Figuring out how cancer develops might give the healthcare industry more ways to home in on and potentially reverse the cancer, Balar says. Immunotherapy drugs, for example, are designed to make patients’ immune systems fight cancer cells, which can decrease the need for radiation-based treatment. “People are living longer with much better quality of life without the side effects of chemotherapy,” he says.

These newer treatments can be specific in turning on the patient’s immune system, says Levinson. “A lot of what we talk about now are immunotherapies, which harness the power of the body’s own immune system to fight cancer,” he says.

Some drugs used 20 years ago to stimulate the immune systems might have been very effective, but were also highly toxic, Levinson says. “Now, we have therapies that are more specific, less toxic, and more tolerable.” Despite those advances, he says, chemotherapy continues to have a role because it is very effective for treating certain types of cancers such as testicular cancer and lymphoma.

Taking a biological approach to addressing cancer is opening up other new forms of treatment, says William DeRosa, chief of oncology at Summit Medical Group MD Anderson Cancer Center. Though it was presumed that there was something different and distinctive about the biology of cancer, the healthcare industry is still in the early stages of the molecular era of medicine, he says. “We’re now finally starting to understand exactly what’s wrong with the circuitry of that cell.”

Summit Medical Group (SMG) treats some 2,500 cancer patients annually, and that number is expected to grow, DeRosa says. Physicians from SMG are on staff at hospitals, including St. Barnabas, Morristown, Overlook Hospital, and Valley Hospital. A freestanding 130,000-square-foot cancer care center is under construction in Florham Park, which DeRosa says will offer sophisticated care to patients in a fiscally responsible way.

Not all cancers behave identically, and even in individual patients not all the cells are identical, he says. The understanding of the nature of cancer has evolved from the days when lung cancer was classified in just two categories; as either small cell or non-small cell. Now, lung cancers can be further identified by separate mutations. This has led to the development of targeted therapies tailored to the gene responsible for the driver mutation. “That has been a huge leap ahead over the last 10 years,” DeRosa says.

The pace of discovery in cancer care is accelerating the ability to design therapies, as seen with advances in immuno-oncology, where the individuals’ immune system is modified to fight the cancer. Bone marrow transplants, for instance, take the donor’s immune system and puts it into the recipient. Getting the body’s immune system to respond as desired, however, is still a challenge. Such transplants may be rejected by the recipient’s body. However, DeRosa says, if there was a way to signal a patient’s immune system to attack cancer cells, it would mitigate the need for marrow donors.

“Targeted therapies are where the advances in the future are going to come from, understanding and targeting mutations,” Barakat says. “The biggest stride we’re seeing is immunotherapy and engineered T-cells.” Such drugs harvest patients’ natural T-cells, and re-infuse them into patients. It is a complicated process, but shows promise, he says, especially for reducing the morbidity of open surgery techniques. Lymph node dissection, for example, has been a hallmark of cancer surgery. However, removing too many lymph nodes can have permanent debilitating side-effects, called lymphedema, which causes swelling of body tissue, especially in the limbs, Barakat says.

In addition to targeted drugs, precision surgery is also being used to treat cancer and minimize the impact on patients. Casper, of Valley-Mt Sinai, says Gamma Knife Icon technology can be used to address brain tumors while avoiding exposing the entire brain to radiation and surgery. He also says intraoperative radiation therapy for breast cancer is on the brink of being used at his hospital. In some cases, women being treated for breast cancer might have to come in for daily radiation for five weeks. With the intraoperative therapy, they would get an implant with radiation at the time of the operation and be done.

“The aim is to do as little harm as possible to the patient in treatment,” he says.

Another way radiation therapy for breast and lung cancer is focused on tumor locations is through the use of deep inspiration breath-hold, Casper says. Patients take a deep breath and hold it, so that structures that normally move when they are breathing are kept in one position. That allows the same location to be treated with radiation repeatedly.

As advanced as treatments are becoming, halting cancer before it can start is a priority. HPV vaccinations, DeRosa says, have the potential to eradicate cervical cancers that result from papillomavirus infections. “Ultimately, we would rather do prevention and not have people develop any cancers,” he says.

Levinson concurs that proactive steps to prevent or catch cancer at the early stage naturally makes treatment easer. “Early screenings are important. Most cervical cancer seems to be related to HPV,” he says. “If you can vaccinate young people before they become sexually active, you can prevent a large percentage of cervical cancer cases.” Meanwhile, lung cancer remains a leading type of cancer that is related to, but not exclusive to, smoking. “Quitting smoking will remarkably reduce the death rate for lung cancer,” he says.

Barakat says genetic counseling, which aims to address inherited mutations associated with higher risks of cancer, lets patients consider options such as risk-reducing surgery. “One of the biggest challenges we still face is early detection,” he says. “We discover many diseases at early stages, but often by the time the disease is diagnosed, it makes it difficult to cure them.” Cancers can mutate and become drug resistant, further compounding treatment challenges. “This is why a mutational profile allows for targeted treatment with a higher likelihood of a better outcome,” Barakat says.

It is not always possible to eliminate cancer, but practitioners continue to look for ways to treat it, through medication and management, as a long-term chronic illness like diabetes, Balar says. “If you cannot cure it, you can treat it,” he says. “Then a person lives a normal life.” Improvements to radiation techniques that offer much higher precision targeting, better supportive care, and pain management to deal with side effects such as nausea, vomiting and dehydration can all help make the disease more tolerable.

Casper says another significant challenge in dealing with cancer treatment is the cost of the treatment. “It can be overwhelming for some patients and it’s the cost of cancer survivorship,” he says. “Some people can’t afford the drugs they need or the follow-up visits.” A form of treatment called CAR (chimeric antigen receptors) – T cell therapy can cost $400,000 per treatment, he says, and that is after the cost already came down. “Society, I don’t think, can sustain that,” Casper says, “yet we don’t want to hold it back from anyone. We need to figure out how to overcome the cost.”

Dealing with the cost of cancer as expensive immunotherapies see more use seems to be a mounting issue that weighs heavily on the entire healthcare system, Levinson says. “There will be a tsunami of cost at some point in time.”