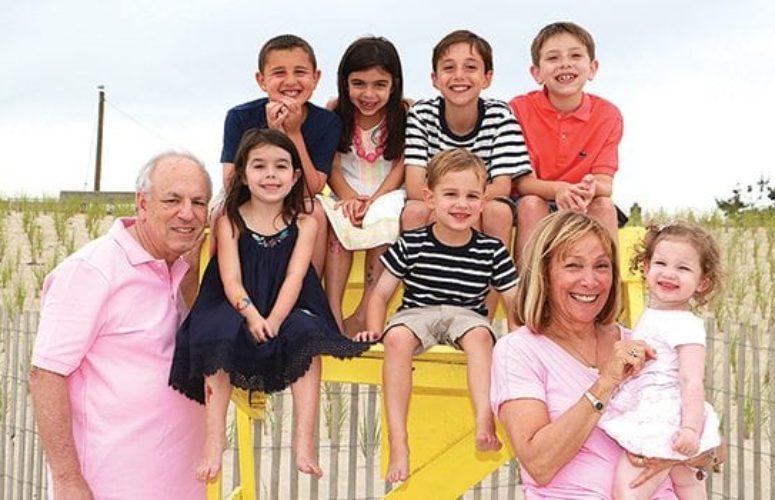 Dr. Arnold Baskies and his wife Susan with their grandchildren.

Earlier this year, Dr. Arnold Baskies, a Cherry Hill resident and medical director at Virtua Health Systems, was elected chairman of the board for the American Cancer Society, Inc. A Cancer Society volunteer since 1979, Baskies has invested a lifetime in increasing cancer screening rates, improving access to care, and advocating for increased research funding. He is the first New Jersey resident to serve in this role.

“The American Cancer Society is a shining example of what people of different beliefs and backgrounds can achieve when they unite around a common, healing cause, and it is an honor and incredibly humbling to be named chairman,” Baskies says.

Baskies is motivated not by titles, but by the firm belief that his seven grandchildren will know a world without cancer.

“We’ve made tremendous progress and we are attacking cancer from every angle. Cancer deaths have declined 25 percent in the last few decades, thanks in large part to the American Cancer Society’s programs of research, education, screening and support,” Baskies says.

That’s more than 1.7 million cancer deaths avoided. More people are surviving cancer than ever before. Today, there are about 14.5 million cancer survivors in the US, a number that is expected to grow to almost 19 million by the year 2024, due to population growth and advances in early detection and treatment.

“It is a source of pride to have been a part of that progress. But it is also sobering that there are still many cancers for which we still do not have answers, many families for whom we do not have hope, and many communities that have not experienced progress because of lack of access,” Baskies says.

As more people survive and thrive after a cancer diagnosis, addressing the unique needs of cancer survivors becomes more important than ever.

The American Cancer Society has played a role in most of the major cancer research breakthroughs in recent history. There are currently more than $405 million in research grants at work, and that work spans numerous areas, including what causes cancer, how best to prevent, detect, and treat the disease, and how to improve quality of life for people living with cancer.

In New Jersey, the American Cancer Society estimates that 51,410 New Jerseyans will receive a cancer diagnosis this year. And 16,250 people will die from the disease.

“Most of us have had an immediate family member or friend with cancer. While we’ve made great progress, there is still so much we can do. I want more for this next generation. And I believe they won’t experience cancer the way that we do,” Baskies says.