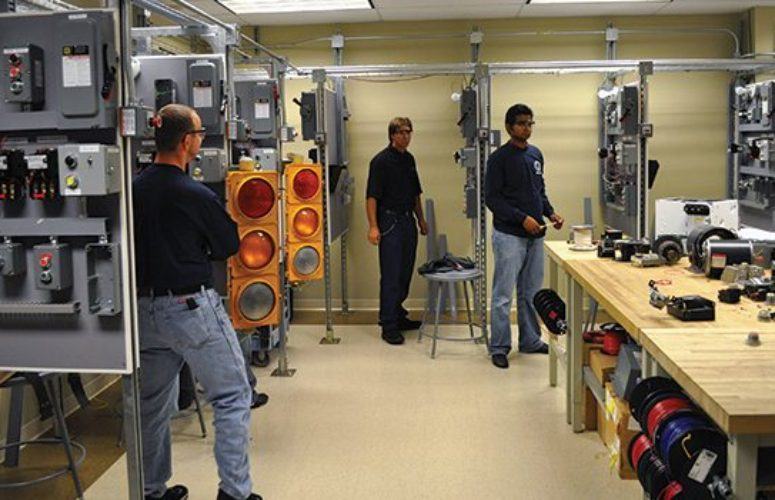 English philosopher and statesmen Sir Francis Bacon is credited with the phrase, “Knowledge is power.” When it comes to collaborative efforts between the state’s labor unions and the business, investment, academic and regulatory communities, knowledge is the catalyst for building a better New Jersey.

From apprenticeship and continuing education programs for union workers that help get projects built efficiently, effectively and safely, to communications programs to support issues impacting employment opportunities and business expansion, organized labor has been a driving force behind efforts to promote collaboration and partnerships to spur economic development statewide.

“Union apprenticeship programs create opportunities for thousands of New Jersey residents to get a free education, training and continuing education opportunities that benefit not only organized labor, but also builders, investors and the state’s economy – that’s a win-win for New Jersey,” notes Raymond M. Pocino, vice president and Eastern Regional manager for the Laborers’ International Union of North America (LiUNA). “We are incentivized to foster market-driven skills in productivity and safety, and to find areas of common interest and be on the same side of the table as New Jersey’s employers, project owners and contractors.”

“It might surprise some business people, but the word ‘partner’ entered our lexicon when dealing with developers and contractors,” says Kevin McCabe, president of the Carpenter Contractor Trust (CCT). “This approach was not just a change in vocabulary; it is part of our new, 21st-century carpenter culture. However, it’s a matter of convincing the status quo, especially the non-union worker, that the collective strength of unions provides for a broader middle class that helps contribute to a more vibrant economy. It’s our job to demonstrate that our relevance as a union not only promotes a more prosperous middle class, but also a sounder economy for the entire country.”

When it comes to workforce development and training, McCabe says his organization has taken a broad and eclectic approach. “It’s critically important to understand that a shortage of skilled workers is rampant among all the trades, almost without exception,” he adds.

A pre-apprenticeship program allows potential candidates to “sample” the life of a carpenter. When they graduate, they enter the full apprenticeship program. This prevents disappointment from candidates who are uncommitted and precludes the union from investing in students who have not committed to becoming carpenters. The CCT promotes the programs to veterans, who are often ideal candidates for the carpentry trade. The Trust is also engaged in attracting women and minorities to the industry, two groups that have historically been nonparticipants in the construction business. The goal is to build long-term relationships to identify potential skills and future talent.

Anyone who enters and completes the union apprenticeship program in New Jersey gains significant college credit. After completing the carpenters’ program, they are eligible to receive upwards of 24 hours toward an Associate in Applied Science (A.A.S.) degree in technical studies at any community college in New Jersey. If they enroll at Thomas Edison State University (TESU), they are eligible for 34 credits toward the A.A.S. in any of the construction-related disciplines that TESU offers.

The CCT is a labor-management trust established in 2001 by union carpenters and contractors. This partnership combines the vast resources of the Northeast Regional Council of Carpenters, which is currently in the process of relocating its training facility from its existing 68,000-square-foot location in Kenilworth, to a 180,500-square-foot facility next to NRCC and CCT headquarters in Edison.

The International Brotherhood of Electrical Workers (IBEW) Local 456 works closely with the Northern New Jersey chapter of the National Electrical Contractors Association (NECA) and the Northeast Line Contractors to provide the highest trained and most competent workforce available.

Through the local’s Joint Apprenticeship and Training department, its members are prepared to meet changing customer demands. Journeymen and journeywomen receive the support they need to stay ahead of demands on electrical construction trades. A five-year apprenticeship program provides leading-edge training for electricians, communication workers and linemen.

Pat Delle Cava, business manager of IBEW Local 102, says that serving an apprenticeship with Local 102 is an investment in the future. Local 102 members can participate in a five-year program that includes a minimum of 900 hours of classroom instruction, and a minimum of 8,000 hours of on-the-job training, a combination that is contributing to a successful future for individuals interested in pursuing a career in the electrical trades.

“We provide the foundation for not just a job – an apprenticeship at Local 102 is the road to a career,” Delle Cava adds. Once its members have completed their programs, including opportunities at the local’s training center and through its partnerships with the New Jersey Institute of Technology (NJIT) and Union County College, they are on the road to competitive wages, continuing education that lets individuals earn while they learn, plus healthcare and pension benefits.

“IBEW Local 102 and NJBIA share many of the same goals,” says NJBIA President & CEO Michele Siekerka. “We are working together to build a strong economy, rebuild our infrastructure and continue to develop an educated workforce. Local 102 is a great partner.”

Delle Cava says that Siekerka has been helpful in identifying obstacles to business progress, and supporting opportunities to foster communication and connectivity between all of the parties involved in building a better New Jersey, including organized labor and the business and investment communities.

“Our goal is to connect with people to help identify what problems are out there impacting end users, so we can contribute to solutions,” Delle Cava notes. “Businesses need to thrive in order for us to have opportunities to build. Because we have a good understanding of the working parts and interconnectivity with all parties involved, we can contribute to business partnerships, address legislation impacting our economic prosperity and growth and foster progress that benefits the state’s economy,” he concludes.

As a major employer in the state, PSE&G is proud to provide good-paying jobs for about 6,780 employees – about 5,000 of whom are represented by a labor union, notes Joe Forline, vice president–gas operations. “We enjoy a productive, respectful relationship with our unions, whose members enable us to do everything from read electric and gas meters, handle customer inquiries, and maintain the infrastructure our customers depend on. We also take pride in our ability to work closely with other unionized contractors to make critical upgrades to electric and gas systems.”

A study done by Rutgers University estimated that PSE&G’s transmission projects alone will create 6,000 direct and indirect sustained jobs for the next 10 years. Many of those jobs are in the construction trades, most of which are union-represented positions.

In May 2014, PSE&G received approval of its $1.22 billion Energy Strong program to protect and strengthen the utility’s electric and gas systems against severe weather events, like Hurricane Irene and Superstorm Sandy.

During the past two years, PSE&G has been replacing vulnerable gas pipes, upgrading substations and adding intelligence to its system to speed restoration when there are outages. To perform this work, PSE&G has hired more than 300 full-time employees and put thousands of skilled contractors and laborers to work installing new gas mains, raising or relocating substation equipment and erecting water barriers.

PSE&G is also spending $905 million to speed up the pace of gas main replacements – going from an average of 54 miles per year, to 170 miles per year. The work is taking place in about 50 towns across the company’s service area this year, with nearly 150 permanent, full-time, union jobs with benefits added to support the gas upgrades.

“Through outreach initiatives and programs, we nurture a talent pool of diverse candidates who have an interest and understanding of the energy industry and the career opportunities available at PSE&G,” Forline concludes.

LiUNA’s Pocino notes cooperative and collaborative efforts between the state’s labor organizations and developers on other high-profile projects statewide, including the Holtec International development in Camden. “Complex projects require site specific safety and health plans that contribute to better productivity that benefits everyone involved,” Pocino says.

Lieutenant Governor Kim Guadagno participated in a beam-topping ceremony at the Holtec site in September. A leading player in the nuclear industry, Holtec is creating a campus on the banks of the Delaware River for its world headquarters and manufacturing facilities. The project, which garnered bipartisan support from the state’s political leaders as well as significant incentives from New Jersey’s Economic Development Authority (EDA), has already created hundreds of local jobs, many requiring skilled laborers.

In addition to supporting local workforce development and apprenticeship programs, including a recently announced Welder’s Training Program at Camden County College, the state’s labor community has contributed the skills of industrial hygienists, working with contractors and developers to ensure that safety standards on the site are met and exceeded.

Providing training and apprenticeship programs for its members is just one example of knowledge power. New Jersey’s labor community has also invested significant time and energy to support public education and awareness of issues impacting not just union workers, but all of the state’s stakeholders.

Local 825 Operating Engineers has been at the forefront of the fight to fund the state’s Transportation Trust Fund (TTF) through an aggressive advertising campaign. The multi-media effort, including newspaper, television, radio, online and social media ads, had pushed for a resolution to the political standoff that had halted construction projects statewide. The local’s leadership has emphasized the importance of the TTF’s sustainable replenishment not just in terms of jobs for union workers, but also for its impact on the state’s transportation infrastructure, citing safety concerns for people traveling New Jersey’s roads and rails and New Jersey’s key role in the regional economy as a transportation corridor for goods and services.

LiUNA has also been vocal in the fight to fund the TTF as well as its support for a “yes” vote on the November 8 ballot by New Jersey voters to approve expanding gambling outside of Atlantic City and allow the construction of two new casinos to be built in northern New Jersey.