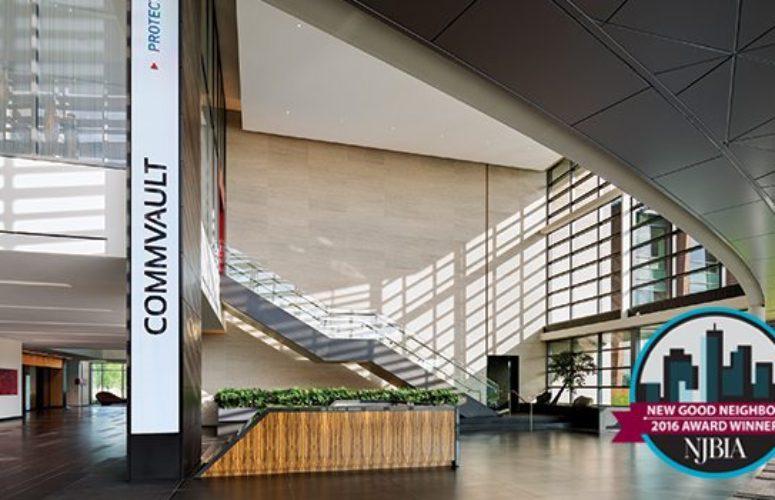 The Fort Monmouth Economic Revitalization Authority’s (FMERA) goal of developing the historic site and creating jobs received a big boost when technology giant Commvault decided to locate its world class headquarters there. Phase 1 of its $134-million, three-phase construction project was completed in 2014.

The building’s striking exterior of cutting-edge rain screen systems combines lightweight limestone panels with aluminum and engineered wood. Canted three-story piers capped with an aluminum sunshade cast shadows along the curtainwall façade throughout the day and help to mitigate solar gain during the peak cooling season. The overall composition presents a warm yet ultra-contemporary image consistent with both the interior and Commvault’s culture.

The first phase, completed in just two years, houses approximately 800 employees. Once all three phases are completed, Commvault can create up to 2,000 new jobs for the state.

Commvault was formed in 1988 as a development group within Bell Labs and later was designated a strategic business unit of AT&T Network Systems. It was incorporated in 1996 as an independent company. In the 20 years since, Commvault has experienced tremendous growth, pioneered numerous industry-shaping innovations, and established itself as a respected data and information management leader. It also is recognized as having been the catalyst company in kicking off the rejuvenation of the former Fort Monmouth property as a source of new jobs – including some 600 during construction, investment and community pride for the residents of Tinton Falls.