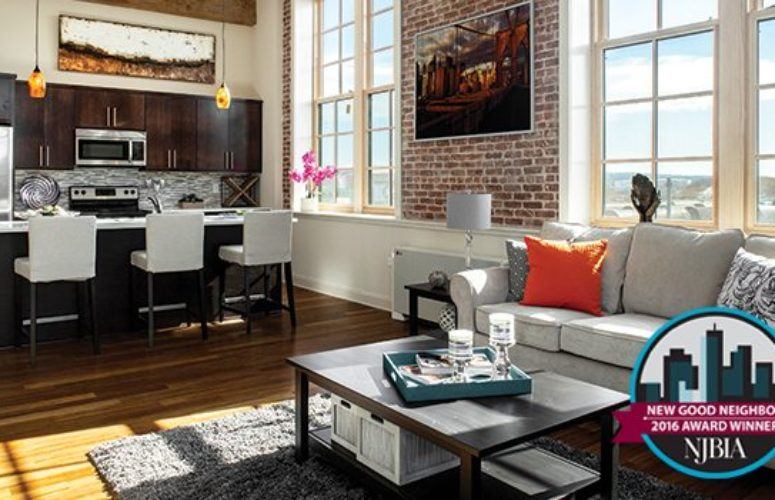 Though 154 Avenue E started as a silk factory in 1886, it became famous in 1929 as the legendary Maidenform complex where the headquarters of the iconic undergarment company was located for about 76 years.

In 2010, the building was purchased and the journey began for its $18-million adaptive re-use, restoration and conversion. Today, it is home to 85 residential loft-type apartments that, while modern, maintain the feel and character of the 100-year-old structure. The conversion was such a success that the building received landmark approval for Historic Preservation by the National Park Service and became a catalyst for redevelopment in Bayonne’s Broadway corridor.

The apartment units feature exposed brick walls, exposed beams and columns, and 12- to 20-foot high ceilings. The exterior façade was restored and eliminated, and original windows were re-opened and replaced with new historically approved windows.

The original boiler room, one of the outbuildings in the courtyard, was converted to two apartment duplexes, exposing the original trusses on the second floor and incorporating solar tubes to bring natural light to the space. The terra cotta plastered ceilings in the carpenter’s space were restored with new plaster finishes to reflect the original vaulted structure. These spaces were converted to two-bedroom apartments.

Existing planking was saved and re-used as sub flooring wherever possible, as were the existing stairs. Elevators, required to meet ADA requirements, were installed in the original industrial elevator shafts.

The building’s interior courtyard includes a pizza oven, fire pit and outdoor grills for tenants’ use. Many of the communal tables and benches are built from the building’s re-used timbers.

Situated just two blocks from the Hudson-Bergen Light Rail’s 22nd Street Station, Silklofts is considered a linchpin for a new kind of urban living in Bayonne, a commuter-friendly city that is known for its strong sense of civic pride, low crime, quality schools and neighborly atmosphere.

USGA Engages On and Off the Golf Course