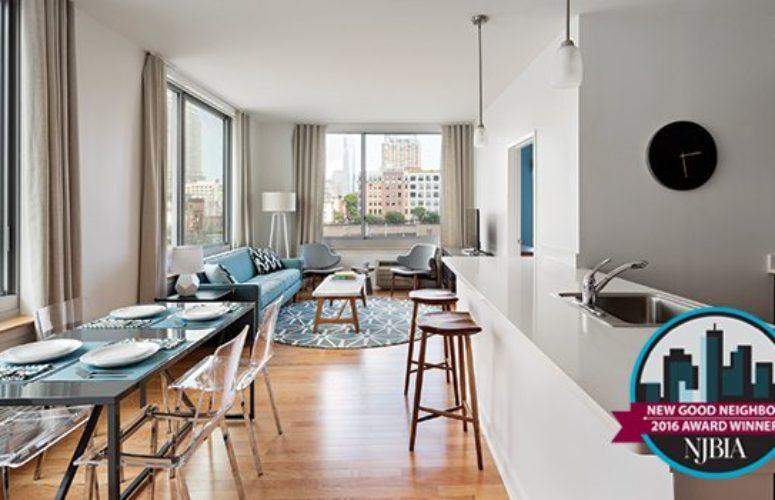 The $150-million 18 Park Avenue development is a mixed-use property built on an abandoned lot adjacent to the Liberty Harbor waterfront in Jersey City.

The development follows the principles of New Urbanism – a city-planning movement that seeks to lessen dependence on automobiles while encouraging a lifestyle where jobs, shops and housing are located near one another. 18 Park Avenue is a short walking distance from downtown Jersey City and blends 415 apartments and seven townhomes with retail and cafe spaces.

It is also the new site of the Boys and Girls Club of Jersey City, which doubles as a home for the Great Futures Charter High School for the Health Sciences. The Boys and Girls Club has been an integral member of the Jersey City community since 1893, but was operating out of an old coal bunker on Grand Street. Now, it is in a new state-of-the-art facility designed specifically for boys and girls, and the Grand Street site will be turned into a high-rise mixed-use building.

Upon its completion in 2014, the 11-story, LEED Certified building became one of the first completed within the greater Liberty Harbor North development. It creates a more compact and connected neighborhood by infilling the waterfront area and extends the community south of the Hudson-Bergen Light Rail line Marin Boulevard station, turning the station into a stop within a neighborhood, instead of a stop on the fringe of one.

The extensive use of glass along the retail and Boys and Girls Club spaces creates a welcoming environment that encourages activity at the street level on all sides of the block. The incorporation of large windows in the design also allows for abundant natural light.

18 Park Avenue is a prime example of a project that contributes to the improvement of its neighborhood. The increased activity created by the project runs from morning to night, creating a truly vibrant, integrated community.