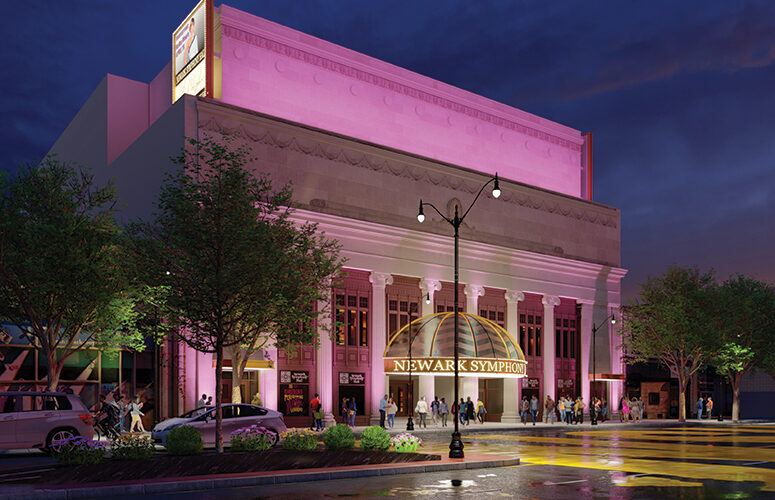 A rendering of Newark Symphony Hall, which is undergoing a $50 million renovation that will create hundreds of construction jobs and opportunities for dozens of small local contractors.
General Business

The Art of Building Newark’s Future

Destination marketing is essential for cities like Newark to attract major events to town. In 2008, the city established the Greater Newark Convention and Visitors Bureau (GNCVB) with that intent. The organization promotes Newark’s many festivals, events and venues. It also acts as a clearinghouse to respond to requests for proposals (RFPs) from organizations shopping for a city to host their large, multi-venue events and conventions.

“We work in collaboration with the local arts organizations, such as Newark Arts and the Mayor’s Office of Arts, Cultural Development and Tourism,” explains GNCVB CEO Ricardo Salazar. “Essentially, we are involved in any arts and cultural events in the city.”

There are literally dozens of organizations working tirelessly to support Newark’s arts scene, which is experiencing a renaissance in literally every ward. From new venues to new residential projects – and many unique retail and eating experiences – the synergy between development and creative expansion is obvious.

One of the city’s signature events is The Newark Arts Festival produced by the non-profit Newark Arts. Celebrating its 21th year, the five-day, multi-venue festival touches every ward. The centerpiece is the Newark Museum of Art, which hosts the opening night, with a special exhibition (that runs throughout October) featuring 50 artists, half of whom are local talents.

“The festival celebrates all the arts happening in Newark, including performances of dance, poetry, comedy, theatre and music, as well as significant art exhibits everywhere,” notes Felicia Swoope, executive director of Newark Arts.

Residential Housing and the Arts

The affirmation of faith in Newark’s future can be found in the numerous new high-profile building and renovation projects throughout the city.

One high-profile project is the proposed $125 million Lionsgate Studios-Newark. Located in the South Ward, the 12-acre redevelopment of the former Seth Boyden public housing complex will include a 300,000-square-foot, multi-building complex creating approximately 600 permanent jobs with priority given to Newark residents.

A major residential transformation is also in progress, drastically improving the walkability and viability of formerly run-down neighborhoods.

“The Mayor is laser-focused on ensuring that we have housing that is affordable, commercial spaces that are active as well as working to support small businesses, as they are the heartbeat of our communities,” notes Allison Ladd, deputy mayor and director of the Department of Economic and Housing Development for the city.

There are several residential projects that are bringing equity and inclusive development in line with the Mayor’s vision. “We want our residents to be able to afford to stay and live, work, and play in the city for years to come,” Ladd explains.

The Gant-Gilbert Arts Collective is a great example. Located at 505 Clinton in the South Ward, the former empty bank building is now 27 units of affordable housing and workspace for artists, as well as first-floor retail. The $10 million project was developed by Invest Newark.

Other projects include the Fairmount Commons project, underway in the West Ward on lots formerly owned by the New Jersey School Development Authority as well as city-owned sites. They are being developed into affordable and market-rate rental housing as well as space for childcare development services.

Then there is the $85 million Museum Parc, another significant mixed-use commercial/residential project being developed by the Newark Museum of Art with financial partner L+M Development Partners. Scheduled for completion in 2024, the project will add a 4,000-square-foot art and program gallery for the museum as well as 250 new residential units (including 50 affordable housing units) and street-level dining/retail to the downtown district.

Turning Newark into a 24/7 Entertainment and Arts Playground

Event nights at Prudential Center, NJPAC and local galleries and restaurants are creating new walkable experiences for residents and visitors alike to enjoy throughout the city.

The arts experience expands beyond downtown. For example, on Orange Street in the West Ward, the Akwaaba Gallery has quickly become a catalyst for positive change. Owners (and Newark residents) Laura Bonas Palmer and her husband Ray bought the 7,000-square-foot building in 2016, restoring the circa 1800s structure into a 1,400-square-foot gallery space on the first floor, plus four loft apartments upstairs. Opening in 2019, Akwaaba features an eclectic assembly of contemporary works of art.

Announced in May, the Newark Artist Collaboration (NAC) unveiled a series of installations and public artworks expressly intended to celebrate and amplify the work of Newark-based artists. Audible’s Founder and Executive Chairman Don Katz created the effort to encourage local investment in Newark’s creative community.

Recognizing the critical role local artists and art organizations play in enhancing the vibrancy and cultural capital of the city, the inaugural phase of the program features an array of completed and in-progress site-specific and original interdisciplinary artwork from 20 local artists and artist collectives.

Newark’s vibrant collective of museums, nonprofits and tourism organizations are working in tandem to create what NDD’s McMillan refers to as “a definite vibe.” Throughout the city, business improvement districts (BIDs) such as NDD are showcasing the unique vibrancy and culture of the many neighborhoods of Newark.

Established in 1925, Newark Symphony Hall has hosted orchestral legends the likes of Leonard Bernstein, as well as pop icons such as the Beatles and Aretha Franklin. After decades of being a somewhat forgotten gem in the city, a renovation project is transforming the hall.

According to Taneshia Nash Laird, president and CEO, “We have established an effort called Symphony Works, which is our approach for economic development anchored by Symphony Hall’s revitalization.”

The $50 million renovation of the hall will create hundreds of construction jobs and opportunities for dozens of small local contractors to impact the local economy. “We are also training people for stagecraft jobs,” Nash Laird notes.

Launched in 2018, the redevelopment project includes updates to the hall, as well as renovation and reactivation of the facility’s upper floors. In addition, the hall’s legendary 1,200-seat ballroom’s commercial kitchen, unusable for years, will be completely renovated, providing in-house catering for future events. Renovations will also freshen up the smaller Black Box Theatre, as well as office spaces in the building and at current offices on 1030 Broad Street.

“Our programming is about supporting the culture reflected in the community of Newark,” Nash Laird concludes.