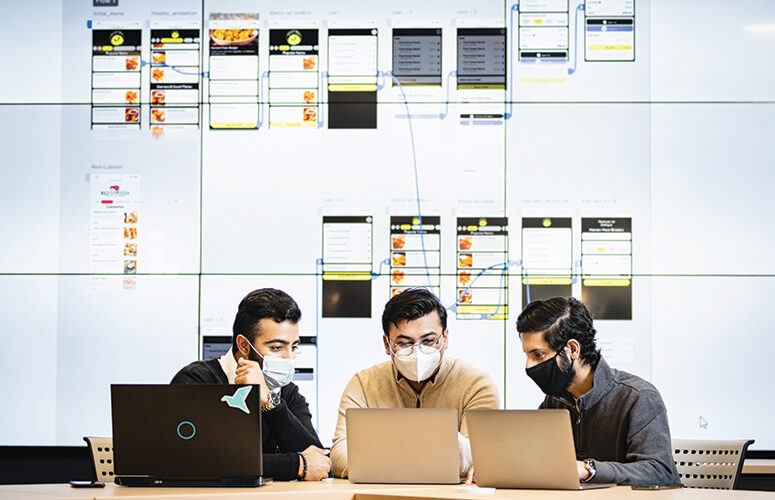 The city has become the perfect spot for startups as venture capital firms and incubators nurture their entrepreneurial dreams.

Welcome to Newark 2022, a city with manufacturing and industrial roots that has blossomed during the early part of the 21st century into a major hub for hi-tech startups. The growth has come with assistance from the New Jersey Institute of Technology (NJIT), Rutgers University, venture capitalists, and corporate partners, along with city and state government entities.

“There’s been a concerted effort, recognizing that if you’re going to create economic development and try and spur it on, you need to have modern technology companies be part of it,’’ says Thomas Wisniewski, managing partner of Newark Venture Partners.

PeduL, which recently received a $100,000 cash grant as part of Google for Startups, is “a diversity recruiting marketplace’’ that helps employers attract diverse candidates for internships and entry-level positions. Two former Rutgers University students, Chisa Egbelu and Kayla Michele, created PeduL with a mission to ensure all students have equal access to academic and professional opportunities.

Another Newark hi-tech startup success story is GlydeApp Inc., which has an app that allows restaurant patrons get food, drinks and pay bills on their cell phones. The fledgling company’s technology is being used at small restaurants, but the founders, including Samir Persori, are seeking capital from Newark hi-tech investors to bring Glyde to national restaurant chains.

Newark is uniquely positioned to continue expanding as a hub for startups and other tech-focused businesses not only due to the range of educational institutions and incubators in the city, but also due to the presence of “dark fiber.”

“Dark fiber’’ is excess fiber optic capacity that technology and utility companies created far beyond their own infrastructure needs, making it far cheaper for companies that followed to obtain a bandwidth bonanza of enormously high-speed internet with huge capacity.

Newark Fiber, with investments from Invest Newark, is a program that offers Gigabit and 10 Gigabit internet connections throughout participating residential and commercial buildings in the city, on city streets and in parks, and eventually single-family homes, according to its website. Invest Newark, on its website, characterizes the initiative as “bridging the city’s digital divide” while creating “a national model for providing high-speed internet to communities in need.’’

Newark’s strong transportation network, its cargo port, proximity to industries with hi-tech needs, and a highly trained regional workforce also make the Brick City a more affordable and convenient alternative to locating in New York City and the Hudson River Gold Coast. The decision by Audible to move its headquarters to Newark in 2007 helped jumpstart the city’s hi-tech emergence, which was further galvanized by this year’s opening of hard-tech accelerator HAX’s US headquarters in the city.

Susan Schofer, a HAX partner and chief science officer, says HAX has a “Call to Action’’ for would-be entrepreneurs in the “hard-tech” sphere, which she categorizes as, “Anything that when you drop it, it hurts your foot,’’ as opposed to software initiatives.

HAX, she notes, is both “local and global,’’ with a focus also in the “deep-tech’’ realm, which involves scientific and technological innovations – particularly clean climate technology – that can be commercialized.

“We’re already up and running,’’ says Schofer, expressing appreciation to the New Jersey Economic Development Authority (NJEDA) for $25 million in funding to get rolling. “We’re looking to add new teams to our portfolio, and we’re really serious about getting going on some of these big challenges.”

HAX plans to open a 40,000-square-foot space next year in downtown Newark, which will include co-working space for start-up teams, major space and workshop areas to develop and refine prototypes, along with a wet lab to assist the needs of climate tech teams and others.

“What’s unique about HAX, versus a lot of other venture investors, is just the very hands-on way that we work with teams,” Shofer explains. “We have the capabilities to help them literally be in the lab and help them figure out how they’re going to scale up and conduct experiments and tests to get to through-points. We also help them build hardware and prototypes.”

Examples of the initiatives HAX is investing in are a company working on automating and robotizing installation of solar roofing, a nascent effort to fight global warming by directly capturing carbon dioxide from the air, and a firm that uses Artificial Intelligence to detect defects in early-stage textile manufacturing – preventing large amounts of knitting material from being wasted.

NJIT, via its New Jersey Innovation Institute (NJII), which strives to drive innovation, and VentureLink, the state’s largest startup incubator, works with HAX, NJEDA, Newark officials, venture capitalists like Wisniewski, corporations and others to further foster Newark’s place in the hi-tech startup world.

Among the companies leveraging investments in Newark’s hi-tech sphere are Prudential, TD Bank, and Amazon via Audible, as well as RWJBarnabas Health in the health-tech arena.

“What we’ve done, very purposefully, is to try to be part of a larger ecosystem,’’ says Simon Nynens, NJII’s former chief executive officer who announced he was stepping down from his post in early August.

“We concentrate on technology-focused companies where we can truly add value,” Nynens explains. “And if we cannot, we should know the partners in our surrounding area that might be better to oversee or to guide you.’’

“It’s not what is good for us – we are a non-profit,’’ Nynens continues. “We spur innovation and job growth. … So, we’re going to do whatever we can to make the world a little bit more just and equitable for all … and Newark is a great place to do so.’’

Nynens recalls a dispiriting study that found only about 2% of funding went to African-American company founders.

William Lutz, director of commercialization and co-director at NJIT’s VentureLink under NJII, says his team’s entry point “is the intersection of entrepreneurship and small business as it intersects with technology in the community.’’

VentureLink’s programming includes its LinkUps Workshop series to help would-be entrepreneurs start and build their companies. On the first Wednesday of each month, there is an Open Coffee Club – Newark, open to all to discuss ideas and build connections. A mentorship program brings valued advice to new entrepreneurs – with schedules allowing them to stay in their current jobs.

So, what of the lure of that big metropolis across the Hudson River?

“We just want to be part of that,’’ says Durkin, citing a priority of helping residents by creating jobs over the next five years as HAX looks to launch a hundred startups. “And then alongside that, our goal … is to be part of mentorship, talent development, and workforce training.”

Wisniewski of Newark Venture Partners says the collaboration in Newark extends to investors.

“Venture generally is not a competition among firms anywhere. You tend to make investments alongside other firms, make your deals with other firms,’’ Wisniewski explains. “So, it doesn’t have that cutthroat sense, which is a benefit when you’re trying to do something like we are.’’

For Wisniewski, the boom in hi-tech startups is fueled by an extraordinary reduction in the relative startup costs since the 1990s – what once cost millions now can be done for tens of thousands. This, in turn, has helped foster the growth of Business-to-Business (B2B) software applications to help other companies be more efficient.

“Most of what’s going on is using the technology that currently exists to solve business problems,’’ Wisniewski continues. “That really favors a place like Newark – New York as well – because of the sheer volume of corporations in the area.’’

What does Wisniewski want to see in a startup before plunking down significant money?

“It needs to be in a market [solving] a problem that makes sense,’’ says Wisniewski, who views success as companies being able to raise ever more capital by growing sales. “What we like to see is that they can double or triple their size in a few years.”

His company’s space is in the B2B software market, investing up to $3 million in seed stage venture capital for local, national and international startups.

Companies that start locally also may soon look to expand nationally or beyond to fuel growth.