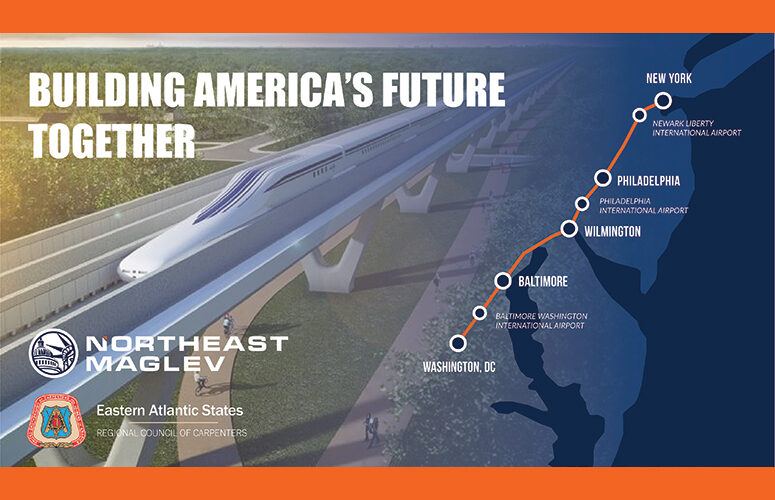 An image of the Superconducting Maglev (SCMAGLEV) high-speed train project that Northeast Maglev is bringing to the Northeast Corridor. Eastern Atlantic States Regional Council of Carpenters (EASRCC) will offer support for the first phase of the multi-billion-dollar project that will ultimately provide one-hour service from Washington, D.C. to New York City, including a proposed stop at Newark Liberty International Airport.
High-Tech

Construction trades look to the future for new jobs and economic growth.

Trains using superconducting magnets to reach incredible speeds and improve public transportation; offshore turbines driven by ocean winds generating electricity: The technology behind these innovative answers to challenges faced by residents and businesses in New Jersey, the northeastern United States, and around the world, is also creating opportunities for the state’s skilled labor force.

Trade organizations are at the forefront of support for these projects and are collaborating with some of the top businesses in these fields to ensure a steady supply of workers trained to meet their workforce needs and demands. A better quality of life and a robust economy are behind the push for current and proposed projects in the pipeline as they navigate review and approval processes.

In July of 2020, Northeast Maglev, the company bringing the Superconducting Maglev (SCMAGLEV) high-speed train project to the Northeast Corridor, joined with the Eastern Atlantic States Regional Council of Carpenters (EASRCC) to announce a partnership offering the labor union’s support for the first phase of the multi-billion-dollar project and the opportunities it will create for carpenters across the East Coast.

Flanked by local elected officials and community leaders, council leaders touted the SCMAGLEV project as an innovative and critical project to stimulate America’s economy and put carpenters to work. The Eastern Atlantic States Regional Council of Carpenters represents 42,000 members in a region that includes the District of Columbia and states such as Delaware, Maryland, New Jersey, Pennsylvania and Virginia.

The SCMAGLEV will start with a 36-mile route from Washington, D.C. to Baltimore City, with a stop at BWI Marshall Airport. Ultimately, one-hour service from Washington, D.C. to New York City, including a proposed stop at Newark Liberty International Airport, will be available. An estimated 70% to 75% of the rail line will be underground. The project is currently under review by federal, state and local agencies as the Federal Railroad Administration (FRA) and the Maryland Department of Transportation-Maryland Transit Administration (MDOT-MTA) prepare an environmental impact statement (EIS).

At the time of the announcement, William Sproule, executive secretary-treasurer of the Eastern Atlantic States Regional Council of Carpenters (EASRCC), says, “The EASRCC is excited to partner with Northeast Maglev on the SCMAGLEV high-speed train project. Our members are the best-trained and most-skilled construction workers in the country and will ensure this project is built efficiently and safely.

“This project will not just be a great opportunity for the journeymen and apprentice carpenters of the Northeast region, but also a monumental step in the future of infrastructure in the United States,” Sproule continues. “With the COVID-19 pandemic creating a serious health and economic crisis for hard-working Americans, investment in infrastructure like this historic project will be the boost our economy needs while bringing our nation’s infrastructure into the 21st century.”

In February, Atlantic Shores Offshore Wind (Atlantic Shores), a 50-50 joint venture between EDF Renewables North America and Shell New Energies US LLC, unveiled a first-of-its-kind memorandum of understanding (MOU) with six unions operating in New Jersey as part of its bid submission, committing to help develop and employ a productive, safe, well-trained local workforce. With the agreement, Atlantic Shores helped establish its position at the forefront of not only the state’s burgeoning offshore wind industry, but also as a creator of new, union workforce opportunities for decades to come.

That agreement was followed in March by the designation of an area in the Atlantic Ocean off the coast of New Jersey and New York by the US Department of the Interior as a “wind energy area,” further enhancing the potential for growth in new jobs and lower energy costs.

Signed by EASRCC, Laborers’ International Union of North America, International Brotherhood of Electrical Workers Local 456, Local 400 and Local 351, International Union of Operating Engineers Local 825, Ironworkers International, and Eastern Millwright Regional Council, the labor agreement is the strongest commitment to date by a US offshore wind developer to train local residents and trades people, and use union labor and employers wherever possible. New Jersey is poised to be a national leader in green economy job creation, and it is corporate partnerships like this that will make it possible.

“Union labor helped to build New Jersey, and if our bid is selected, union labor will be central to building its renewable energy infrastructure and sustainable future,” says Joris Veldhoven, commercial director at Atlantic Shores. “As a developer, we are proud to commit to working with these six unions, training and cultivating a robust offshore wind workforce. We hope this will serve as a model for local labor partnerships in the offshore wind industry.”

Specifically, this agreement outlines how the unions and Atlantic Shores will work together to create state-of-the-art training and apprenticeship programs for New Jersey workers to support not just the project, but the broader offshore wind industry and further integrate union workers into the offshore wind workforce. This includes encouraging suppliers or contractors bidding to be part of the project to enter into labor agreements and support the Helmets to Hardhats program, which helps military and US Coast Guard personnel, as well as National Guardsmen and Reservists, transition into careers in offshore wind.

“The Ironworkers are excited to partner with Atlantic Shores Offshore Wind and the other crafts to be a part of this landmark agreement that will lead to the training and employment of our members in New Jersey,” says Ray Woodall, business manager at Ironworkers Local 11.

“We are proud of the steps Local 825 has already taken to transform our training centers into institutions of higher learning to prepare our members for the jobs of the future. Operating Engineers are poised to be the go-to location for the training required to build green infrastructure in the safest and most efficient way possible,” says Greg Lalavee, business manager for IUOE Local 825. “This signed agreement with Atlantic Shores validates all of these efforts and our partnership ensures that New Jersey is ground zero for these training efforts. We could not be more pleased to be part of this achievement.”

“The economic future for New Jersey, and the country, will rest on our ability to deliver affordable, reliable energy – this means navigating the complicated regulatory processes that engulf siting energy generation and transmission,” says Mark Longo, director of ELEC825. “Anything that streamlines the process is a huge win for all New Jersey. We applaud this proactive step toward making this project a reality through a partnership with the hard-working men and women of the construction trades.”