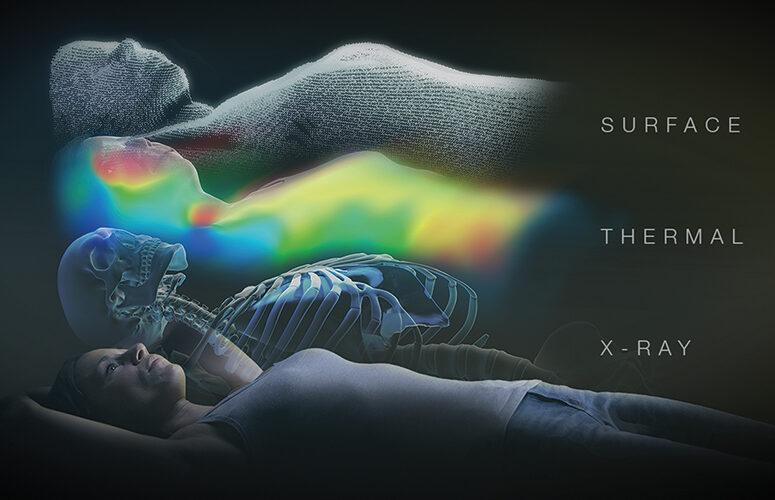 ExacTrac Dynamic tracks body movement through the layers of the body labeled in this graphic at Valley-Mount Sinai Comprehensive Cancer Care in Paramus.
Healthcare

Over the years, it often seemed that the cure was worse than the disease in treating cancer. Patients feared they would emerge from treatment with permanent side effects that diminished their quality of life and ability to function.

Today, New Jersey hospitals are at the forefront of emerging cancer-fighting technologies that enable doctors to extend the lives of patients. Improved screening technologies for early detection and treatments more accurately attack tumors and kill cancer cells with less risk of damage to surrounding tissue and organs.

Improved technologies are critical in keeping up with the spread of cancer in the US, which will increase in incidence by about 45% in the next 20 years, according to Dr. Andre Goy, chairman and executive director of John Theurer Cancer Center at Hackensack University Medical Center. Goy notes that 4,950 new cancer cases are reported and more than 1,700 patients die of cancer every day in the US.

Doctors diagnose a new patient every 30 seconds and every three minutes, two people die from cancer in the US. Part of the reason is increased longevity, but almost half of the cancers diagnosed are related to lifestyle factors such poor diet, lack of exercise, smoking and alcohol.

“Cancer is the result of the random accumulation of genetic mistakes called mutations that disrupt the cells, leading eventually to cancer cells,” Dr. Goy says. Doctors at the John Theurer Cancer Center use a form of immunotherapy known as T-cell therapy to reengage T-cells to fight cancer cells. T-cells are a type of white blood cell that develop from stem cells in the bone marrow and are essential to the immune system in fighting disease.

“The goal of immunotherapy is to restore the natural ability of the immune system to kill cancer cells: Some of the most efficient immunotherapy is called T-cell (re)-engaging therapies,” Goy says. One therapy, CAR T-cell therapy, or CART, lets doctors take a patient’s own T-cells and supercharge them by manipulating them in the lab to kill cancer cells. “We started the CART program here nine years ago. We were the first in New Jersey to have a CART program and we are the largest CART program in the Tri-State area along with Sloan Kettering,” he says.

“With CART, at four years, about 40% of patients with aggressive lymphoma are doing well with no disease – and likely cured – which is unprecedented,” Goy says. The FDA has since approved CART for other types of lymphoma, including mantle cell lymphoma, which is a rare but often chemo-resistant cancer.”

John Theurer doctors also use other forms of T-cell therapy, including one that works through checkpoint inhibitors, which unleashes the immune system to attack the cancer. “This approach has and is changing cancer in almost every organ,” Goy says. “Not just melanoma and lung cancer, where it revolutionized treatment, but also bladder, colon, breast, head and neck cancers, among others.

“It’s important to understand that the advantage of T-cell engaging therapy is that it’s a one-time treatment – once the immune system is reengaged, it continues to work indefinitely,” Goy says.

TAMING THE PATH OF RADIATION

Proton therapy, where doctors can deposit the entire dose precisely on the cancer with little or none of it passing through to damage other organs, has gained widespread acceptance as a treatment with less impact on a patient’s quality of life.

“Proton therapy is being used in treating brain tumors, head and neck cancers, thoracic, lung, gastric tumors in upper abdomen, pancreatic cancer, gynecological cancers, and other cancers and hematologic malignancies such as lymphomas,” Dr. Rahul R. Parikh, a radiation oncologist at Rutgers Cancer Institute of New Jersey and medical director of the Laurie Proton Therapy Center at Robert Wood Johnson University Hospital in New Brunswick, reports. “The data is more and more convincing that it can be superior to use proton treatment over standard X-ray therapy.”

At Valley-Mount Sinai Comprehensive Cancer Care in Paramus, doctors are tracking the patient’s movements with ExacTrac Dynamic technology to track body movement. The technology, expanded with Surface Tracking, takes images of the surface of the patient’s body to show movement during treatment.

“The machine pauses, and we take images with a CT scan to make sure everything lines up correctly,” Dr. Michael Wesson, co-director of radiation oncology, says. The radiation hits the cancer with a margin of just two-to-five millimeters. “For example, there’s less of a dose to the bladder and rectum in treating prostate cancer. That translates into fewer side effects. We use it for a lot of patients, almost anybody getting stereotactic body radiation therapy, which delivers a higher dose with four or five treatments rather than 20.”

Another way to minimize damage to normal tissue is to move the normal tissue, to push the rectum and prostate away from each other, for example. Doctors at Valley Mount Sinai use SpaceOAR, a spacer inserted between organs that dissolves in the body in three months.

“That’s been an amazing change in treating prostate patients. There used to be incidences of rectal problems in 6% to 8% of patients after radiation. Now, it’s less than 1%,” Wesson says.

Another major advance in treating cancer is the genomic revolution that has given doctors the ability to easily test the parts or the entire genome, Goy, of the John Theurer Cancer Center, says. A genome is the complete set of genetic information an organism requires to function. The human genome sequence project took more than 10 years and cost $3 billion, but it produced technologies that can now give doctors an entire genome in one day and for a few hundred dollars.

“It allows us to stop looking at one or two genes and instead look at the entire genetic make-up map of cancer cells,” Goy says, adding that the John Theurer Cancer Center now can test both DNA and RNA signatures in all patients. Two patients with cancers that look the same under the microscope – and are of similar age with other conditions in common – may have different responses to treatment because their cancer cells have a different genetic makeup. “That is the foundation of precision medicine: matching what we know about the patients, including the ‘wiring’ of the cancer cells, to their treatment plans,” Goy explains.

Determining a person’s likelihood of getting cancer is critical to catching it early enough to treat it successfully. At the Lefcourt Family Cancer Treatment and Wellness Center at Englewood Health in Paramus, doctors are using a range of screening technologies from genetic testing to 3D MRIs.

“Genetic testing and early detection have changed outcomes for breast cancer patients,” according to Dr. Steven Brower, medical director at Lefcourt. “All women should have a personal and family history obtained at age 30 to determine if they fall into a high-risk category. For those at high breast cancer risk, Lefcourt doctors do advanced genetic testing in order to develop a personalized treatment plan.”

All mammograms at the Lefcourt Cancer Center use breast tomosynthesis (3D mammograms). Doctors there also use breast ultrasound, which Brower says is better than mammography for identifying cysts and masses. For those at highest risk, and for women with a personal history of premenopausal breast cancer, Lefcourt’s cancer doctors may use breast MRI, which Brower says is the most sensitive imaging tool for detecting breast cancer at the earliest stages.

The data from measuring patient outcomes, including their quality of life and ability to function after treatment – along with data from the patient ecosystem, will redefine cancer care, Goy notes. However, he also emphasizes, “The quality of life depends enormously on patient engagement in his or her own recovery. It is really important that people change their lifestyle as needed, exercise more, do the things they can do to help themselves recover better – and which have been shown to reduce recurrence and improve outcome.”