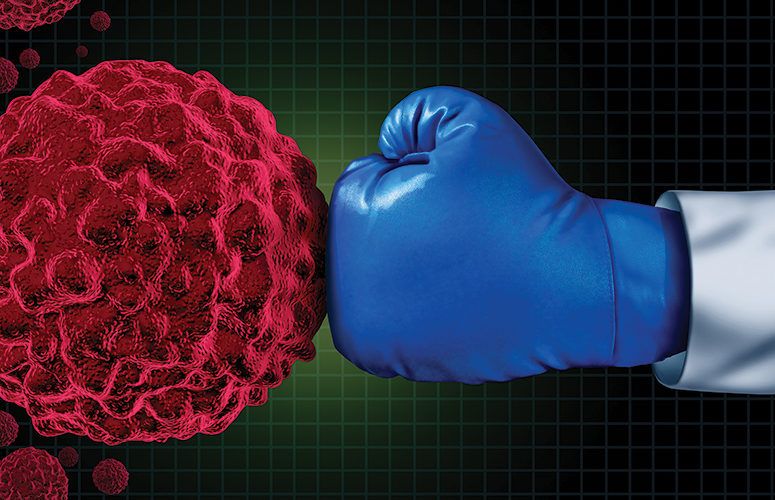 Multiple partnerships and many avenues of support create a thriving R&D culture for the development of state-of-the-art cancer therapies.

New Jersey’s lifesciences industry is always the heavyweight champion that retains its prized belt in the global fight against cancer. It does so by continuously developing drugs that eradicate the disease entirely or keep it at arm’s length from patients, in turn, improving the quality of life of those suffering from cancer in its various forms.

According to Debbie Hart, president and CEO of BioNJ, the trade association that represents the state’s biotech industry, cancer drugs currently account for 27% of all new drug approvals in the United States since 2010, a dramatic increase from the 4% share of the 1980s. “Much of that medical innovation has come directly from the Garden State,” Hart says. “In fact, year after year, oncology is the No. 1 area of research being conducted in the state, with New Jersey’s oncology clinical trials activity above the national average.”

So far in 2019, there have been 33 novel U.S. Food and Drug Administration (FDA) approvals, with nearly half coming from companies with a footprint in New Jersey. “In fact, of the seven novel drug approvals in oncology so far this year, four are from New Jersey companies: Bayer, Novartis, Janssen and Impact/Celgene,” Hart says.

Dean Paranicas, president and CEO of the HealthCare Institute of New Jersey (HINJ), reports that New Jersey biopharmaceutical companies have more than 350 drugs in development to treat a wide range of cancers. “This includes pioneering work being done by our companies in immuno-oncology, such as CAR T therapies, treatments aimed at helping the body’s own immune system fight cancer, and checkpoint inhibitors, another form of immunotherapy that is rapidly becoming an established part of everyday cancer care,” he says.

Hart adds, “New Jersey is the birthplace of immunotherapy, discovered by BioNJ founding member, Medarex. Since that time, the medical innovations coming from the state have remained unprecedented, from the FDA approvals of Bristol-Myers Squibb’s Opdivo and Merck’s Keytruda (which former President Jimmy Carter has credited for shrinking his brain tumor completely) to the first-ever FDA approved CAR T cell therapy by Novartis.”

Yes, there are the legendary big pharmaceutical companies that continue to play major roles in developing cancer-fighting drugs, but the state is home to numerous emerging biopharmaceutical companies with groundbreaking cancer drugs in clinical development, such as Celldex Therapeutics, Rafael Pharma, Immunomedics and Adgero Biopharma, according to Hart.

The development of these therapies does not occur in a vacuum. Many lifescience company innovations are achieved in partnership with the state’s institutions of higher education and hospital networks.

“Many of our top-tier life sciences companies are supported by a wealth of talented and highly educated professionals, a strong network of vendors and suppliers, and world-renowned research universities, excellent hospitals and other healthcare providers,” Paranicas says.

A leader in this collaborative partnership is the Rutgers Cancer Institute of New Jersey (CINJ), the state’s only National Cancer Institute-designated comprehensive cancer center and one of only 51 nationally. “For years, New Jersey’s biopharmaceutical companies have worked with CINJ investigators to conduct clinical trials for new and enhanced cancer treatments,” Paranicas explains.

Hart adds, “Collaboration between, amongst and across companies and institutions has become increasingly important over the last 15 years. Long gone are the days when companies approached discovery in silos. Partnerships in discovery, development and commercialization are critical in getting therapies and cures to the marketplace faster and more efficiently.”

Government, whether state or federal, has also been a partner in supporting the lifesciences industry, and in turn, its initiatives to combat cancer.

Hart points to the Murphy administration and its many efforts to support the lifesciences ecosystem, such as increasing the number of incubators and accelerators in New Jersey, bringing back the state’s Commission on Science, Innovation and Technology, as well as implementing new financial incentives, such as a grant program that will help companies applying for SBIR/STTR grants, and an increase in the Angel Investor Tax Credit from 10 percent to 20 percent with an additional 5% for minority and women-owned businesses, as well as instituting a free rent program for start-ups. “These are tangible and concrete initiatives that are already making a difference for the biopharmaceutical industry,” she says.

Hart touts the 21st Century Cures Act, passed by Congress and signed into law in December 2016, as helping spur innovation in the lifesciences. It included $1.8 billion in Cancer Moonshot funding, $1 billion of which has been appropriated over the last three federal fiscal years. “This funding is being invested in an array of cancer research, from the development of personalized treatments to initiatives aimed at childhood, hereditary, and other cancers,” she says. “The 21st Century Cures Act has been a jumpstart for biopharmaceutical research in New Jersey and throughout the US.”

Asked about pending federal legislation that may hurt cancer research, Paranicas mentions H.R.3. It is a “radical proposal to control drug pricing that would not only utterly devastate medical innovation, but also pose the danger of decimating New Jersey’s economy. We could lose roughly 54,000 New Jersey jobs and $15 billion in annual economic output for the state. The bill’s proposed price controls would do little to help patients afford their healthcare, while arresting the progress the life sciences sector has made in advancing human health,” Paranicas says.

He says the industry is also looking for a permanent repeal of the medical device excise tax. “While the tax was in place from 2013 through 2015, thousands of good-paying jobs were lost, patients were denied new treatments and research and development projects were abandoned. Both the Senate and House have previously passed repeal legislation; now is the time for Congress to end this punishing policy before the current suspension expires on December 31,” he concludes.

The fight against cancer is multifaceted. It truly is an ecosystem of lifescience firms, institutions of higher education, hospitals, and state and federal governments all working together to bring lifesaving solutions to patients around the world. And as previously mentioned, the vast majority of solutions continue to emanate from New Jersey.