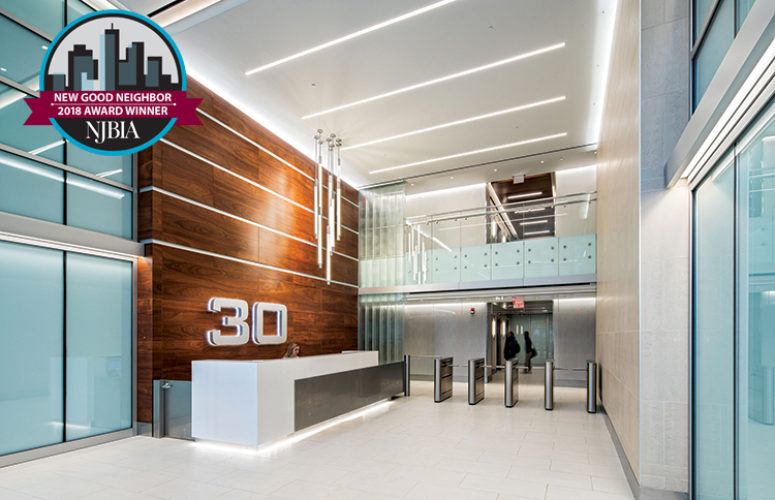 In early 2014, Stephen Sullivan, chief investment officer of Onyx Equities, stood with his asset management team assessing the 15-story office building at 30 Montgomery Street, Jersey City. The team had just completed massive repairs required following Hurricane Sandy, but had a major decision to make about the future of the 313,000-square-foot office tower: Would they maintain the complex as a B building by spending $1 million to $2 million on minor cosmetic renovations, or would they go all the way with a $20 million overhaul?

The building was built in 1974 at the corner of Montgomery and Greene streets, so the interior was completely outdated. What’s more, there was no connection between the building and its business and residential neighbors.

Nevertheless, Onyx and its then co-owner, Rubenstein Partners, decided to take on the full transformation. At street level, the former cave-like overhang was repurposed into 7,580 square feet of rentable storefronts. The new, publicly accessible space was leased by Cava Grille, B. Good and FedEx, with additional space under negotiation. Operations in the new retail level created an estimated 50 new jobs.

Over 18 months, 30 Montgomery’s scope of work included reconfiguring the façade, vaulting the lobby, replacing tenant HVAC controls, installing a new conference center, renovating elevators, landings and restrooms, and replacing nearly 1,800 windows. With occupancy during this time at some 80 percent, a major management priority throughout this period was to minimize the impact of construction on tenant operations. Approximately 150 construction jobs were created during renovation.

The capital improvements at 30 Montgomery transformed the building into an inviting yet secure place to host businesses, which employ 1,200 people, and significantly changed the site’s role in the neighborhood. The base of the building, with its iconic “30” logo, now serves as an amenity to the surrounding blocks. The upper floor finishes, ample light and energy efficiencies meet today’s standards of workplace productivity and employee comfort.