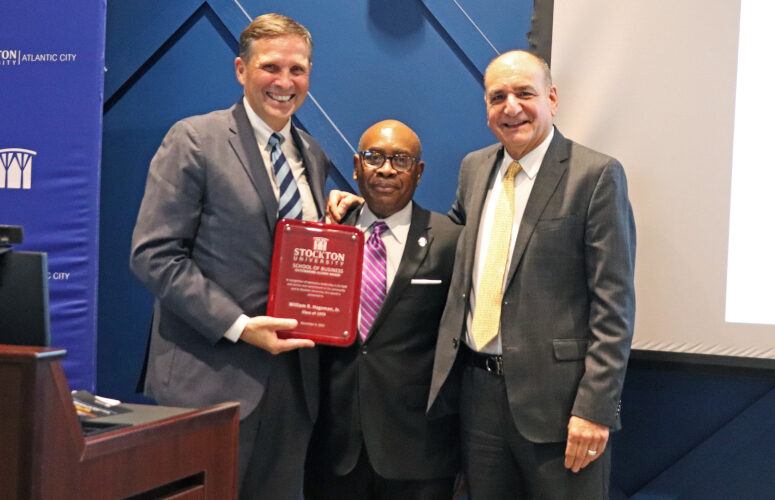 William R. Hagaman, Jr., Stockton Class of 1979, almost didn’t make it through his freshman year. Due to a variety of circumstances, he just did not have the money to pay for his second semester. He went to say goodbye to his preceptor, Professor Charles Yeager, and instead left with a personal check from Yeager to cover his tuition and books.

“If not for him, I probably never would have gone back to college, and I would not be where I am today,” an emotional Hagaman said after receiving the inaugural Outstanding Alumni Award from the Stockton University School of Business in a ceremony Nov. 9 attended by more than 75 friends and family at the John F. Scarpa Academic Center at Stockton Atlantic City.

Hagaman, a resident of Monmouth County, is now the managing partner and chief executive officer of WithumSmith+Brown, P.C. (Withum), the 25th largest accounting, tax and advisory firm in the country, with some 1,500 employees.

Hagaman also announced his commitment to fund a new First Generation Student Endowed Scholarship, in perpetuity. Starting in 2023-24, two first-generation college students in the School of Business will receive a $2,000 award to help defray their college costs. This was the same amount given to him by Professor Yeager.

“When I was here, I was a first-generation college student,” Hagaman said. “I was the oldest of six. My family had no money. We were on food stamps. But I was determined to go to college. My hope is to help another young person in similar circumstances.”

He chose Stockton because it was close to his home in Ocean County and it was affordable. He worked full-time while attending college, and said Yeager’s generous check, which Hagaman later repaid, was just one of several inflection points during his time at Stockton that helped him find his path in life and be successful.

“Stockton accepted me, and gave me my first opportunity,” Hagaman said, noting in high school he was pretty much a “C” student, but found the motivation to get “A’s” at Stockton from his professors.

He said when Stockton’s Dean of the School of Business Alphonso Ogbuehi told him he would be the first recipient of the Outstanding Alumni Award it got him thinking about what his time at Stockton had meant to him.

“Stockton has always been in the back of my mind,” Hagaman said. “But I don’t like to look back. I like to look forward. So, I began thinking how I could pay it forward.”

Stockton President Harvey Kesselman said scholarships like Hagaman’s have a huge impact on students. “This kind of gift really makes a difference in their lives,” Kesselman said. “This can be the difference between staying and leaving. We could not be more proud that Bill is recognizing his alma mater.”

Dean Ogbuehi said the School of Business has made a commitment to reaching out to alumni and making connections that can help current students with mentorships, internships and scholarships.

Stockton Chief Development Officer Daniel Nugent noted that the scholarship agreement was signed during National First-Generation Week, when Stockton is highlighting its First Ospreys Initiative to help first-generation students succeed. Almost half of Stockton students are the first in their families to attend college.

“Not only will you make a difference in the lives of students who receive the awards, but you can also inspire more of our 13,000 business alumni to do the same,” Nugent told Hagaman.

Stockton Board of Trustees chair Raymond Ciccone was a classmate of Hagaman’s at Stockton. “Every accounting student can look up to him,” Ciccone said. “He was a commuter and first-generation student who rose to become CEO of one of the largest accounting firms in the country. He took that firm to another level. We are so proud you are one of our classmates.”