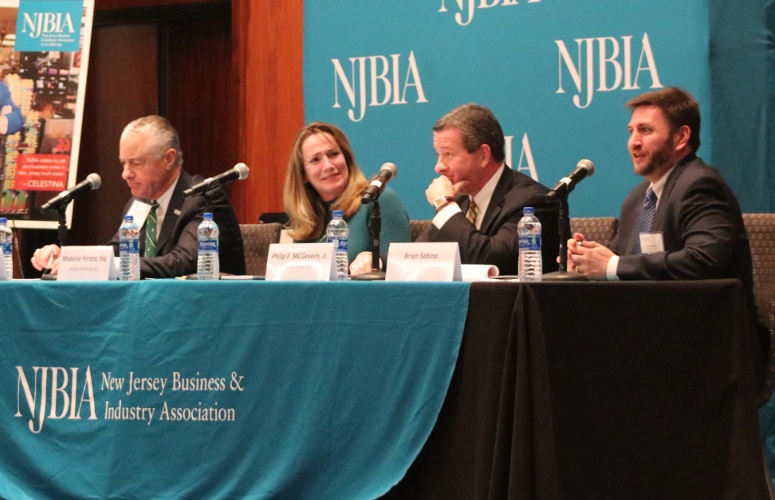 A recurring theme among New Jersey leaders for several decades has been the wide gulf between the state’s notably positive attributes and its tax environment/debt concerns, the latter which negatively affect each New Jerseyan. A host of other elements sometimes means that businesses here are optimistic about their own growth, but not necessarily the state’s overall trajectory.

During an Economic Outlook Panel discussion at yesterday’s 2019 NJBIA Public Policy Forum, panelists repeatedly cited the state’s high quality of life, its ideal location between Manhattan and Philadelphia, its superb school systems and its complex transportation networks.  The cantilever’s other end, however, had panelists citing the state’s widely-publicized financial woes.

Walter J. Brasch, CPA, CGMA, chief success officer, Prager Metis CPAs, told the audience that while Pennsylvania is running a budget surplus, “The current financial position of [New Jersey] is a negative $135 billion, as of June 17.  We are doing something wrong, folks. And we are going to come to this day [of reckoning], soon. It is all here; it is for your reading. This [Comprehensive Annual Financial Report (CAFR)] is designed to tell people who we are as a state, and a government.  All our school districts issue these things – and I tell you to get involved and I tell you to get involved in reading it, because this debt is going to sink the state.”

If there was a modicum of balance between the extreme positives and negatives for New Jersey, Brian Sabina, senior vice president, economic transformation, for the New Jersey Economic Development Authority, said, “One of the things I think we are missing here in New Jersey – and what happens in Boston or North Carolina, or California – is that some of the connective tissue between our corporate citizens, the startup community, our academic institutions [is less]… We are working in a lot of silos, and there’s not as much collaboration among people across those particulars [as in those other states]. That is something we’re really focused on increasing.”

Brasch meanwhile asserted that changes to federal tax law have helped some of his clients, and, perhaps surprisingly, that the “jury is still out” about the federal limitation on SALT deductions.   For the federal tax changes, he said, “In my office last tax season, we had a projection calculator that could take your income, report that on the law that was written back in the winter time, and you would be surprised how many people actually came out the same, or actually got a refund.  I am talking two earner couples; $15,000; $20,000 in real estate taxes. I think that the jury is still out about this whole SALT thing. I will just tell you.”

Panelist Madeline Ferraro, Esq., vice president for Government & Public Affairs at Atlantic Health System, said, “A big, wet blanket has gone over the real estate market, and now it is completely flat, and not just in the markets where SALT has taken effect, but all across the country.”

She added, however, “New Jersey really is a great state, and I do agree about changes that have to be made, and we really do have to get a handle on [municipal] consolidation, because it has come to the point where there are almost 600 municipalities.”

Overall, again, businesses seem to be faring relatively well, but the specter of Wall Street’s volatility was yet another factor mentioned in the undulating positive/negative dialog which pervaded the nearly hour-long panel discussion. Moderator Rick Thigpen, senior vice president – corporate citizenship, PSEG, seemed to be trying to balance the discussion between the state’s and business community’s triumphs and challenges.

Five Estate Planning Tips of Which Benjamin Franklin Would Approve

How NJBIA Membership Benefits Your Business