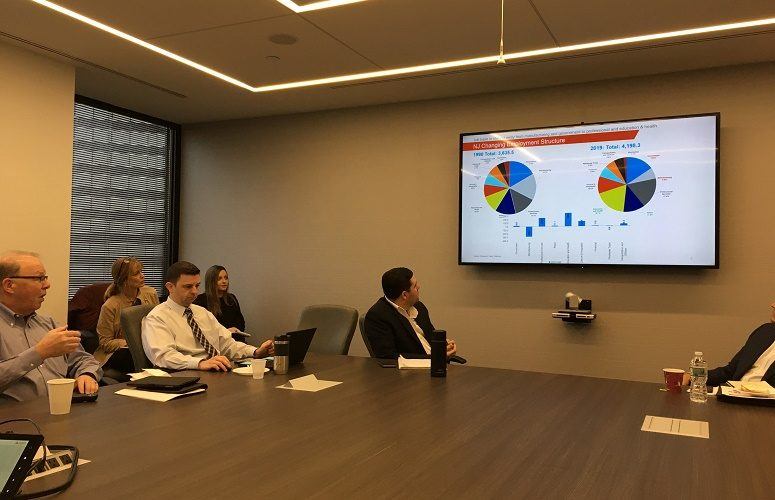 E-commerce is de facto enough that Tucci said that younger generations “don’t know any different,” and e-commerce shows no signs of slowing; it effectively has no growth limit, since it thus far only accounts for less than 20 percent of retail sales, he said.

Perhaps fewer people may be aware that New Jersey’s office real estate market is faring well, with, for example, “Class A net absorption accounting for 69.3 percent of the 1.3 million-square-foot annual total,” according to C&W data.

Dan Johnsen, executive managing director, said, “We continue to see brand-name companies remain in New Jersey, and certainly expand in New Jersey – companies like LG, Samsung, Octapharma, TEVA [and] CIT. [The year] 2019 certainly speaks for itself as a good year for office leasing.”

He added, “A strong handful of deals that did not get signed at the end 2019 are going to carry over into the first quarter. I think that velocity thus far is incredibly strong across all markets, and that is really relating to touring activity. We are seeing that [all the way from] Morris County, to Newark and the [Hudson River] waterfront.”

He is notably “not” seeing “uncertainty” in signing leases, which could be indicative of a slowing real estate market.

Executives today noted that companies are not necessarily seeking bland, outdated office spaces, but instead desire, again, “amenity-rich” facilities catering to a workforce that seeks such products.

Are non-car-owning, urban-dwelling, “cool” millennials shaping the whole office market as companies seek to hire them?

While there was mention today of “shuttle service” and “mass transit” for employees, C&W’s New Jersey Market Leader Andrew Judd answered a more basic question about workforce demographics and their desires.

He said, “The millennial effect is a snapshot in time. This is what their lives look like, right now … they are single and want to be in a hip environment…”

Judd explained that when they are older, they may want the suburbs and its school systems, explaining, “you may see more of a migration out to the suburbs … to be determined.”

In broader terms, later addressing a question about New Jerseysans leaving the state due to high property taxes and other woes, he said, “With all due respect to [the media], don’t believe everything you read. I think New Jersey has proven over the past 20 years – at least – that we are successful almost despite ourselves. Are taxes high? Yes. Is infrastructure in need of repair? Yes. But, wholesale migration of the entire state and a ‘brain drain’ hasn’t happened because of all the positives that Jersey has, and the positives certainly outweigh the negatives.

“We still have a well-educated labor force. We still have a robust transportation network. We still have proximity to the capital of the world – New York City. None of that is ever changing. You have great educational institutions. The idea of New Jersey still being the medicine cabinet to the world is still – by and large – very true.”

And such a response paves the way for New Jersey’s perhaps surprisingly adept retail sector, which has been nonetheless subjected to “correction, change and transformation,” according to Retail Team Lead David Townes.

Yes, media headlines reveal the decline of the “Sears” and “Payless Shoes” of the world, but at the same time, Townes said restaurant leasing is “on fire” in New Jersey, feeding retail growth the state.

Senior Associate Alana Friedman meanwhile explained that specialized fitness clubs – for which some people have memberships to more than one – are also a vibrant retail component.  Co-working spaces are additionally a retail space factor, including but not limited to those in the beauty-, health- and wellness-salon spheres.

Retail at times might also be increasingly “experiential” for consumers, Townes said, with one northern New Jersey donut chain location showcasing “a glaze waterfall and donuts,” for example. 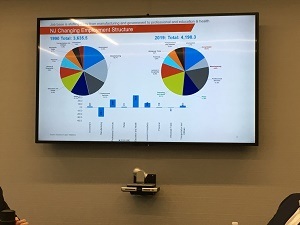 Judd said, “[New Jersey] doesn’t have the ‘out of business’ sign on the door. I think there are smart people in Trenton and elsewhere who realize we have to be competitive with our neighboring states, and we have to do something that is smart. So, if the constituency believes that the state was giving away money like a drunken sailor – I don’t know if that is true – but, certainly there needs to be some more stringency in what we look at.

“When a company says – putting a gun to [our] heads – ‘Give me this, or else I am going elsewhere,’ I think the state has to say, ‘Show us. Prove to us that you actually have a deal somewhere else, and then we will come to the negotiating table.

“And then everybody would feel good about it. [People can then say,] ‘Look, we were really in jeopardy of losing jobs and all the things that come with it. We had to do this to stay competitive.’”

He added, “I think that you’ll find that 20 years from now, folks in New York and Long Island City, specifically, will be kicking themselves in the head for what they thought was a smart decision of not to bring Amazon into their economy.

“They will see what that meant. Long Island City I think will remain a tertiary market for a while, when it could have been the new hub for everything else – and have an effect on the tristate area.”