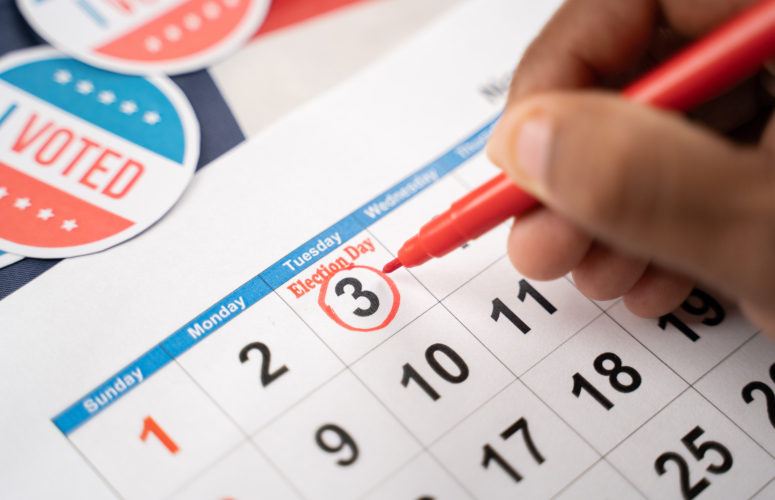 What to Expect on Election Night … and Days Afterward

What can Americans expect tomorrow night as they turn to the news for the latest updates on the presidential election? Will a projected winner be announced? Or will we need to wait days or weeks for mail-in ballots and provisional ballots to be counted?

This is clearly an election like no other, and Micah Rasmussen, director of the Rebovich Institute for New Jersey Politics at Rider University, tells New Jersey Business that if Americans want to know who wins the presidential election, they will have to be patient.

“I believe that the vast majority of Americans want every last vote to be counted. The partisans on both sides think that is not going to help [their candidate] cross the finish line, but the fundamental sense of equal opportunity to vote and have your vote counted is what is going to sustain us through the days of uncertainty,” Rasmussen says.

When asked how soon we may know the results of the presidential election, Rasmussen looks at Pennsylvania, a pivotal state for both candidates, where the Pennsylvania Attorney General said he believes results will be coming in by Wednesday morning.

With machines being able to process 12,000 ballots per hour, “that brings us anywhere between one to three days [after the election],” Rasmussen says.

Overall, he says we will have numbers tomorrow night, but perhaps not final numbers. This is because provisional in-person votes made on Election Day must be verified before they can be counted.

“The reason they are provisional is because we have to make sure another ballot wasn’t cast in [the person’s name]. That is going to take up to 10 days to process and count,” Rasmussen says.

New Jersey is ahead of the game in processing its mail-in ballots (3.5 million already sent in), Rasmussen says. Therefore, we will know results sooner than Pennsylvania.

With that, the state may know on election night who may be winning by a large margin.

“If someone is ahead by more than the outstanding number of ballots, then we can draw a reasonable conclusion that [the other candidate] will not be able to make up the difference. … Again, it doesn’t mean that we will have a definite answer … it doesn’t mean we will have an ‘every-vote’ answer,” says Rasmussen, who adds that provisional ballots would still have to be counted.

Asked if those on the extreme left and right of the political spectrum will accept the results of the election, especially since much doubt has been cast surrounding the security of mail-in ballots and voter fraud, Rasmussen says, “I don’t know if the hyper-partisans are going to accept the decisions. The best remedy we have against the potential for unrest is certainty, transparency and openness. If we have a clear indication of who wins this election – if the result is not razor close – is everyone going to accept that? Not everyone will, but most Americans are going to say the ballots have been cast fairly, and accept the outcome.”

In making his personal predictions, Rasmussen believes Joe Biden will win the presidency based on his stable poling numbers these past two years, with a consistent eight to nine percentage-point lead over President Trump, as well as Biden’s fundraising that has outmatched Trump’s.

“One of the real mysteries is how President Trump ended up on the short end of the fundraising stick as an incumbent president,” he says. “The fact that Biden is awash in funding right now is a measure of how his contributors view his chances [of winning].”

When reminded that Hillary Clinton was leading in the polls during the 2016 election, but lost the race via Electoral College votes, Rasmussen says, “Clinton’s lead was three to four percentage points then, vs. Biden’s eight to nine percentage-point lead now. Additionally, Clinton was floundering in battleground states in way Biden is not.”

Rasmussen sees the ballot question regarding the legalization of recreational marijuana for those 21 and over polling at a 60% approval rate. “If we know that 75% to 80% of results are in, that [60% approval rating] will hold up even if the rest of the ballots have not come in against it,” he says. He does caution that this does depend on the number of Election Day provisional ballots that would need to be verified. “If there are hundreds of thousands of those, that can conceivably sway the outcome,” he says.