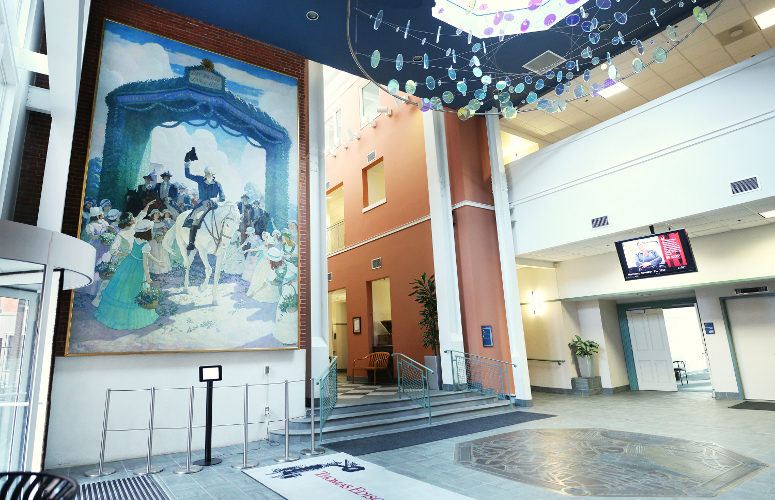 Donation is most generous gift ever given to the University

Wells Fargo has donated a historic N.C. Wyeth painting to Thomas Edison State University (TESU) in Trenton. Appraised by Southeby’s, the value of the painting was not made known, but a Wells Fargo represented contacted by New Jersey Business magazine said it was “priceless.” It is the “most generous gift” ever made to TESU, according to the institution of higher education.

The painting titled “Reception to Washington on April 21, 1789, at Trenton on his way to New York to Assume the Duties of the Presidency of the United States” has been on loan to the university from the bank since 2013. In November, paperwork was finalized to allow the painting to become the sole property of the university.

“N.C. Wyeth’s ‘Reception to Washington’ is an important part of Trenton history, and we have been honored to display it in our foyer for several years,” said Dr. Merodie A. Hancock, president, Thomas Edison State University. “We are extremely happy to receive this beautiful and historic painting from Wells Fargo and look forward to showcasing it even more in the future.”

The oil on canvas mural was commissioned in 1930 by First Mechanics National Bank (a legacy company of Wells Fargo) and had been on display at 1 West State Street. But when the bank moved its downtown branch to the Capital Center at 50 East State Street, the new space could not accommodate the 17-foot-tall by 12-feet-wide mural.

“As a financial institution with more than 200 years of history in the state of New Jersey, we understand how important it is to maintain our historical treasures,” said Wells Fargo Region Bank President and Thomas Edison State University board member Carlos Arroyo. “We’re thrilled that this heirloom was able to find its home here at TESU, an institution that is doing outstanding work right here in the heart of the state capitol.”

N.C. Wyeth, who lived from 1882 to 1945, was one of America’s greatest illustrators. During his lifetime, Wyeth created more than 3,000 paintings and illustrated 112 books. According to the Brandywine River Museum’s N.C. Wyeth Catalog, the artist used an article published in the Columbian Magazine on April 25, 1789, that describes Washington’s entrance into Trenton as a reference for the mural’s creation, which he painted in his studio in Chadds Ford, Pa.

“This extraordinarily generous gift of the beautiful N.C. Wyeth painting represents the most unique gift in our history,” said John T. Thurber, vice president, Public Affairs, Thomas Edison State University. “We are grateful to Wells Fargo for this remarkable expression of support for our mission, which also reflects our shared commitment to Trenton. The painting depicts an important moment in our capital city’s history. It is a great privilege to continue to display it within our Trenton campus, just a short walk from where the events it depicts took place in 1789.”