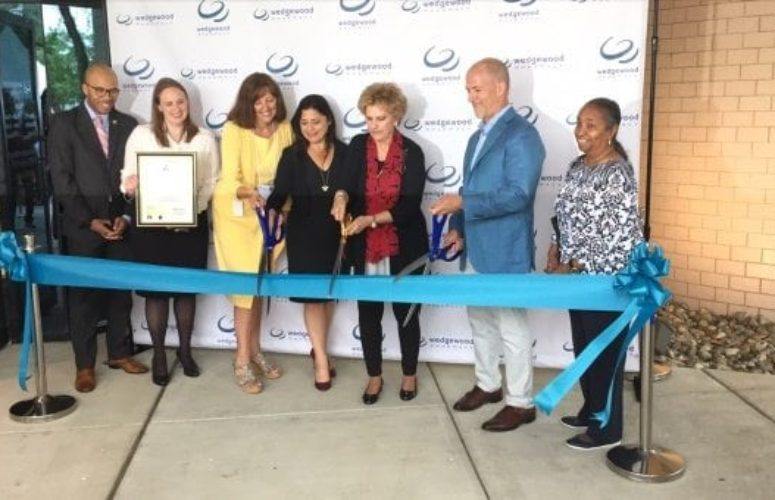 Wedgewood Pharmacy in Swedesboro, the largest compounding pharmacy in the United States preparing personalized prescription medications primarily for animals, yesterday held a ribbon-cutting for its new marketing/sales space and call center. The expansion – which increases the company’s square footage at the site from appropriately 40,000 square feet to 60,000 square feet – is replete with height-adjustable “sit/stand” desks for its workers and an overall open architecture/collaborative workspace.  Wedgewood Pharmacy serves 30,000 prescribers per year across the United States, and “hundreds of thousands of pet owners,” according to Director of Marketing Jodi Donohue.

The call center expansion accommodates the pharmacy’s growth. Wedgewood Pharmacy was founded in 1980 and moved to Swedesboro in 2003, with just 30 employees. The company had 183 workers in 2012, and today has nearly 350 employees, with 26 current job openings, according to President and CEO Marcy Bliss. Underscoring the increase in employees, Bliss told the audience at the ribbon-cutting, “Wedgewood Pharmacy has grown so much since we have been in this facility.”

Among other dignitaries at the event was Heather Simmons, one of Gloucester County’s seven freeholders. She told the audience, “It is so important to us here in Gloucester County to honor you, the employees of Wedgewood, and also your leadership.  This company started in Gloucester County, and when you had an opportunity to grow, you chose to stay in Gloucester County. Now, you are hiring more and more people from the county and the area, and expanding, here.

“That’s the vision for what we want to do in terms of economic [growth], not only for Gloucester County, but for the region. Thank you for your commitment to our region, to the education and development of your employees and to the services that you provide to your patients.”

A proclamation on behalf of the New Jersey General Assembly and the New Jersey Senate was unveiled at the event by Assemblyman Adam J. Taliaferro, who represents the 3rd Legislative District in Gloucester, Salem and Cumberland counties. Meanwhile, Wedgewood Pharmacy’s Donohue told NEW JERSEY BUSINESS that the company plans to “continue to expand lab operations in the next year.”

Of note, Wedgewood Pharmacy was honored with a 2015 Award for Excellence from the New Jersey Business & Industry Association, which wrote at the time, “As demand for [Wedgewood Pharmacy’s] compounded preparations grew, the company set out to improve its technology and processes to meet demand, while maintaining the high-quality of its preparations and superior customer service. First, it combined two separate software systems into a single platform. Then, the company launched a training program to teach employees how to use the new system and to reassure them about the impact the new technology would have on the workplace. Employees were made aware of the business reasons for the changes and the value the system would bring to the company. They were even included in testing the new system before it was rolled out. This allowed the company to improve its processes for order preparation and shipping. … These changes reduced the wait time for prescriptions by almost three hours without removing anything of value from the process.”