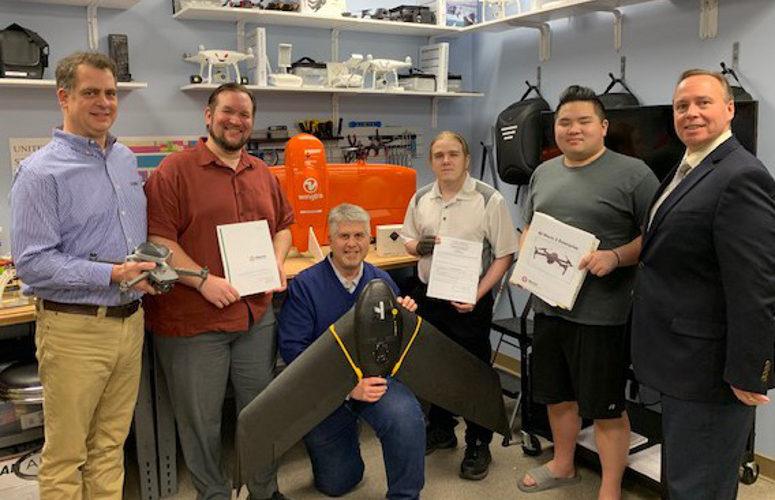 Despite what you see on TV ads and in movies, not every organization or business has the legal right to commercially fly drones in the United States over public spaces that includes people.

Warren County Community College, a small rural-based college in Northwest New Jersey, is one of those who the FAA has authorized to do so, because of their ability to mitigate risks associated with such operations.

“This designation gives us greater access to the sky!” said Dr. Will Austin, president of WCCC and the college’s main drone instructor.

In early February, WCCC, which launched a comprehensive drone training program two years ago, became the 1st community college in the nation to get a Federal Aviation Administration (FAA) Part 107.39 waiver to fly drones over people not directly involved in their operations. There are less than 100 organizations that have ever been given this waiver from the FAA as of the beginning of February 2020. WCCC can now fly its drones during the day over people and also at night (from a previously achieved FAA waiver).

Only three universities (Stanford U., University of Texas at El Paso, & Regents of the University of California) have this waiver, putting WCCC in big – and exclusive – company.

“I think this is an achievement that we can brag about,” said Dr. Austin. “Not everybody has this designation. Amazon doesn’t. NBC & CBS do not. FedEx does not have one and Princeton doesn’t either. Many Fortune 500 companies continue to work toward this designation. But we now have it. For the most part, you can say that almost everyone else on the planet doesn’t have it. So yeah, we are very, very excited and proud to be one of the first. The key to achieving this waiver is the focus we place on safety, on decreasing risk in our operations, and in developing pilots that have the knowledge and experience for the next generation of unmanned aircraft advancement.”

Three years ago WCCC first recognized the emerging drone industry. WCCC saw that more and more businesses and other entities were utilizing drones for a variety of functions, from roofing projects, to photographing weddings and other social events, as well as real estate photography, search and rescue, and even off-shore activities. Drones are also used to locate victims of natural disasters, to track down fleeing criminals and poachers, as surveillance, on movie sets, and even in agriculture. Drones, also known as unmanned aircraft vehicles (UAV), have been a fast emergent technology that is clearly having a major impact in today’s world and WCCC strives to be a leader in that effort. New uses for drones are being discovered every day and WCCC positioned itself to become a premier training center for new pilots. To that end, the college built a state-of-the-art training laboratory and a one-of-a-kind outdoor flight training center on its campus. With its rural geographical location in Northwest Jersey, the college has the added advantage of not being too limited by airspace restrictions.

Add all this up and this makes the FAA designation even more impressive – and it makes sense to train pilots where safety comes first in their learning.

The process was not simple, by any means. Dr. Austin got plenty of help in preparing the 380+ pages of documentation for the designation, from a group of people that might surprise you.

“The actual interesting part is that writing the waiver took months and when completed was about 380+ pages,” said Dr. Austin, a certified AUVSI TOP, Level 3 pilot. “It became a class project. It was my (drone) students in the Introduction class who wrote this with me as part of their fall course final grade. I asked them if they just wanted to just learn from a book, or if they wanted to be part of the future of aviation, by achieving something, few if any other students across the country could do? They rose to the challenge.”

Yet even more impressive is that WCCC was approved on its first submission (with zero rewrites).

“It shows how 1st year students can rise to a challenge that many corporate employees cannot achieve,” said Dr. Austin, adding that obviously you can’t deliver packages by drone if you cannot fly over people’s heads. Dr. Austin boasted, “As their teacher, I have them doing research as well, that would rival what any Tier 1 Research University student might expect to accomplish!”

Actually, Warren has a history of asking its students to go that extra step towards their educational goals. That is why in part, that WCCC has boasted the top graduation rate for community colleges in New Jersey for several years, and most recently, was ranked a Top 20 school for student success in the United States.

In a recent report released by The Chronicle of Higher Education, the country’s premier publication for two and four-year colleges, WCCC was ranked No. 11 in the country. No other NJ community college was in the upper echelon of the ranked list. The rankings were based on “students who are seeking an associate degree or preparing to transfer to a four-year institution … and who have completed their degree within 150% of the normal time.”

“We make it a priority to work closely with our students and to challenge them in order to give them the best possible edge moving forward,” said Dr. Austin. “It’s something we emphasize at every level. The students understand that we want them to succeed and we will do everything we can to provide them with the tools to do so. By challenging them, they understand that it will go a long way in achieving their goals.”

Austin added, “Where others see students and test them to prove they need remediation, we abolished remediation, and instead of making money for the testing industry, we said, ‘You can succeed and we will show you how!’ Then the students win.”

In a similar vein, WCCC’s nursing program continues to be ranked among the best in New Jersey in a variety of categories, including “Best Value”. This latest designation was released by NursingExplorer.com, citing WCCC’s overall value to the community. In the report, WCCC is ranked No. 1 in North Jersey, and No. 2 overall out of 70 nursing programs throughout the state.