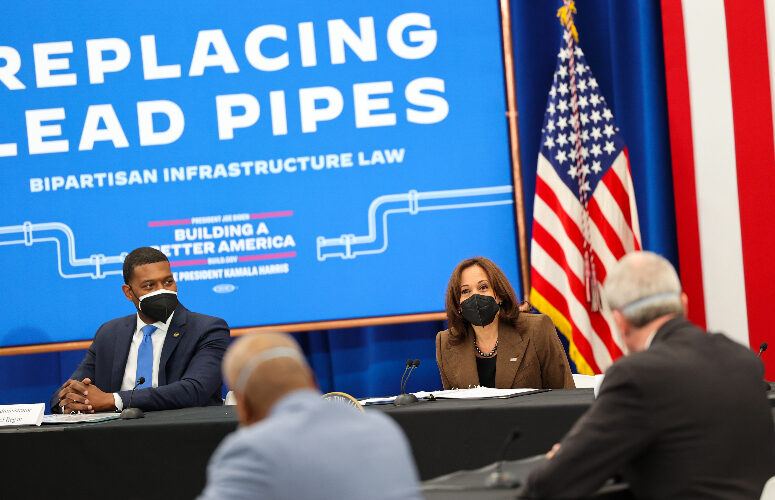 Vice President Kamala Harris made her second official trip to New Jersey this morning, participating in a roundtable discussion in Newark to highlight the work that the city has done in replacing its lead service lines, which provide water to thousands of residents.

According to the Environmental Defense Fund, more than nine million homes across the country still get water through lead pipes. The lead from these pipes contaminates the water that flows through, posing all sorts of health risks to those that use the water.

As part of the bipartisan infrastructure bill that President Joe Biden signed in November, $15 billion was allocated to replace lead pipes across the country. However, according to the American Water Works Association, it could cost more than $60 billion to replace all such pipes.

Harris called the city a role model for how it has handled this removal.

“Newark New Jersey is such an important place in our country for so many reasons – it’s history in terms of its vitality, and contributions to who we are as a nation. We came here at the beginning of this tour to highlight what you have accomplished here in Newark as an example of what cities around our country are capable of doing,” the vice president said. “We know that the work that can be done as a nation in eliminating lead pipes, which are having a profound impact on our children and most vulnerable communities.”

She added that more than half of the children in the country under the age of six are at risk of the negative effects of lead pipes on drinking water.

“It is a public health issue,” she said.

Last summer Gov. Phil Murphy signed a state law requiring every lead service line in the state to be cataloged and removed by the year 2031.

“It has been estimated that there are some 350,000 lead service lines in New Jersey alone. We have already identified at least 185,000 of them, and 1 million service lines remain to be reviewed,” Murphy said.