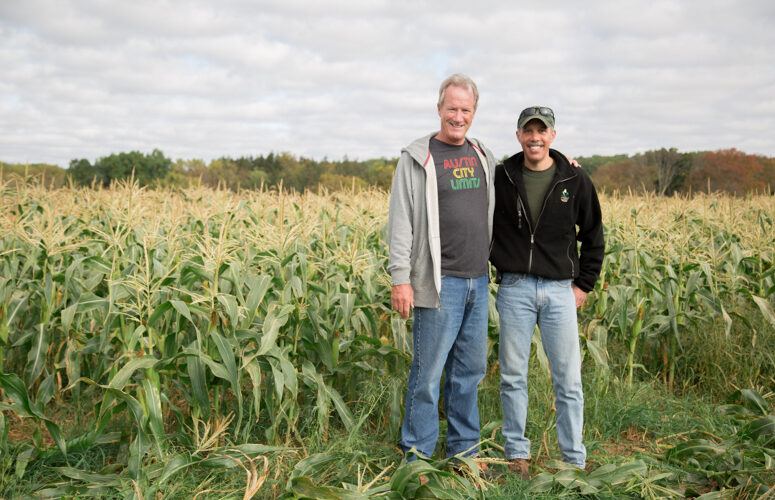 Non-Profit Delivered 9.6 Million Servings of Fresh Produce to Those Faced with Hunger and Food Insecurity During Recent Harvest Season

Unity Bank has launched a partnership program with America’s Grow-A-Row (AGAR), donating $25,000 as the lead sponsor of the Pittstown non-profit organization’s 2022 Farm to Fork Volunteer Sponsorship program, supporting the activities of more than 9,000 volunteers who help to harvest and distribute over 2.4 million pounds of free fresh produce to people in need in nine states. Unity employees also volunteer several times a year at AGAR’s four Hunterdon County farms.

“America’s Grow-A-Row is just an amazing organization that we are honored to support with our resources and time,” said Unity Bank President & CEO James A. Hughes. “As a community bank, Unity strongly believes in being active in the communities where we do business and the experience with America’s Grow-A-Row is extremely rewarding. During their most recent harvest season, the organization’s farms provided 9.6 million servings of free fresh produce to people as far away as Texas! We love being a part of that process.”

AGAR Founder & President Chip Paillex started farming 20 years ago with a modest goal – he wanted to get his four-year-old daughter to eat her vegetables – so he rented a 30 foot by 30 foot plot of land to grow fresh produce. The organization now operates four farms totaling 430 acres in Alexandria, Clinton, Franklin and Union Townships. Ninety percent of AGAR’s harvest is delivered through food bank networks.

“Over the years Unity Bank and its employees volunteered and helped to harvest more than 260,000 pounds of produce for those faced with hunger and food insecurity,” said Paillex. “Unity is really the model corporate citizen because it gives both its funds and time, and that includes everyone from the CEO, Jim Hughes, throughout the bank. We could not be more thankful for the support Unity and its employees give to America’s Grow-A-Row.”

Paillex noted that AGAR’s volunteers are divided equally among community organizations, corporations and schools. The amount of produce AGAR harvests continues to grow every year, allowing the organization to serve more people than ever before. Volunteers pick the farm’s produce and put it directly on trucks that deliver fresh vegetables throughout New Jersey, Pennsylvania, New York, Kentucky, Maryland, Virginia, West Virginia, Connecticut and Texas.

“We have a 16-week picking season and the most recent harvest season allowed us to provide fresh produce daily to about 86,000 people during that time span,” Paillex said. “To put that number in perspective, if those 86,000 people lined-up at our farm it would result in a line 16 miles long, or from here to Pennsylvania, every day of the season. None of it would be possible without our volunteers and funders.”

In addition to providing fresh, healthy produce to those in need, AGAR educates people of all generations about hunger and ways to help; introduces youth to farming and healthy eating; cultivates tomorrow’s leaders in the habit of giving back; and contributes to the sustainability of agriculture. To learn more about AGAR or donate, please visit americasgrowarow.org.