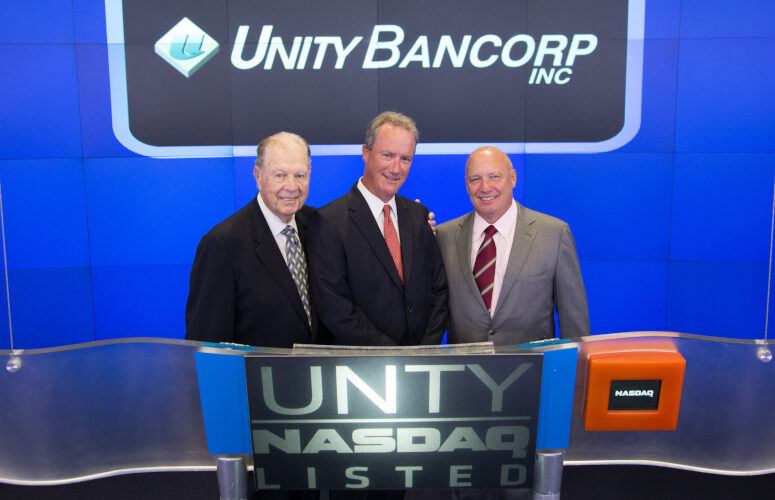 Active in Banking and Real Estate for More than 50 Years, Allen Tucker Served as a Unity Director since 1995

Clinton-based Unity Bancorp, Inc. has announced that Allen Tucker, 95, has retired as vice chairman of its board of directors. He had been a member of the Unity Board since 1995.

“Allen Tucker has been a cherished member of the Unity family for nearly three decades,” said Unity Bank President & CEO James A. Hughes. “Allen’s commitment to the Unity Board, investors, employees, and the community has truly been inspiring. We are forever indebted to Allen for the wisdom and guidance he has provided.”

The founder & chairman of Tucker Enterprises of Clark, Tucker has been active in the real estate and banking communities for more than 50 years. In 2000, Unity Bank created the Allen Tucker Award to honor employees that demonstrate outstanding service to both internal and external customers.

“I have many great memories from my experiences with Unity over the years,” said Tucker, a U.S. Navy Veteran of World War II. “I particularly enjoyed attending the Unity Bank employee holiday party where the Allen Tucker Service Award was presented each year. The naming of the award has always been a very special honor. I have been fortunate to develop many long lasting relationships and friendships with the bank community over the years, which is why I have remained as a Unity director.”

Tucker’s son Aaron, 59, a Unity director since 2014, has succeeded his father as vice chairman of the Unity board. Aaron Tucker is president & CEO of Tucker Enterprises, a diversified, privately held real estate company that has owned, developed, constructed, and managed over one million square feet of industrial, residential, office, and commercial properties along the east coast.

“I feel very proud of where Unity is headed, the bank is like my second home,” said Allen Tucker. “It feels like the right time to pass the torch to the next generation of leaders. The future is bright for Unity. By virtue of the quality and experience of the Board, the maturation of our senior staff and the energy of our talented employees, the bank is well positioned to take advantage of every opportunity that may present itself.”

Unity Bank holds about $2.1 billion in assets and $1.8 billion in deposits.

NJCPA: How Best to Use Coronavirus Stimulus Checks