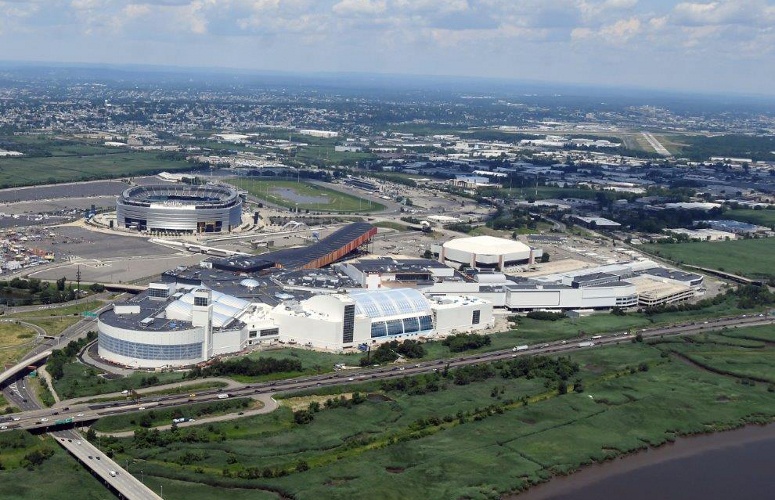 The dust of sanded spackle could not hide the sparkle of the American Dream retail and entertainment complex in East Rutherford during a recent tour of the 3-million-square-foot complex. Developer Triple Five announced earlier this month that the facility would open on Oct. 25. With the ruckus of more than 2,000 construction workers at the site busily plying their trade on a daily basis, it appears that deadline will be met.

Though the facility is still under construction, New Jersey Business magazine saw impressive sights during a tour, including the Nickelodeon Universe Theme Park and DreamWorks Water Park, which alone will consist of 16 fully enclosed acres. According to Dana McHugh, public relations director for American Dream, the water park will house the world’s largest indoor wave pool. That alone will be 1.5 acres and contain 1.5 million gallons of water. The constant temperature in the water park will be 87 degrees, and McHugh adds that people should wear sunscreen at the park (a massive glass ceiling covers the entire area).

On the opposite end of the temperature spectrum is the enclosed Big SNOW Ski and Snowboard Park – North America’s first indoor snow sports center – which will be at a constant 26 degrees Fahrenheit year round, according to McHugh. Right now, this structure is perhaps the most recognizable feature of the American Dream to New Jersey residents, as seen from Route 3 and the NJ Turnpike, since it has been part of the original Xanadu development since 2002. How long it will be a beacon is unknown since an American Dream Observation Wheel – nearly as tall as the Statue of Liberty – will be constructed, and a hotel (a total  of 3,500 rooms planned in phases) is also expected on the site at a future date.

An NHL-sized hockey rink is also under construction. According to McHugh, American Dream is in talks with the National Hockey League concerning the holding of professional sports team events at the rink. There is also: outreach to school teams; thoughts of bringing in figure skating competitions; and of course, public skating sessions. McHugh says the ice rink area can fit 2,400 spectators.

As reported previously by New Jersey Business magazine, 55% of the complex will be retail establishments and 44%  will be entertainment. According to McHugh, 85% of the property has been leased to date.

The complex, when fully open, will employ an estimated 17,000 people. The total number of construction jobs created is more than 23,000.

American Dream will be holding a hiring event on July 24, from 2 pm – 7 pm, and July 25, from 9 am – 1 pm, at Bergen Community College’s Meadowlands Campus at 1280 Wall Street West, Lyndhurst. The jobs are strictly American Dream positions and not for the various retailers. They include positions at the Water Park and Nickelodeon Universe Theme Park, and engineering, maintenance, security, parking and traffic jobs. A full list of openings can be found at jobs.apploi.com/profile/american-dream.

Currently, the Oct. 25 grand opening plans are being finalized. The site is expected to attract 40 million to 50 million visitors per year.