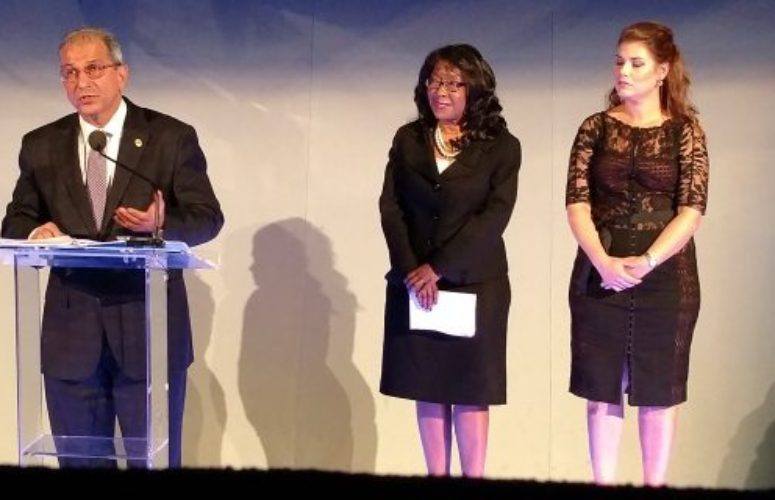 At the podium: Nariman Farvadin, president of Stevens Institute of Technology was named Educator of the Year. To his right are NJ Secretary of Higher Education Rochelle Hendricks and Kim Case, executive director of the R&D Council of NJ.

The entrees are reviewed by some of the state’s top researchers. Nominations are scored based on their significance of problem solving, utility, novelty and commercial impact.

Anthony Cicatiello, president of the Council, told the audience of scientists gathered inside the LSC’s cavernous IMAX Theatre, that “You are helping answer the biggest questions of our time. We see our future in you, and we realize that the future is bright.”

Paying tribute to New Jersey inventor Thomas Edison, Troy C. Sarich, Council chairman and vice president of real world evidence at Janssen, said that the state’s research community was developed on the shoulders of Edison. “His [research] diversity led to several industries, many of which are operating here.

Marcus Weldon, president of Bell Labs and corporation chief technology officer at Nokia, received the Science & Technology medal. With a career that spans 20 years at Bell Labs, he told the audience that the institution helps “solve the world’s problems” and “enables new realities.”

He told New Jersey business that Bells Labs has recently hired between 70 and 75 employees in the state these past three years. “While Silicon Valley gets a lot of press coverage, the top talent is still at Bell Labs and in New Jersey,” he said.  “We have the existing talent that is being augmented with new talent (new hires). That means experience and knowledge with new vision. … That is the magic of Bell Labs.”

Caren Franzini received the Chairman’s Award for her role as former CEO of the New Jersey Economic Development Authority in which she developed countless public and private sector partnerships, policies and economic growth incentives that supported the advancement of New Jersey’s STEM economy.  Caren has worked for several governors and has for more than two decades been universally respected by public officials across our state.

Stevens Institute of Technology President Nariman Farvardin was honored as Educator of the Year.  During President Farvardin’s tenure, Stevens, the Innovation University™, has won the title at the national Solar Decathlon, has consistently been ranked by U.S. News & World Report as one of the nation’s top institutions, and has held the No. 3 rank for its return on investment under the PayScale reporting.