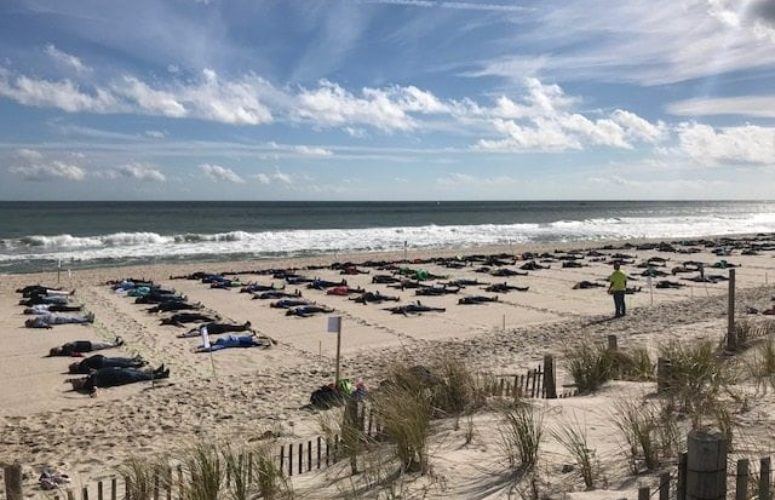 On Oct. 28, participants of OceanFirst Bank’s fundraiser Sandy Angels stood in groups of fifty that spanned the length of almost a mile. Each participant was carefully instructed on how to create their sand angel in order to meet the Guinness World Record requirements.

One thousand six hundred and nine people stood on a windy, but warm, sunny beach in Seaside Park in hopes to break the Guinness World Record for simultaneous sand angels. The official number is yet to be validated by Guinness, but it well surpassed the current record of 1,387 in Ludington, Michigan.

Over $30,000 was raised in support of the people and businesses still affected by Superstorm Sandy and the recent hurricanes.

“As New Jersey’s leading community bank, OceanFirst was proud to play a major role in helping our neighbors and local businesses get back on their feet following Superstorm Sandy in October of 2012,” said Christopher D. Maher, Chairman & CEO of OceanFirst Bank. “Five years later, there are still people and businesses working to fully recover from the devastation caused by Sandy. We thought this would be a fun event and great way to pull the region together to help raise money for those affected by Superstorm Sandy and the recent hurricanes.

“We appreciate the support we’ve received to date from the community and our sponsorship partners, New Jersey Natural Gas, Townsquare Media and Causeway,” Maher continued. “We look forward to shattering the Guinness World Record for Sand Angels, and raising much needed funds for these worthwhile organizations and the people and businesses they support.”