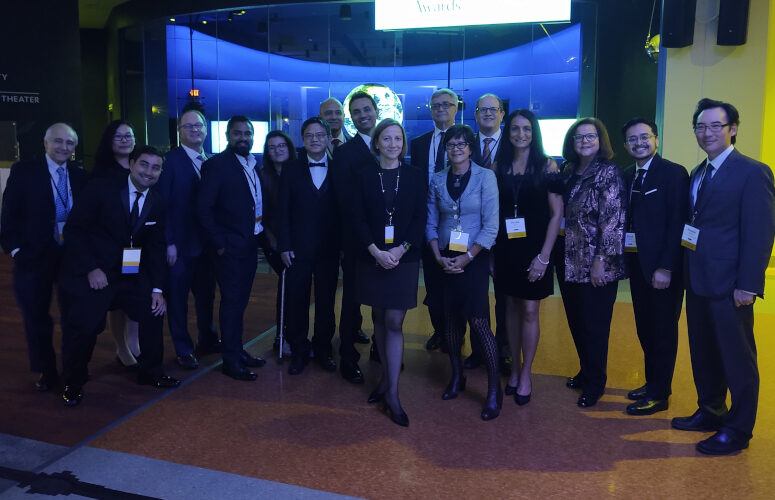 The Night When NJ Scientists Are Stars!

Held at the Liberty Science Center in Jersey City, the 43rd annual event was a night in which “the scientists are the stars, where the dreams of research concepts become reality, and where the state of New Jersey gets to shine a light on its title as the Innovation State,” said R&D Council President Anthony S. Cicatiello.

Before an audience of more than 200 people, mostly research scientists from academic institutions and businesses, Cicatiello added, “Everyone in this room knows what it takes to make a difference in the world. You know about the education that is needed; the failure, perseverance and success; and the blood, sweat and tears. … It is the determination of people in this room that makes a difference.”

R&D Council Chairman Kevin Campos, who is also vice president and head of process, research & development at Merck, told the audience, “Similar to Thomas Edison, you defied the status quo. You chose to imagine what might be possible, turning your ideas into reality.”

Kim Case, executive director of the R&D Council, recognized the Governor’s STEM Scholars at the event. The STEM Scholars program is a partnership between the Governor’s Office, the Department of Education, the Office of the Secretary of Higher Education, and the R&D Council. Through the program, “excelling high school and college students from grades 10 through PhDs are learning about how they can become STEM leaders at New Jersey companies, within our universities and within government,” Case said.

David W.C. MacMillan, Ph.D. received the Science & Technology Medal for the development of asymmetric organocatalysis – a new type of catalyst that is greener than traditional metal catalyst. This innovation has transformed organic chemistry, leading the world to a new means of constructing drugs and materials. Dr. MacMillan, the James S. McDonnell Distinguished University Professor of Chemistry at Princeton University received the Nobel Prize in Chemistry in 2021 for this work.

New Jersey Department of Health Commissioner Judith M. Persichilli, R.N., B.S.N., M.A. received the Chairman’s Award for her tireless efforts leading the state’s public health emergency response during the COVID-19 pandemic, culminating in the distribution and administration of more than 14 million­­–and counting–doses of COVID-19 vaccines in the state.

The Educator of the Year Award was presented to New Jersey Senate Majority Leader Teresa Ruiz (District 29). Prior to becoming Majority Leader in 2022, Senator Ruiz served as the Chair of the Senate Education Committee for 12 years where she fought for equity in education spaces. Senator Ruiz has been the leading force on increasing access to early childhood education with the expansion of state-funded Pre-K in New Jersey. She has championed apprenticeship programs to support career pathways in high-growth industries and sponsored legislation to increase teacher diversity.