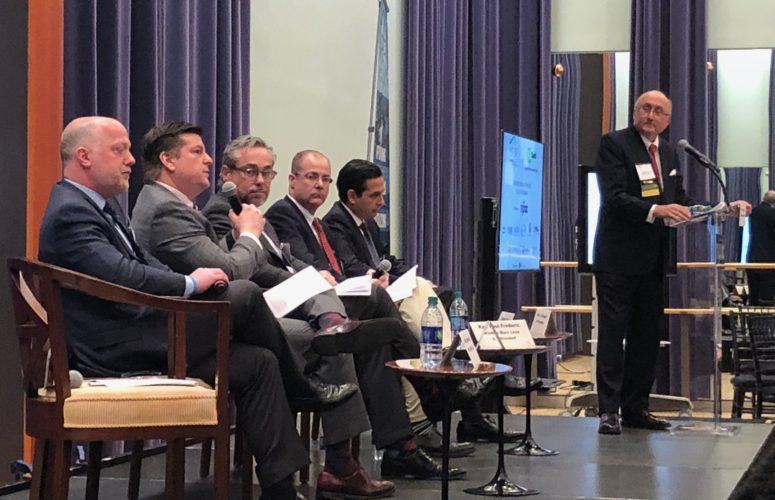 The Future Remains Bright for Redevelopment in Newark

While Newark did not become home to Amazon’s new headquarters, the city’s consideration and selection for the Seattle-based tech giant’s HQ2 top 20 list is still notable.

“Despite the ‘loss,’ there is a tremendous silver lining considering the efforts of everyone in this room and everyone directly involved in the process,” said Peter Bronsnick, executive vice president of SJP Properties, today at Newark Regional Business Partnership’s (NRBP) Real Estate Market Forecast, held at the New Jersey Performing Arts Center (NJPAC).

The collaboration and efforts that got Newark to be seriously considered for Amazon’s headquarters have been – and will continue to – play a vital role in the continued transformation of the city, but there are also existing physical assets the city possesses that make it an attractive place to live, work and play.

John Saraceno, co-founder and managing principal of Onyx Equities, pointed to the accessibility of mass transit, the conglomerate of large corporate headquarters including Panasonic, Audible, PSE&G, Prudential and soon Mars Wrigley, as well as the cultural centers the city possesses such as the Prudential Center and NJPAC as critical pieces that highlight Newark’s continued renaissance.

“The idea that [Newark] is their location is profound,” Saraceno said. “We do work in four states, and there is no place I am more bullish on right now than Newark.”

One of Onyx’s largest projects in Newark specifically is its joint venture acquisition this past January of One, Two and Four Gateway Center – the largest transit hub office complex in the state. It’s just one example of numerous real estate acquisitions in the city over the past year, but the 1.6-million-square-foot transaction is significant.

The hope is to reinvent the concourse as a destination, and spur significant demand from retailers and corporate office users who prioritize access to transit and a talented, diverse workforce.

“Our vision for Gateway Center is to take the concourse and look at it vertically, as though it were its own building,” said Saraceno. “[We want] to take that, along with the retail space at the base of the building, and program it to create a retail pedestrian experience.”

Another unique asset Newark possesses is its technological prowess, highlighted not only by Audible’s presence, but also the city’s significant broadband capacity. As the state continues to focus on fostering a 21st century innovation economy, Newark plays a vital role.

“If we continue to promote our educational institutions, we are going to see the life sciences trend manifest itself and continue to grow,” Bronsnick said. “Newark is a destination for life science use because of the availabilities and the transformation that’s taking place within the assets, but also because of its accessibility and highly skilled workforce.”

Of course, Newark still has its challenges, notably the continually deteriorating conditions of Newark Penn Station, which quite literally serves as the “gateway” into the city.

“A world class train station will go a long way in attracting new businesses and residents,” said Richard Dunn, senior vice president of Paramount Assets LLC. “I was just in Washington D.C., and Union Station is absolutely incredible. If we had something like Union Station here in Newark I think that would open the door for a lot more possibilities for the city.”

“There are a lot of priorities, but I really think [fixing Penn Station] needs to become priority No. 1,” added Bronsnick. “Quite candidly, everything else is a waste of time unless we address it.”

Prologis to Acquire Liberty Property Trust for $12.6B