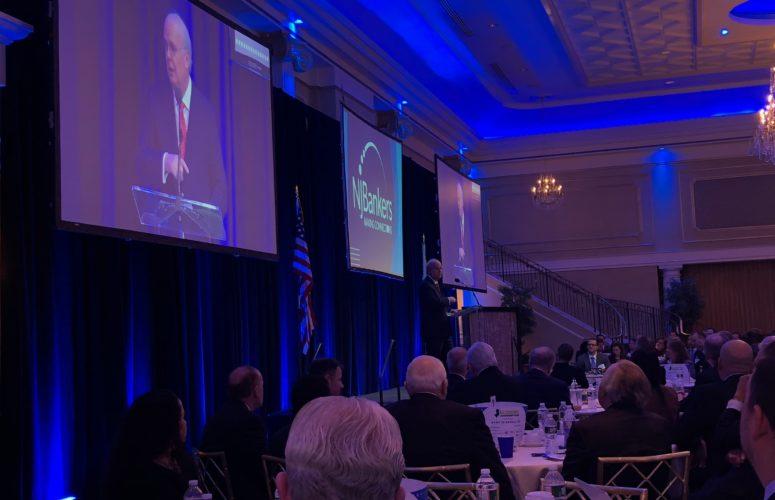 How are Banks Tackling Top Issues in the New Year?

The event saw hundreds of bankers in attendance who represented institutions of all sizes spanning the state. They were given the opportunity to hear from key thinkers and influencers on current issues that shape New Jersey and the impact that they are having on banking, as well as an economic outlook for the new year.

Patrick Harker, president and CEO of the Federal Reserve Bank of Philadelphia, spoke on the state of the economy, which he described as “pretty good.”

“A lot of phrases that I used to describe the economy back in 2017 still apply today,” Harker said. “That’s positive news and pretty amazing when you consider how much the world has changed since then.”

Harker explained that business investment is lacking, in part due to uncertainty in fiscal and other legislative policies. However, a very strong labor market has enabled consumer confidence to remain very strong, much to the benefit of the economy overall.

“With consumer spending making up some 70% of the US economy, that makes it the ‘hero’ in our growth story,” Harker said.

“I’m a lifelong South Jerseyan, and I’m happy to say that I actually think [New Jersey] is in pretty good shape,” he said.

Jelena McWilliams, chair of the Federal Deposit Insurance Corporation (FDIC), addressed a number of issues that directly impact the banking industry, as well as her role at the FDIC.

“I realized when I came to the FDIC that we do a lot of things that frankly people don’t know about, and there’s no reason for them not to know,” said McWilliams, adding that more transparency is a key initiative for the corporation. “This is part of a culture change that we are trying to implement at the FDIC. I think some regulatory agencies are too comfortable with doing things the way they have always been done.”

She pointed to various regulations and highlighted the Community Reinvestment Act (CRA) as one example of a regulation that needs to be modernized.

“The way banks take deposits has changed over the years, and [the CRA] uses a framework that was last revised in 1995,” McWilliams said. She said that the CRA needs a modernized framework that accommodates for all of the technological advancements that have happened since its last revision.

Marijuana is still considered illegal on a federal level, however it is legal in many states and soon could be in New Jersey. Unfortunately, due to its status as a banned substance, financial institutions are in a tough spot if they choose to do business with a marijuana related company.

McWilliams said that while a bank won’t get a blessing from a federal regulator that says “go ahead and do business with a marijuana manufacturer or distributor,” regulators do understand the predicament that banks are in, and they are trying to work within the existing framework until there are federal changes.

“To the extent that you are [doing business with marijuana companies] there is a Financial Crimes Enforcement Network (FinCEN) guidance that you should follow to a tee,” she said.

Invest in the Future

Ultimately, any peek into the future begins and ends with the unknown. Technology is a driver of the unknown, and it is imperative that banks stay on the cutting edge of innovation in order to have success long term.

“I encourage banks to team up with tech companies and to develop innovation internally,” McWilliams said. “Especially if you are a small bank, it’s vital to invest in technology. Your customers expect it and you will not survive long term if you don’t advance technologically.”