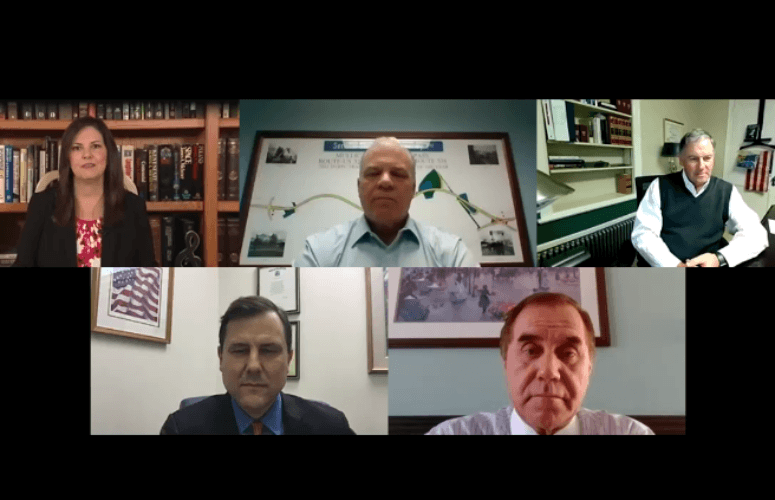 No matter how many questions four of the state’s top legislative leaders were asked during a panel discussion at the New Jersey Business & Industry Association’s virtual Public Policy Forum today, their responses typically included the phrase: We need to get people back to work!

This is understandable at a time when just over 1.8 million New Jerseyans, a third of the state’s workforce, have filed unemployment claims since mid-March, the beginning of the COVID-19 pandemic.

Work on the package – one proposed in the fall of 2018 by Gov. Phil Murphy, which would, among other things, cap tax breaks to corporations, and one later introduced in the Senate, which would not include caps – has slowed during the pandemic.

According to Coughlin, “The conversation slipped a bit, but it never stopped.” He said that his staff and Senator Sweeney’s are now “right back” working on the package.

“We need a tax incentives program and we need it now,” Bramnick interjected. He said that New Jersey always ranks last in various surveys as a place to do business, so “you must give the business community a reason to come here. They are not coming here because of [New Jersey’s] business environment. That’s why we need tax incentives more than most other states. … It does not need to be perfect, but it has to be done so businesses know that New Jersey is competitive and that we want businesses here and that we are willing to pay for it.”

Because businesses have found themselves in the middle of an economic crisis “through no fault of their own,” Bramnick said there also needs to be a package of bills that waives taxes owed because of pandemic-related hardships.

Additionally, Coughlin and Sweeney stressed the importance of infrastructure investment.

“We are going to need a lot of stimulus – and I mean infrastructure – to get things moving,” Sweeney said. “We need to get the Hudson/Bergen and Gloucester/Camden light rail projects going. … We need to create jobs.”

Infrastructure investment “has to be part of the recovery process,” Coughlin added. “It means good paying jobs and people getting back to work.”

What is also needed to get businesses up and running is the remaining CARES Act money that has to be spent by the end of the year. This past October, the New Jersey State Auditor issued a report revealing that only 10% of the $2.4 billion total had been dispersed as of Sept. 30.

Senator Kean said his caucus is calling for an emergency session of the Legislature to “push that money out. We can do it on a bipartisan basis and make sure people are protected in our economy.”

Sweeney said he reached out to the governor’s office after reading the auditor’s report, and was told the money has been committed.

He added, “Right now, we have to find out if [the money] is really sitting around. We are not talking about taking surplus money, we are talking about CARES Act funding.”

Bramnick added, “Did anyone ask the governor what the money is committed for? Do we live in a country where things are not transparent?”

He also said the governor should have direct conversations with small businesses that are about to fail. “I have asked the governor to hold hearings. Let these businesses talk to him directly. Let them tell him their ideas,” he said.

“I know the governor speaks with his experts – he speaks to doctors – but he should speak with everyone,” Bramnick continued. “It is frustrating for someone who owns a bar or restaurant not to be able to talk to anyone high up in the administration. That’s not saying his decisions are wrong, but you need an open discussion with people other than [issuing] executive orders.”

Asked by moderator Rhonda Schaffler, business correspondent for NJ Spotlight News, if business tax increases can be expected every year moving forward, Coughlin replied, “The answer to that is that we never look to raise taxes.

“It has been documented that the senate president and I have stood our ground on taxes many times. This year, we extended the Corporate Business Tax (surcharge), which was about to expire, because we tried to come up with a balanced approach to get us through this extraordinarily unusual time. So, I supported it. It’s not permanent. It will expire in four years, and I hope we will be in a good place by then.”

All legislators agreed that more stimulus money is needed from Washington, D.C.

Sweeney said he is hopeful that President-Elect Joe Biden will have a good relationship with the Republican leadership in the US Senate because he has served there for many years and has established relationships. “I think politics are going to be pushed aside a little bit because we all know that we need to do something to help the states,” he said.

Please click here for the complete video of the panel discussion.