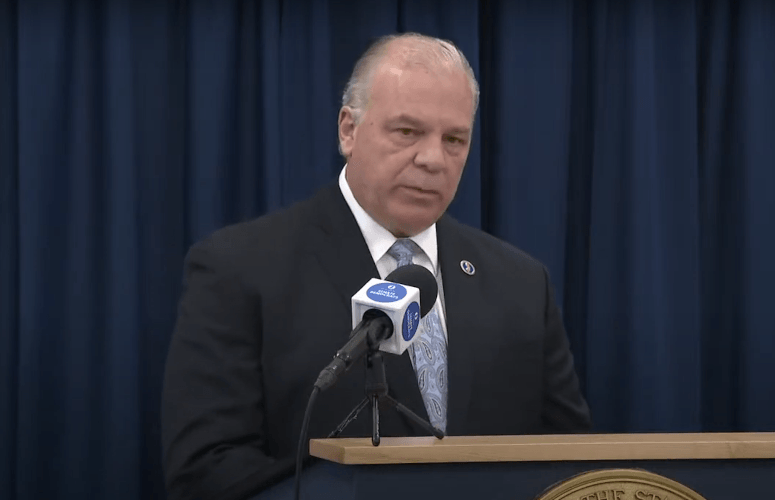 Sweeney Concedes, Will Remain a ‘Strong Voice for Unity and Opportunity’

At the State House today, Senate President Stephen Sweeney conceded defeat to Republican challenger Edward Durr, a virtually unknown candidate who was leading Sweeney by 2,212 votes as of this morning.

Striking a somber tone, Sweeney said, “All votes have been counted fairly and I accept the results.”

He congratulated Durr, wishing him the best of luck, adding, “The people of the 3rd Legislative District are the best in New Jersey. It has been an honor and a privilege to represent them in the State Senate and to serve as the President of the State Senate. I have had the opportunity to work with extraordinary people and I am proud of what we have been able to accomplish for our district, for South Jersey and for the state.”

As the longest serving Senate President in state history, Sweeney ran off a list of accomplishments he achieved, all in the effort, he said, to make New Jersey a more affordable state for individuals, married couples, and retirees. Some of those he mentioned included: enacting a $15 minimum wage, providing workers with paid family leave and earned sick leave, legalizing marijuana, making South Jersey “the center of the nation’s offshore wind industry,” saving three nuclear power plants, saving Atlantic City from the brink of bankruptcy, protecting prevailing wage, stabilizing the state’s pension system, and saving billions of dollars in healthcare and prescription costs.

“Looking at these accomplishments from a distance this past week, you can see the outline of what has always motivated me,” he said. “I have never seen government do everything right, but I believe it must do the important things right.”

He said the election result was due to a “red wave,” with some 12,000 more people voting this time compared to 2017 in his district.

“What voters said in this election is that New Jersey is a state filled with hardworking people who want to provide for their families. As leaders, we need to speak directly to the concerns of all voters,” Sweeney said.

He said he plans to keep speaking to those concerns, saying he will remain fully involved in the public affairs of the state.

“I will keep speaking out for fiscal responsibility and reform. I will be a strong voice for unity and economic opportunity and for competitiveness and growth. [I will be] a champion of policies that make New Jersey affordable so that young people can live here, young couples can buy homes, working families can make ends meet with enough left over to go on a vacation, and retirees can be able to remain in their houses [and stay] near their loved ones,” he said.

When asked if he plans on running for office again, Sweeney commented, “I don’t say what I am doing, but I have been a believer in making New Jersey affordable for a long time. … The greatest news of all is that this is great state, and it is fixable. … Let’s make it an affordable one.”