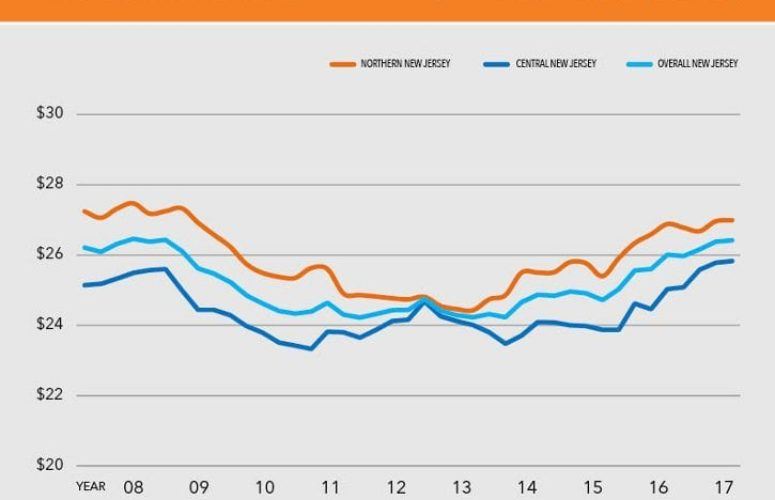 Small- and mid-size tenants are eschewing the downtown markets in favor of lower rents in the suburbs, where property owners have invested significant capital to redevelop and modernize buildings to meet the standards of today’s tenant.

With downtown and suburban submarkets flourishing, New Jersey’s office vacancy rate improved slightly during the second quarter, from 15.1 percent to 15 percent. During the past 12 months, more than 2.7 million square feet of space has been absorbed, marking the second-highest year-over-year total since 2006

“The quality of New Jersey’s suburban office stock has dramatically improved, and property owners are now reaping the benefits of their repositioning initiatives,” said Matt McDonough, Managing Director at Transwestern. “Although the younger population wants to live downtown, many employers remain inclined to choose a location that suits its existing employee base, which means finding suitable space in the suburbs.”

The largest lease of the second quarter was a renewal signed in central New Jersey, as AT&T agreed to remain in Piscataway.  The largest new lease occurred in Newark, where Newark Public Schools committed to a relocation within the city that is anticipated to save taxpayers approximately $2 million per year.

“Second-quarter leasing velocity in New Jersey outpaced the first quarter, with new deals making up two-thirds of the transactions,” said Matthew Dolly, Transwestern’s New Jersey Research Director. “Much of the success can be attributed to the market’s diversity, which is its greatest strength. The reimagined and modernized office product is making for a tremendous draw, and the large variety of industries active in the state plays a significant role in the heightened leasing activity.”

Additional highlights of the report include: