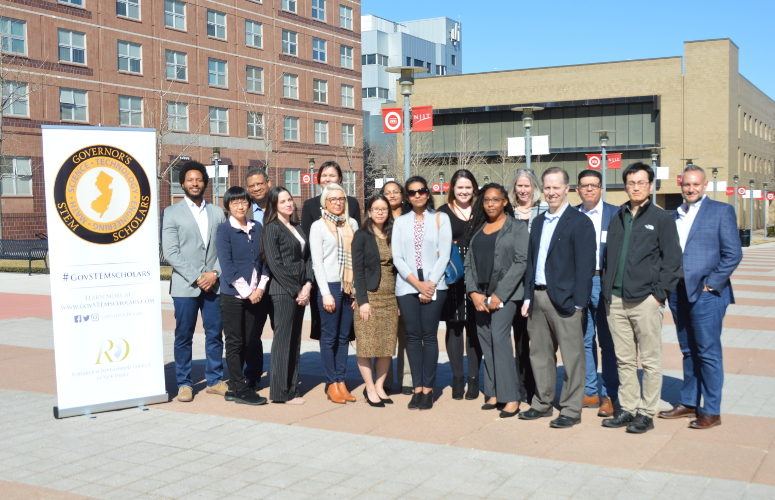 The Symposium took place in the Campus Center Atrium for the first time to allow for more space, as the program boasts 22% program growth over last year’s class. After a breakfast provided by NJIT, Dr. Rebecca Lubot, the director, welcomed the scholars. Because the program is a public-private partnership among the Governor’s office, Department of Education, Office of the Secretary of Higher Education, the Research & Development Council of New Jersey, and private companies, and these, therefore, are the Governor’s STEM Scholars, she referred to Gov. Phil Murphy’s oft-repeated statement that “New Jersey was the Silicon Valley before there was a Silicon Valley,” and highlighted some of New Jersey’s many attributes. She introduced NJIT President Dr. Joel Bloom who followed the same theme. He discussed STEM innovations and opportunities available at NJIT and across the State, pointing out that these are strong reasons for N.J.’s best and brightest to remain in New Jersey as they pursue their careers.

An important part of the Governor’s STEM Scholars’ mission is to increase diversity, inclusion, and women in STEM. To that end, both the main speaker and workshop leader were women: director of the global Re-Ignite Program at Johnson & Johnson Elizabeth Markus’s talk was followed by Natasha Velikoselskiy’s workshop: “Grow Your Impact Through Authentic Value Proposition.” Markus explained that many jobs are advertised on LinkedIn and Twitter and explained what belongs in a LinkedIn profile. She also helped the scholars think through their preparation for job interviews. She emphasized the importance of developing one’s own brand and advocating for oneself. In the workshop, new to this year’s event, Velikoselskiy, an independent certified executive coach and a development leadership strategist, shared the knowledge she usually conveys to C-level executives with the scholars. She coached the scholars, and they coached one another, to answer the “So what?” question: why their research matters to the field, and even to the State.

“It was a pleasure to see the number of women in the room, and these bright scholars from across the State of New Jersey interacting during the workshop. By the end of the day, they were able to discuss not only what they hoped the conclusion of their research project would be, but why such a conclusion would be marketable and valuable to an institution or future employer,” said Velikoselskiy, a firm believer in authentic, values-based leadership in organizations and a committed diversity and inclusion advocate.

The scholars then took a break for an NJIT-provided lunch, and, with the food for thought from Markus’ talk and Velikoselskiy’s workshop, began the speed-networking session feeling empowered. The speed-networking session is perhaps the favorite event of the year. During this event, scholars rotated in teams from thought leader to thought leader practicing their new value propositions and taking the opportunity to ask whatever STEM-related questions were on their minds. The topics ranged from questions regarding the thought leader’s individual STEM career path to the availability of internships at his or her company. In addition to the key connections that were made, scholars took away a better understanding of how their work connected to other STEM disciplines.

Volha Tryputsen, a principle statistician at Janssen Pharmaceutical Companies of Johnson & Johnson, who returned for a second year in a row to network with the scholars, stated “I am impressed by the intelligence of these scholars. This is a much-needed program that will help ensure that companies, such as my company, have the talent needed for future innovations.”

After the speed-networking concluded, one of the Governor’s STEM Scholars sponsors, Hackensack Meridian Health, represented by Corporate Director of Life Sciences and Innovation Albert Baker, surprised the scholars by generously gifting each of them new HP tablets.

After Albert Baker’s disclosed the surprise, scholars and industry representatives toured NJIT’s Makerspace. Tours were led by Raymond Vaccari, Assistant Director, Employer Relations, Career Development Services, NJIT. The NJIT Makerspace – the largest of its kind in New Jersey at 10,000 square-feet – is a staff- and community- operated workspace where students, faculty and staff with common interests in engineering, technology, computing, science, machining, and digital or electronic art, can meet, socialize, collaborate, design, build, prototype, and test. Scholars then dedicated time to their team research projects, and the Symposium concluded.

Governor’s STEM Scholar Trang Vu, a biomedical engineering Ph.D. Candidate at Rowan University, said, “The whole day was a great learning experience. I found the symposium extremely well-organized and helpful. I am grateful to Dr. Lubot and the Governor’s STEM Scholars for giving us the opportunity to share great conversations with these thought leaders.”

Upcoming events for the Governor’s STEM Scholars include: a STEM Showcase at the State House in Trenton; a visit to PSEG’s Sewaren Power Plant; and a commencement symposium when the scholars will present their work and compete for both “best research project” and “STEM civics” awards.