New Jersey Attorney General Gurbir S. Grewal is leaving his post as the first state Sikh Attorney General in the country to become director of the Division of Enforcement at the Securities and Exchange Commission (SEC), effective July 26. 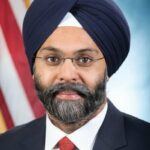 In an issued statement, Gov. Phil Murphy said, “Through his efforts standing up to the Trump administration’s attacks on New Jersey and our diverse communities, instituting historic reforms in policing, and leading the fight against gun violence, Attorney General Grewal has been an invaluable member of our administration and a dedicated public servant to the residents of New Jersey. Though we’ll miss his leadership, I know he’s the right person to protect investors all across the nation, and I congratulate SEC Chair Gensler for this outstanding selection.”

“I’m honored and delighted to welcome Attorney General Grewal to the SEC,” said SEC Chair Gary Gensler. “He has had a distinguished career as New Jersey’s chief law enforcement officer and as a prosecutor at both the local and federal levels. He has the ideal combination of experience, values, and leadership ability to helm the Enforcement Division at this critical time. I look forward to working closely with him to protect investors and root out wrongdoing in our markets.”

“The Enforcement Division has a critical role to play in finding and punishing violations of the law,” Grewal commented. “I’m excited to get to work with the talented team of public servants to uncover and prosecute misconduct and protect investors. I thank Governor Murphy for the opportunity to serve the people of New Jersey and all of the colleagues with whom I’ve had the pleasure to work during my career in the state.”

Grewal has served as the state’s 61st attorney general since January 2018, when he was confirmed by the New Jersey State Senate after being nominated by Murphy. As attorney general, he heads the Department of Law & Public Safety, which employs more than 3,700 uniformed officers, 750 lawyers, and thousands of additional public servants, including investigators, regulators, and administrative staff.