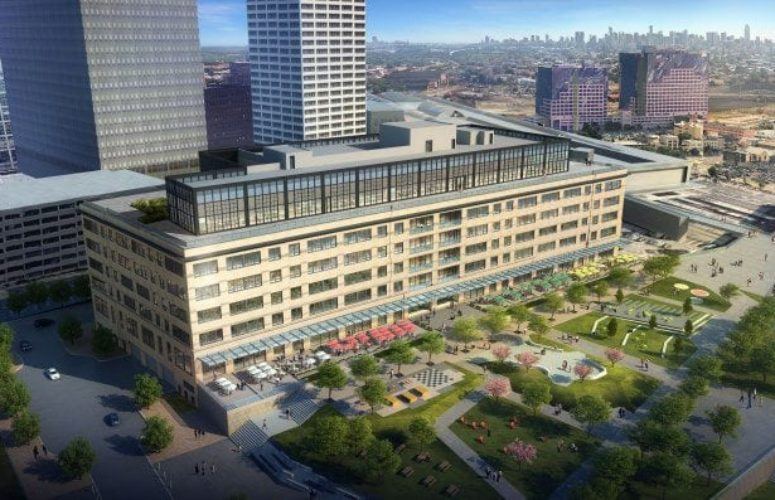 An aerial rendering of Ironside Newark.

It is perhaps difficult to determine the precise inflection point for a city’s revitalization, and, in the case of Newark, it might only be said that its rebirth is in full swing and – by nearly all accounts – growing, with major new economic developments announced on an almost-routine basis. For example, the ribbon-cutting for the reimagined Hahne’s & Co. department store building at 609 Broad Street, a landmark which had been vacant for decades, occurred less than five months ago. That site will now feature an arts and cultural center operated by Rutgers University, in addition to thousands of square feet of abutting retail space, including the upscale grocery store Whole Foods and bookseller Barnes & Noble College (the latter will become Rutgers-Newark bookstore, open to the community). The mixed-use development also includes 160 new luxury apartments (modern stainless steel appliances, solid wood floors, high ceilings).

And now on McCarter Highway (Route 21), the start of construction for Ironside Newark has occurred, in effect taking a more than 450,000-square-foot, seven-story former warehouse (http://www.ironsidenewark.com/), and fitting it with a “two-story atrium” and “loft-style office spaces,” replete with a ground-floor retail component and high-speed fiber optics. The site abuts part of Mulberry Commons Park, and is approximately four blocks from the New Jersey Performing Arts Center (it is also close to the law firm of Gibbons, P.C., and the law firm of McCarter & English). Mass transit is facilitated by Newark Penn Station, which is essentially across the street.

Ironside Newark is being developed by Edison Properties and the City of Newark, and is slated for occupancy by fall of 2018.

“Mulberry Commons will serve as a catalyst for Newark’s continued transformation into a dynamic, walkable community, and Ironside Newark is an important component of activating this critical section of our downtown,” said Baraka. “The redevelopment of this building from a vacant warehouse into a cutting-edge commercial and retail destination, equipped with high-speed internet via our network of dark fiber optic cable, is a testament to the progress occurring throughout downtown and beyond. By attracting 21st century jobs and businesses to the area, Ironside Newark and Edison Properties are helping push Newark forward on its path to becoming a 24/7 city.”

Editor’s Note: An upcoming, in-depth feature article in NEW JERSEY BUSINESS magazine will explore what businesses and higher education institutions are doing to improve the lives of Newark city residents.  An assortment of efforts in Newark aim to help ensure that “a rising tide lifts all boats,” and interviews with various leaders will showcase this overall scenario. This article will also detail the tremendous progress the city of Newark has made in myriad ways, as we mark the 50th anniversary of the 1967 Newark rebellion this year.