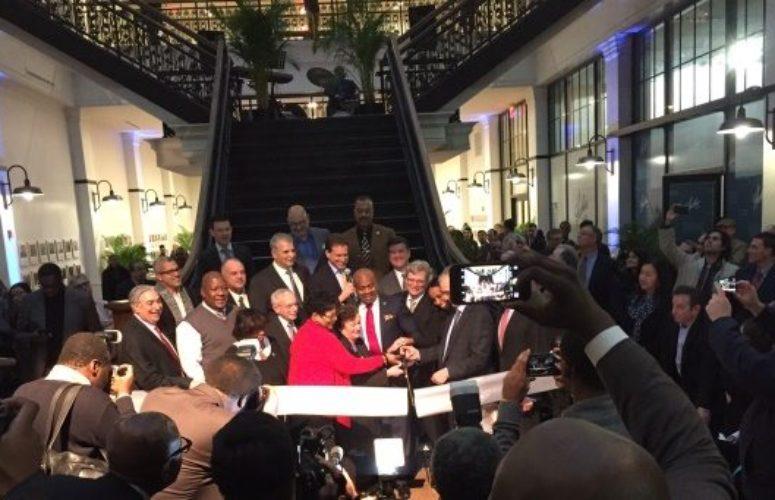 A major milestone in the City of Newark’s ongoing revitalization occurred yesterday afternoon with the ribbon-cutting for the reimagined Hahne’s & Co. department store building at 609 Broad Street, a landmark which had been vacant for decades.  The site will now feature an arts and cultural center operated by Rutgers University, in addition to thousands of square feet of abutting retail space, including the upscale grocery store Whole Foods and bookseller Barnes & Noble College (the latter will become Rutgers-Newark bookstore, open to the community).

The mixed-use development also features 160 new luxury apartments (modern stainless steel appliances, solid wood floors, high ceilings), with 64 of them dedicated to low-income and working families. Some of these apartments are located on the third and fourth floors of the Hahne’s building, while others are in a building which connects to Hahne’s via a magnificent atrium and lobby.

An array of key speakers addressed yesterday’s enthusiastic crowd, with some of them remembering the site as it once was when Hahne’s department store was operational (it shuttered in the late 1980s).

Overall, the massive $174-million redevelopment stemmed from collaboration between numerous partners including, but not limited to: Prudential Financial, Inc., L+M Development Partners, The Goldman Sachs Group, Citi Community Capital, the New Jersey Economic Development Authority, New Jersey Housing and Mortgage Finance Agency and a long list of individuals at many levels of government.

Newark Mayor Ras Baraka told the audience, “I just want to say thank you to everybody. This is the first time we get to have the kind of public-private partnership of this magnitude, in the City of Newark. It is going to change the footprint of the city, completely and totally.”

John R. Strangfeld, chairman, CEO and president of Prudential Financial, said, “[This development] joins other new and long-term partners that are bringing energy and vitality to the neighborhood, and we are just getting going – there is a whole lot more from where this came from.”

Senator Cory Booker, for his part, said, “There was a mayor, I think Mayor Gibson, who famously said, ‘Wherever America’s cities are going, Newark will get there, first.’  This is a project that demonstrated that is true.”

In 1994, the site was placed on the National Register of Historic places, and the redevelopment accordingly preserves the department store’s signage and skylight, among other components.

Ommeed Sathe, head of impact investment, and vice president at Prudential Financial, told NEW JERSEY BUSINESS magazine, “There has always been some incredible stuff going on in Newark; it has always been the state’s largest city.  We have the performing arts center and the Prudential Center, and Prudential has been here 140 years. There have always been strengths.

“What has changed now is that to some extent, a lot of the great partners that were here, already, are working together in a much more intentional and collaborative way. The Hahne’s building is the result of that.  This couldn’t happen without Prudential, but it couldn’t have happened without Rutgers, or our private sector partners, or the city. That energy, that sort of collaborative leadership, is so core to what is happening, now.”