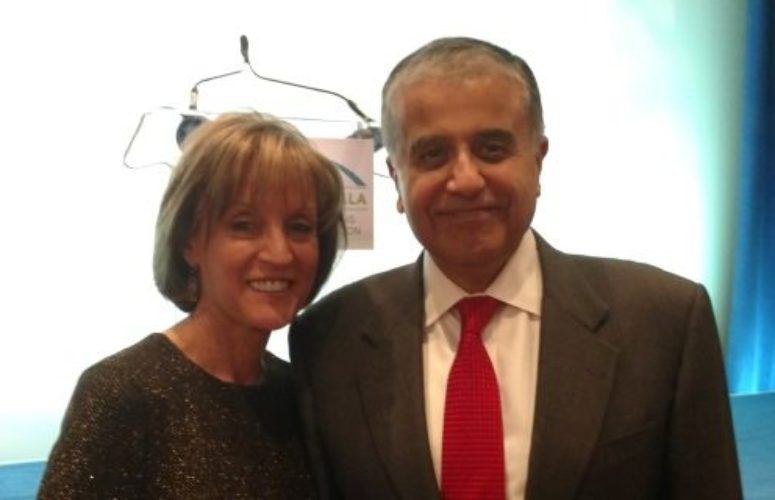 BioNJ’s annual event featured an array of speakers and award winners in the life sciences sphere.

In what has become one of the top New Jersey life sciences events, the trade organization BioNJ last night held its 24th annual dinner meeting, networking event and innovation celebration at the Hilton East Brunswick, with some 650 people in attendance.  Rousing speeches by the likes of life sciences icon Fred Hassan, and, separately, journalist extraordinaire Joan Lunden, underscored the order-of-magnitude progress being made in the life sciences arena.

Hassan, who received the Dr. Sol J. Barer Award for Vision, Innovation and Leadership, is now partner and managing director at Warburg Pincus and had been chairman and CEO at Schering-Plough, among other notable roles in his career.

He added, “But, I do believe that in this century, we will crack that biology nut.  And as this biology nut cracks, our lives will be hugely changed.  Just like the previous two centuries changed mankind’s lives forever, in this life sciences century, our ability to live better and live longer, will be vastly improved.

“Never before is biological knowledge, genetic knowledge and data science advancing at such a fast pace.  We are seeing as much knowledge gained in the last two years, as we have seen in the entire history of mankind. Big pharma is 75 years old, and biotech is 35 years old.  In this century, both industries will accelerate their reinvention. They will converge; biopharma will be big pharma, and big pharma will be biopharma. In fact, everything will be either big biopharma or small biopharma.”

Hassan additionally prognosticated that thousands of small life sciences companies, many of them in New Jersey, will continue to play important roles in the “creativity-driven” industry.  Hassan further stated that talented people from around the globe want to come to the Garden State, and that the state is the “center of gravity of the global pharmaceutical industry.”

Meanwhile, keynote speaker Joan Lunden, a household name for many decades via Good Morning America, discussed how, in 2014, she was diagnosed with Triple-Negative Breast Cancer – and she gave the audience a riveting accounting of her experiences with chemotherapy, surgery and radiation. Perhaps most importantly, she offered a range of support and advice for the audience.

In a joint statement, Hart and outgoing chairman Stuart Peltz, PhD. (CEO of PTC Therapeutics, Inc.), said, “Tonight we recognize Patients and industry leaders who have reached significant milestones as well as companies with a footprint in New Jersey that have received drug approval in 2016. It is these achievements which allow Patients to live better, more productive and longer lives.” Of note, James Sapirstein, R.Ph., M.B.A., CEO of ContraVir Pharmaceuticals, Inc., is now BioNJ’s 2017 chairman.

Overall, the evening was a veritable “who’s who” of those involved with New Jersey life sciences, and, at one point, an almost rock-concert atmosphere engulfed the room as Taylor Tote performed the song “Fighter” live, with Natalie and Hannah Gorsegner.

BioNJ’s May 12 HR Conference to Focus on ‘People, Passion and Purpose’