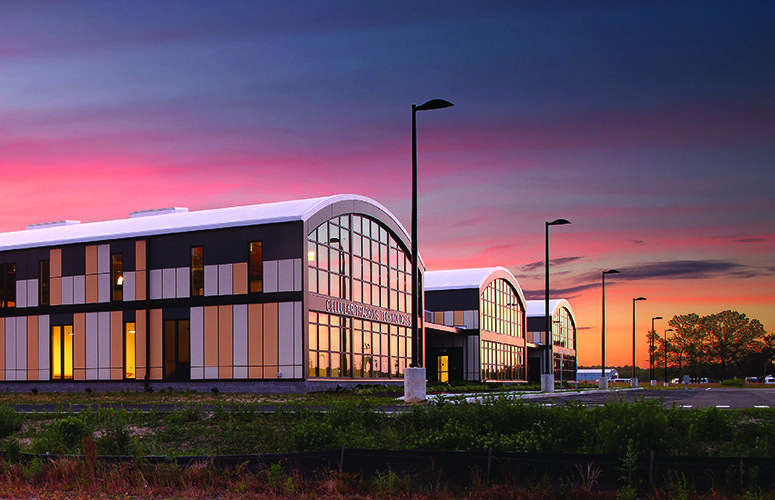 A portion of the recently completed 20,000-square-foot Hangars Technology Park at the Cape May Airport. Current tenants include Cellular Tracking Technologies, D-Tech International, and Aedicell. On December 9, Cape May County received a $3 million grant from the U.S. Economic Development Administration (USEDA) for construction of a 16,000-square-foot, multi-tenant building at the site.
General Business

While Atlantic and Camden counties usually make the headlines when it comes to business news in Southern New Jersey, the following article tells the tale of economic development in Gloucester, Cape May, Burlington, Salem and Cumberland counties.

Southern New Jersey is in many ways worlds apart from the Northern and Central regions of the state. More rural and less densely populated, its economy is driven largely by industry, healthcare, education and agriculture. And while Atlantic County, with Atlantic City at its core, and Camden County, a Philadelphia commuting enclave, usually grab the South Jersey spotlight with their massive revitalization projects, some of the area’s lesser-publicized counties – Gloucester, Cape May, Burlington, Salem and Cumberland – are experiencing their share of significant economic development as well.

Pushing some of this growth is the fallout from COVID-19, as many city dwellers have moved to outer suburbs and more rural towns to escape crowding and unrest in the cities and take advantage of remote working opportunities and better housing prices.

“That’s been part of the problem: Getting people to understand that our county is a viable option from a business perspective, especially with access to New York, Philadelphia, Washington, D.C., and Delaware,” says Jerry Velazquez, president and CEO of The Authority NJ (a.k.a. the Cumberland County Improvement Authority). “People are working from home and have the ability to pick where they want to live and work, so they’re looking at Cumberland differently than pre-COVID.”

He says Cumberland County has seen interest from businesses in sectors like manufacturing, warehousing and now the cannabis industry, with three to four large cannabis developments totaling 500,000 to 600,000 square feet anticipated for 2022.

Plans also include expansion of the Millville Airport as well as expansion of companies like Chem Glass, Kres Cold Storage, Rovagnati, Comar Glass, Oatley and Northeast Precast. Additionally, a soon-to-open data center in Deerfield Township will create up to 100 high-paying jobs in the IT field.

Burlington County is also seeing its share of industrial growth, including the opening of a third Moorestown location for OPEX, a warehouse and document & mail automation company, which also has a location in nearby Pennsauken. Meanwhile, the Rockefeller Group, has begun construction of a 345,600-square-foot distribution center approximately eight miles off Exit 7 of the New Jersey Turnpike in Eastampton Township that includes 96 trailer spaces, 54 dock doors, and 4,000 square feet of speculative office space.

On December 9, Cape May County received a $3 million grant from the U.S. Economic Development Administration (USEDA) for construction of a 16,000-square-foot, multi-tenant building at the Cape May County Airport’s Hangars Technology Park. This project will complement a recently completed 20,000-square-foot hangar-like structure whose tenants include: Cellular Tracking Technologies, a leader in wildlife telemetry and IoT solutions; D-Tech International, which makes self-service library kiosks; and Aedicell, a regenerative medicine company.

It’s all part of Coastal Shift, an effort to bring new industries to Cape May County that provide well-paying, year-round jobs. Tourism has always been the economic driver for the county, which attracts about 10.2 million visitors annually, but with a year-round population of just 95,000, officials are embarking on projects that will attract new businesses and better-paying jobs to the community to jump start a year-round economy.

“This is probably the most engaged the county has ever been in economic development. The USEDA has been a great partner and has looked at how it can invest in and diversify our market here with tech jobs in aviation and give us a real opportunity to grow,” says Joe Molineaux, economic development program manager for the Cape May County Planning Department.

Coastal Shift, which began pre-pandemic and was ramped up as COVID-related lockdowns devastated the tourism industry, also includes a makeover of the County Commons, a 185,000-square-foot complex located in Rio Grande that formerly housed a Kmart and strip mall. The new full-circle plaza, expected to be open by Memorial Day, will feature a movie theater, bowling alley, gaming area, bar, restaurant, federally run veteran’s clinic, and Tractor Supply store.

A Hub of Wind Energy Development

The same week President Biden signed the federal Infrastructure Bill into law in November, New Jersey Senator Bob Menendez announced an award of $9 million in federal funding to the South Jersey Port Corporation for improvement and expansion of the Salem Marine Terminal that will make it possible for larger vessel capacity and intermodal rail connectivity into the terminal.

This came on the heels of the September groundbreaking on the 200-acre New Jersey Wind Port in nearby Lower Alloways Creek, which will serve as a hub for staging, assembly and manufacturing activities related to offshore wind projects on the East Coast. Driven by the New Jersey Economic Development Authority (NJEDA) and PSEG, the Wind Port will include the production and installation of massive wind turbines 15 miles off the coast in the Atlantic Ocean, which are expected to power 500,000 homes.

These projects signal an economic development boom for Salem County. The Port of Salem will generate millions of dollars in new business and the Wind Port will create 1,500 full-time manufacturing, assembly, operations and construction jobs, bringing $500 million in economic activity to the region. Also noteworthy, the NJEDA is working to ensure at least 25% of subcontractors for Wind Port construction are small businesses and at least 15% are women-, minority-, or veteran-owned, while executives have a worker diversity goal of 18% people of color and 6.9% women.

In addition to this project, Salem County has seen growth in warehousing, including an Amazon facility in Carney’s Point, with several other projects in the planning stages across the county. According to Charles Hassler, Salem County economic development coordinator, these are expected to create 4,000-6,000 jobs, and not only warehouse workers but CPAs, logistics experts, and other management positions.

Wind energy is also a major driver in Gloucester County, where Ocean Wind and EEW American Offshore Structures (EEW) have broken ground on the EEW Monopile Manufacturing Facility at the Port of Paulsboro Marine Terminal, which will be the largest facility of its kind in the nation. In addition, Gloucester County is working on the Paulsboro Marine Terminal Phase II Wharf Construction Project, building two deep-water berths along the Delaware River and one 500-foot barge berth on the Mantua Creek.

To support this investment, the NJEDA and Gloucester County Institute of Technology (GCIT) in Deptford Township, will work together to support the expansion of GCIT’s welding and painting programs, with the NJEDA providing up to $75,000 to prepare students and workers for jobs in heavy steel offshore wind component manufacturing. “Investing in the future of the offshore wind industry is just as important as investing in the education to create skilled employees,” says Robert M. Damminger, director of the Gloucester County Board of Commissioners.

Gloucester County is also investing in healthcare with a $205-million expansion of the Jefferson Washington Township Hospital campus, which now features an eight-level enclosed parking facility and seven-floor patient tower. A partnership between Inspira Health and the town of Deptford will bring a $30 million, multi-service health center to the community.

Additionally, Rowan College of South Jersey is home to the Rowan School of Osteopathic Medicine, a two-story building that consists of four medical practices, as well as academic classrooms, a large training room, learning resource area, OMN lab, and research wet lab accommodating 144 students. Complementing this will be a 20,000-square-foot Rowan University medical building in Vineland (Cumberland County), a collaboration between Rowan University and the adjacent Inspira Health Center that is expected to be operational by the end of 2023.

Rowan University and Virtua Health recently signed an affiliation agreement to create a new academic health system and to further distinguish South Jersey as a regional hub for innovation, research and clinical discovery.

This partnership will create the Virtua Health College of Medicine & Health Sciences of Rowan University. The new college will encompass the state’s only osteopathic medical school; an expanded nursing and allied health professions school; a new school of translational biomedical engineering and sciences; multiple new research institutes; and aligned clinical practices to improve patient care and train the workforce of the future.