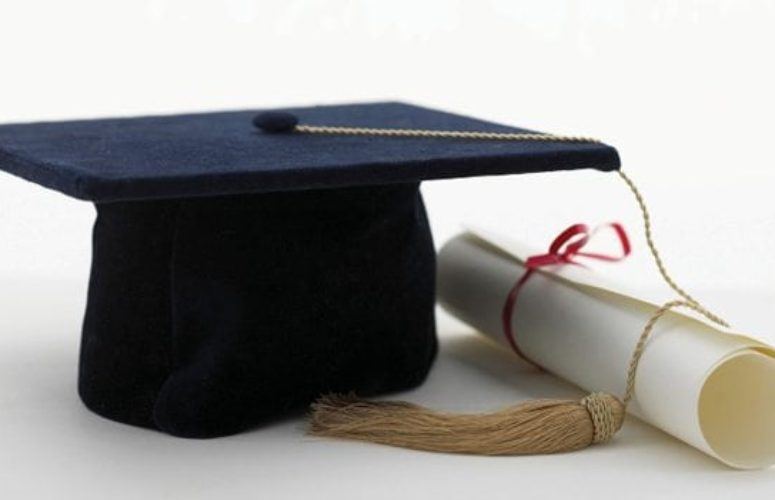 Seton Hall University celebrated its 160th baccalaureate commencement at PNC Bank Arts Center in Holmdel on May 15. Seton Hall graduated 1,465 undergraduate students, making the Class of 2017 the largest in the University’s history.

Among that historic number are triplets, Adrianna, Anthony and Leo Bertoldi from Roseland. They represent the only known triplets to graduate together at the university and are the first generation in their family to graduate from college. Adrianna is a nursing major; Anthony a Business Administration major with a dual concentration in Sport Management and Marketing; and Leo, the oldest of the trio by a few minutes, is a History major with a minor of Political Science.

Delivering the commencement address was Matthew W. Wright ’89, founder and president of Disciplina Group LLC, which includes Disciplina Advisors, a risk consultancy firm, and Disciplina Capital Management, an investment advisory firm. Prior to founding the Disciplina Group, he served as vice chancellor for investments and chief investment officer of Vanderbilt University, the first African American to hold this title at a university with more than a billion dollar endowment. Mr. Wright received a Bachelor of Science in Business with a major in finance from Seton Hall and a Master of Business Administration from the University of Rochester.

Wright told the graduates to “embrace change, take risks, face challenges and makes sure to listen to that still small voice within” and to see this day as “the start of a journey where you ultimately find your purpose.”

Also addressing the graduates was Cardinal Joseph William Tobin, C.Ss.R., Archbishop of Newark and the President of Seton Hall’s Board of Regents and Chair of its Board of Trustees.

Cardinal Tobin pointed out: “We call this day commencement. Suggesting that rather than simply marking a milestone, something new begins today.” He also noted that the graduates now have the skills necessary to “contribute consciously to the good of the state, nation, world and local communities where you live.”

Reflecting on the day, President Meehan, expressed that this year’s graduating class demonstrates academic excellence infused with Catholic ideals that will enable them to be strong, ethical leaders who can affect positive change. She advised the graduates, “Our society is moving quickly into a more ‘cognitive’ age, as they say, in which we all are compelled to learn new ways to process and connect information – but information or knowledge alone are not enough to face these big questions. Your new skills, supported by reason and faith, by ethics and compassion give you the kind of perspectives you’ll need as servant leaders to renew the society you have inherited and to infuse your communities with values that affirm life and justice. The answers you discover will not only define you but will impact countless others.”

“So, fellow graduates, let the content of our futures be defined by the horizons of our present dreams. Let our voices and actions be strong against every injustice encountered along the way. Let our minds be steadfast, our hearts be open, and our spirits be willing,” said Augustine “Gus” Glazov delivering the valedictory address.

Glazov is from Belle Mead and graduated from the College of Arts and Sciences with a B.A. in Philosophy and a minor in Music Performance, Summa Cum Laude.  He has completed internships at the Essex County Prosecutor’s Office and at the Worldwide Orphans Foundation. His studies in philosophy has led to his presentations at conferences throughout the nation as well as participation in the Ethics Bowl Team. He has actively performed in shows and concerts with both the theatre and music departments as well as debuting in Puccini’s Turandot with Teatro Lirico D’Europa in Jacksonville, FL and the Newberry Opera House in South Carolina. For three years he served as a tutor-in-residence for hundreds of students with Housing and Residence Life. Following graduation he will work for Teach for America in Appalachia, before attending law school.

She offered: “We will pave the way for future Pirates and show what it means to hold a diploma from Seton Hall by exemplifying the values of servant leadership that Mother Seton has instilled in us.” She continued, “Save lives in hospitals, educate the next generation, touch hearts by creating art, influence policy, fight for peace at the United Nations or for justice in the courtroom or for truth in the media. And if you choose to define success by financial stability, that’s perfectly well and good. I wish you immense success, so much that one day, you will be able to share those blessings with our University.”