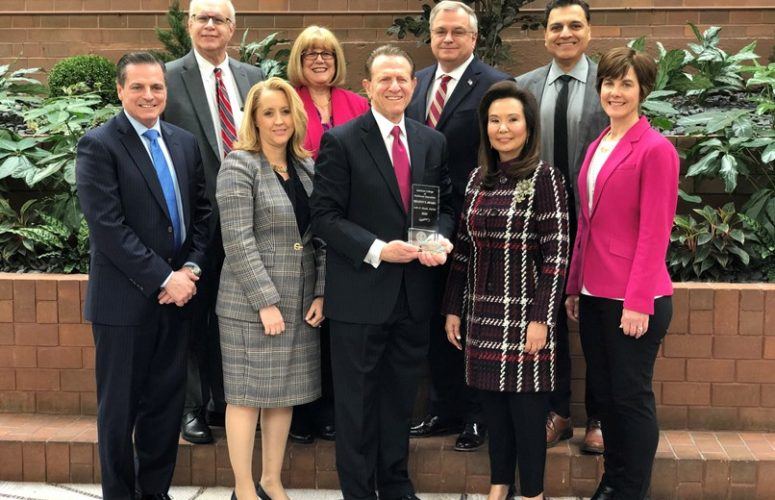 Saint Peter’s University Hospital, a member of Saint Peter’s Healthcare System, has been recognized by the New Jersey Hospital Association (NJHA) with two top awards. The honors were presented at the NJHA’s 101st annual meeting at the Princeton Hyatt Regency. The honors included the HRET Community Outreach Award and Healthcare Professional of the Year Award. In addition, the American College of Healthcare Executives of New Jersey (ACHENJ) presented its Lifetime Achievement Award to Leslie D. Hirsch, president and chief executive officer of Saint Peter’s Healthcare System.

Saint Peter’s University Hospital was selected as a recipient of the Community Outreach Award by The Health Research and Educational Trust of New Jersey (HRET), a nonprofit affiliate of NJHA recognizing healthcare institutions for their programs that successfully fulfill community needs. Saint Peter’s award was granted in the category “social determinants of health.” The hospital shares the honor with Robert Wood Johnson University Hospital and New Brunswick Tomorrow as joint collaborators on the Healthy Homes Project, a cross-sector approach aimed at ensuring all New Brunswick residents live in safe homes that facilitate healthy living.

Over the past two years, the team has focused on improving health outcomes by mitigating housing issues within the Esperanza and Unity Square neighborhoods and identifying those neighborhoods in the city of New Brunswick with the greatest health and social disparities. The Collaborative uses a socio-ecological model to address the issue of housing in many levels of the community for maximum impact. Housing conditions such as dilapidated structure, poor heating, rusty plumbing, mold, dust and lead paint are all associated with adverse health conditions like respiratory infections, asthma and lead poisoning. The Collaborative uses a referral system, working with its two partner hospitals, local health clinics, community-based organizations and neighborhood projects to direct community members towards available resources. The common goal of all Collaborative participants is the promotion of personal health and healthy living environments.

“As a faith-based healthcare institution, we have a duty to support the underserved in our community,” said Leslie D. Hirsch, president and chief executive officer, Saint Peter’s Healthcare System. “Our participation in the Healthy Homes initiative is just one way we put our Catholic mission into action on an everyday basis, providing educational resources that promote proactive, preventive healthcare measures to all residents, regardless of socioeconomic limitations.”

Hirsch has continued to foster Saint Peter’s Catholic mission, while also establishing a culture of inclusivity. During his tenure, the hospital collaborated with the Shri Krishna Nidhi (SKN) Foundation to form and establish the SKN South Asian Diabetes Center at Saint Peter’s. In this capacity, Hirsch has worked in partnership with the Center’s most vocal advocate, Meena S. Murthy, MD, FACE, chief, Division of Endocrinology, Nutrition and Metabolism at Saint Peter’s University Hospital.

Murthy is the recipient of the NJHA Healthcare Professional of the Year for her tireless efforts on behalf of diabetes education and prevention in the South Asian Community. Under her leadership, dedication, and direction, the Center has grown and flourished. Dr. Murthy goes above and beyond to build connections that foster trust between patients and the medical community. She is dedicated to educating and empowering individuals with the understanding that diabetes can not only be delayed but prevented. The focus of her efforts includes awareness, education, advocacy, assessment, care, population health and access to support and resources, especially with a focus on New Jersey’s South Asian community where the incidence of the disease is greatest.