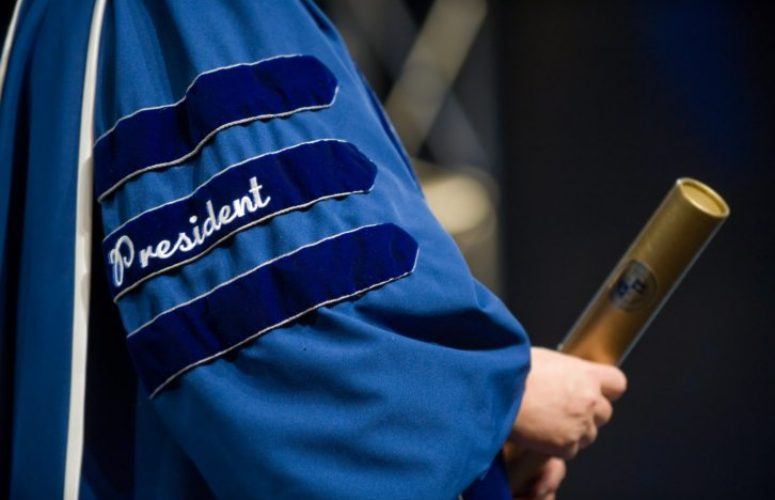 Rutgers University officially appoints Jonathan Holloway, provost of Northwestern University and an eminent historian, as the 21st president of the university.

Holloway will begin serving as president on July 1, 2020, succeeding President Robert Barchi, who began his tenure in September 2012.

Holloway, 52, has served as Northwestern University provost since 2017. He is Northwestern’s chief academic officer, overseeing educational policies and academic priorities, preparation of the annual budget and faculty appointments and promotions at the Big Ten institution which includes a highly ranked medical school and numerous other nationally and internationally recognized educational programs.

“Jonathan Holloway is an extraordinarily distinguished scholar with an outstanding record as an academic administrator at Northwestern and Yale. He is thoughtful, visionary, inclusive and decisive. He leads with remarkable integrity, and is just the right person to build upon Rutgers’ long tradition as an academic and research powerhouse,” said Rutgers Board of Governors Chair Mark Angelson who also chaired the presidential search committee.

“Selecting our university president is perhaps the Board of Governors’ most important responsibility. We are confident that we have chosen the best person to lead Rutgers into the future,” he said.

Holloway received a bachelor’s degree with honors in American Studies from Stanford University and a Ph.D. in History from Yale University. He began his academic career at the University of California, San Diego, before joining the faculty at Yale in 1999.

“I was drawn to the opportunity at Rutgers University because of its amazing history, its foundation of excellence in teaching and its ambition to continue conducting life-changing research that improves our communities, our country and our world,” Holloway said.

“Bob Barchi’s extraordinary leadership has helped place Rutgers among the preeminent public universities in the world,” he added. “I cannot wait to help write the next chapter in the history of this magnificent institution.”

Holloway is the author of Confronting the Veil: Abram Harris Jr., E. Franklin Frazier, and Ralph Bunche, 1919-1941 (2002) and Jim Crow Wisdom: Memory and Identity in Black America Since 1940 (2013), both published by the University of North Carolina Press. He edited Ralph Bunche’s A Brief and Tentative Analysis of Negro Leadership (NYU Press, 2005) and coedited Black Scholars on the Line: Race, Social Science, and American Thought in the 20th Century (Notre Dame University Press, 2007). He wrote the introduction for the 2015 edition of W.E.B. Du Bois’s Souls of Black Folk (Yale University Press), has submitted a survey tentatively titled “The Cause of Freedom: A Concise History of the African American Past” for Oxford University Press and is working on a new book, A History of Absence: Race and the Making of the Modern World.

He serves on boards of the Chicago Botanic Garden, Illinois Humanities, the National Humanities Alliance, the Society for United States Intellectual History and the Organization of American Historians.

Holloway is an elected member of the prestigious American Academy of Arts and Sciences and the Society of American Historians.

Holloway is married to Aisling Colón. They have a daughter, Emerson, and son, Ellison.

The 23-member presidential search committee, comprising broad representation from the universitywide community, including students, alumni, faculty, staff and members of university boards, received more than 200 nominations and applications. Vice chairs of the committee, convened in September 2019, are Deborah Gray White, Board of Governors Professor of History and professor of women’s and gender studies in the School of Arts and Sciences at Rutgers University-New Brunswick, and William Best, a Board of Governors member, former chair of the Board of Trustees and an emeritus trustee.