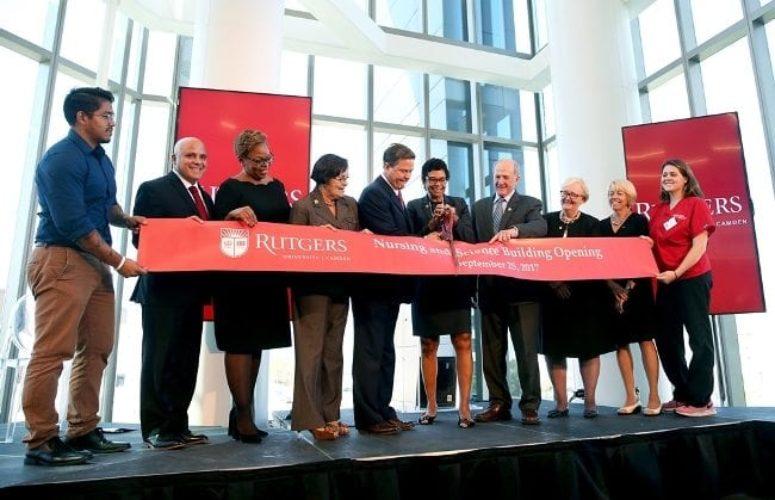 Strengthening Rutgers University–Camden’s role as a regional leader in health care and the sciences, the 107,000-square-foot Nursing and Science Building, located at Fifth and Federal Sts. in Camden, has opened.

A ribbon-cutting ceremony was held on Sept. 25, officially dedicating the $62.5-million world-class teaching and research facility, which allows Rutgers–Camden to expand its ability to prepare a new generation of science and nursing leaders for New Jersey and the region.

“This is a transformative moment for Camden,” Rutgers–Camden Chancellor Phoebe Haddon told more than 200 guests in attendance. “This building represents Rutgers’ first bold step in forging an ‘eds and meds’ corridor that moves us closer toward our vision of a city where innovation in health care and bioscience commands the imagination of the world.”

Supported by funds from the higher education bond referendum passed by New Jersey voters in November 2012, the burgeoning education and medical corridor in Camden will connect the city’s University District – which includes the Rutgers–Camden campus – with the neighborhood populated by Cooper University Hospital, the Coriell Institute for Medical Research, and the Cooper Medical School of Rowan University.

Rutgers University President Robert Barchi lauded the extraordinary “two-way street” that has enabled Rutgers and the city of Camden to thrive. He poignantly noted that the Nursing and Science Building is located within view of Camden City Hall, where – on the side of the building – the words of Walt Whitman are etched: “In a dream, I saw a city invincible.”

Camden Mayor Dana Redd echoed the sentiment, lauding Rutgers–Camden’s pioneering spirit and praising the university as a leading partner in the city’s transformation.

“This facility is yet another Rutgers symbol of excellence and pride that will be used for many decades to come,” said Redd, a 1996 graduate of the Rutgers School of Business–Camden.

The Nursing and Science Building now serves as the primary research and teaching facility for Rutgers–Camden students and faculty in the areas of the sciences and physics at the undergraduate and graduate levels.

Brooke Trigiani, a junior nursing student and vice president of the Student Nurses Association at Rutgers–Camden, applauded the new facility as a place for nursing and science students to develop not only their skills and expertise, but a sense of community with one another.

“We now have the opportunity to better build relationships with one another as students and to create a support structure that will last well beyond college,” said Trigiani. “This new building is more than just space for more classrooms; it is a resource to develop future nursing and scientific leaders in our community.”

More than 1,000 students in undergraduate and graduate programs will benefit each year from the facility’s array of cutting-edge computer labs, classrooms, conference rooms, lecture halls, student work and study stations, and faculty and administrative offices.

“Developments such as this building are what make Rutgers–Camden students passionate about coming to school, learning new things, and being more engaged,” said Daniel Miranda, a sophomore mechanical engineering major, resident assistant, athlete, and student leader at Rutgers–Camden. “I am personally looking forward to this year and seeing how the new Nursing and Science Building becomes a new hub for students to learn and grow.”

Among the many innovative features of the new building, Rutgers School of Nursing–Camden students thrive with “hands-on” instruction via two nursing lab stations: the Simulation Lab and the Basic Clinical Competencies Lab. Together, these labs comprise 9,160 square feet that provide students with realistic hospital, outpatient, and home care settings to refine their skills and develop “muscle memory” in a variety of challenging environments.

Students and faculty are also defining new concepts in physics through the use of laser technology in the Physics Laser Materials Lab. This new lab space incorporates significant equipment that has been funded by National Science Foundation awards to Rutgers University–Camden and supports a wide range of physics research studies.