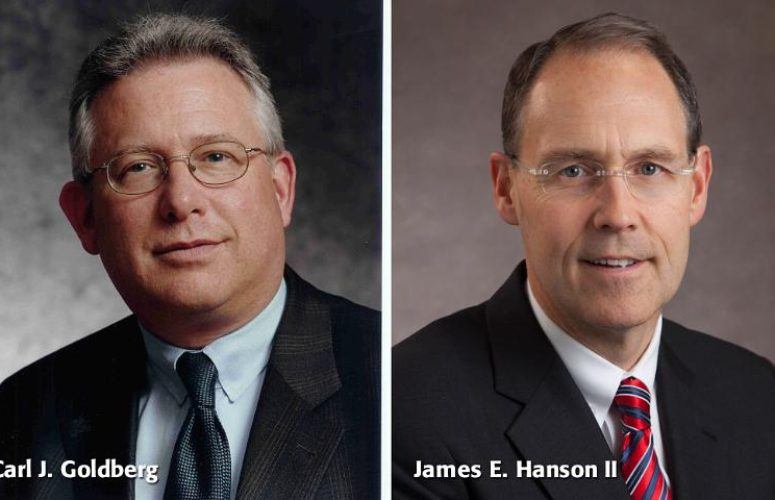 Hanson, president and chief executive officer of The Hampshire Companies, and Goldberg, who co-founded Roseland Property Co., will serve as the public faces of the center and have major roles in establishing the center, developing its programs and shaping its reputation.

The two men will work closely with five other influential, high-profile real estate professionals who have agreed to sit as members of the center’s executive committee.

Professor Morris A. Davis, the Paul V. Profeta Chair of Real Estate and the academic director of the Center for Real Estate Studies, described the willingness of Hanson and Goldberg to serve as co-chairmen as a “coup” for Rutgers.

“For the center to be considered a world leader, it needs strong academic credentials and leadership and a visible, active and recognized industry presence,” Davis said. “James Hanson and Carl Goldberg are two of the top real estate professionals in New Jersey and the New York metropolitan area.”

“They add instant credibility and gravitas to the strategy of the Center for Real Estate Studies,” Davis said.

Goldberg recently formed Canoe Brook Associates, a new venture that provides real estate consulting services, but he is widely known for co-founding Roseland Property, one of the leading urban infill redevelopers in the Northeast. The company transformed the North Jersey waterfront with a mix of housing, retail and office development known as Port Imperial. Goldberg also served as chairman of the Sports and Exposition Authority for seven years. As chairman, he was instrumental in leading negotiations that resulted in the development of the Meadowlands Stadium.

Hanson said he is interested in helping to build a center that will shape the next generation of leadership in the real estate industry.

“I can help put the system and structure in place by recruiting people in business to become a part of the center and by bringing my influence to develop a program that will enrich students as well as the industry,” he said.

Goldberg said creating a center of learning for real estate professionals is critical because of the industry’s importance to the state economy.

“Real estate is a major business for the state,” Goldberg said. “It’s critically important for Rutgers, as part of its business school, to provide opportunities for students to learn all the elements of being successful practitioners in the real estate business.”

The executive committee will serve as advisers to Davis and the co-chairmen on all aspects of strategy involved with establishing and operating the center.

The committee is made up of the following industry veterans:

George H. Jacobs began working in the real estate industry in 1974.  He is currently a managing member of an acquisition and development fund valued at more than $100 million. His most recent projects in New Jersey include Teachers Village in Newark, the Styertowne shopping center and apartments in Clifton, the Livingston Town Center, Livingston, and Pointe Grande Center in Elizabeth. He previously was a principal with Hartz Mountain Industries. He is an alumnus of Rutgers University. He earned a Master of City and Regional Planning degree at Harvard and an MBA from Rutgers Business School.

Ronald S. Ladell is a senior vice president at AvalonBay Communities, Inc., an equity REIT. He oversees AvalonBay’s development activities in New Jersey, which currently include projects in Roseland, Bloomfield, Wharton and Princeton. His experience as a real estate industry executive includes a previous role as vice president for business development for a developer and operator of multi-family, retail and office properties as well as general counsel and director of development for a restaurant and hotel developer in the Northeast. A graduate of Rutgers University Law School and an alumnus of Rutgers University, New Brunswick, he began his career as a real estate and corporate attorney.

Gualberto “Gil” Medina is executive vice president of CBRE, Inc., one of the world’s largest commercial real estate services firms. He is responsible for local and global business development across all of the company’s lines of service, including office, industrial and retail brokerage and financial consulting. He previously worked at Cushman & Wakefield as an executive managing director. In addition to his real estate experience, he has expertise in economic development and business development. He served as a secretary of commerce in New Jersey and as an attorney adviser for the U.S. Department of Housing and Urban Development. He is an attorney, certified public accountant, licensed real estate broker and a Rutgers University alumnus.

Paul V. Profeta launched a real estate investment company, Paul V. Profeta & Associates, in 1976, which has invested in office, industrial and multi-family housing properties across the country. A graduate of Harvard University and Harvard Business School’s MBA program, Profeta has worked as an associate adjunct professor at Columbia Graduate School of Business, where he co-founded the Real Estate Finance Department. In 2008, he founded the Profeta Urban Investment Foundation, which provides seed funding for start-up and early-stage minority owned business ventures in Newark. Funding from the foundation also helped to create The Center for Urban Entrepreneurship and Economic Development at Rutgers Business School.

Ted Zangari is a member of Sills, Cummis & Gross, a commercial law firm with offices in Newark and Princeton. He is chair of the firm’s real estate department and also chairs the firm’s redevelopment law practice group, which handles matters related to large-scale mixed use projects, including land assemblage, tax increment financing and environmental remediation. He also routinely handles complex real estate transactions involving commercial leases and financing transactions for owners, lenders and tenants of office buildings and shopping centers across the U.S. In 2007, he convened the inaugural meeting of the Smart Growth Economic Development Coalition to develop legislation addressing the out-migration of jobs and residents as well as the longer term supply problem of housing future residents and businesses. The coalition, which now includes 26 trade associations, has seen many of its legislative initiatives become law.

Davis described the members of the executive committee as “an impressive team of industry leaders.”

“They are seasoned CEOs and professionals who are respected throughout the state of New Jersey and the New York City metro area,” he said.

Davis, a former economist with the Federal Reserve and an expert in housing macroeconomics, was named in July to fill the inaugural Paul V. Profeta Chair in Real Estate. The endowed faculty position was created with $1.5 million from Profeta and a matching gift from an anonymous donor.

The creation of the endowed chair was the catalyst for the new Center for Real Estate Studies, which will help to build and support curriculum, training programs and encourage leading industry research by academic experts such as Davis. The real estate curriculum at Rutgers Business School will begin with undergraduate studies, but eventually include an MBA program.

Profeta, who has taught real estate finance in the past at other graduate schools, said Davis is the first academic he’s met who has presented a viable plan for building a program.

“Morris Davis wants to make the Rutgers Center for Real Estate Studies the premier real estate center in the country in a short period of time,” Profeta said. “I feel very comfortable saying, I am sure it will happen.”