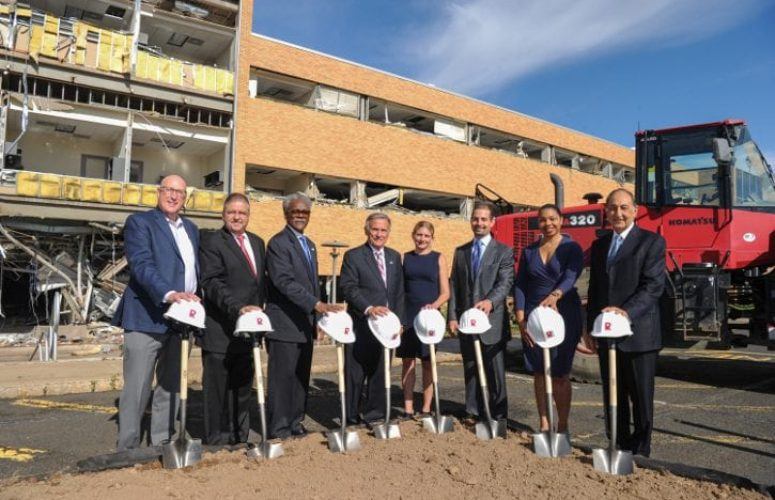 On Tues., Oct. 10th, Russo Development celebrates the groundbreaking for the first phase of Vermella Union, a mixed-used development on the former Merck Site at 1011 Morris Ave. in Union Township comprised of 462 rental apartments, 65,000 square feet of indoor/outdoor amenities, and 40,000 square feet of retail space.

Russo Development was recently joined by Union Township and Kean University officials for a groundbreaking ceremony at its newest mixed-use development, Vermella Union.

“Vermella Union is the result of more than three years of collaboration with Union Township on the planning and design of one of the largest mixed-use developments in northern New Jersey during the next decade,” said EdwardRusso, Chief Executive of Russo Development.  “This property was one of the most significant pharmaceutical facilities in the state before becoming vacant several years ago. Union Township had the vision to adopt a thoughtful Redevelopment Plan that was needed to allow the transformation of this unique site into a first-class destination that will complement Kean University and the surrounding community.”

Russo purchased the 55-acre property, which is adjacent to Kean University and the Union Train Station, from Merck in June 2017.  Russo recently sold 13 of the 55 acres to Kean University, which will use its portion of the site for additional parking and future development to support the University’s continued growth.

“Union Township has been very proactive towards creating meaningful redevelopment in our community” said Mayor Suzette Cavadas. “During the past five years, we have seen several notable redevelopment projects completed in our Town including the former Red Devil, Tuscan Dairy, and National Envelope sites which today are home to over 200,000 square feet of modern industrial space and several hundred new housing units. Vermella Union will continue that tradition and will be the most significant redevelopment project in our community for many years.”

The Vermella Union site is unique partly because of its adjacency to Kean, one of the premier universities in New Jersey. Since its establishment over 150 years ago, Kean has grown into a world class institution with over 16,000 students. Over the last ten years, Kean has completed several notable capital projects along the Morris Avenue corridor including the Science, Technology and Math (“STEM”) building, the Green Lane and North Avenue Academic Buildings which provided over 300,000 square feet of Class “A” academic space.

Demolition work is currently underway at the site and vertical construction of the first phase of Vermella Union is expected to commence in the Spring of 2018, with initial occupancy planned for late 2019. The project is steps away from the Union Train Station and is ideal for commuters looking for proximity to employment hubs while still enjoying the benefits of suburban life in a great community with easy access to local retail and entertainment uses.

The Value of an MBA

ATCC and the ILSE Collaborate to Establish a New Microbiology Center