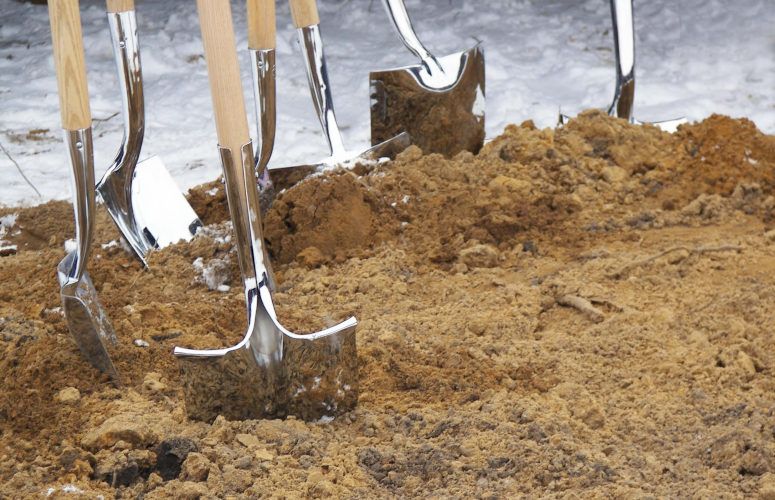 Rowan University recently broke ground on the region’s newest museum, a world-class destination that will explore the distant, local past around themes of a more sustainable future.

Designed with world-renowned architects and experience design firms, the $73 million, 44,000-square-foot Jean & Ric Edelman Fossil Park Museum in Mantua was inspired by the deep-time perspective that the fossil record offers. Set into the 65-acre Fossil Park, the museum will perch above a four-acre former marl quarry where 66-million-year-old marine and terrestrial fossils record the last moments of the dinosaur world. The museum is projected to open in May 2023.

Research at the site, which Rowan purchased from the Inversand Company in 2015, is led by Dr. Kenneth Lacovara, founding dean of the School of Earth & Environment and director of the Jean & Ric Edelman Fossil Park. Already, that research is shedding light on ancient events that led to the world’s fifth mass extinction, a calamitous die-off in which most dinosaurs (except birds) and 75% of other species went extinct.

Within the museum’s exhibit halls, visitors will be transported back to a time when dinosaurs roamed the coast, and fearsome mosasaurs, giant sea turtles and crocodiles patrolled the sea. Lacovara said the museum will also provide opportunities for the exploration of contemporary times, in particular the rapidly worsening climate and biodiversity crises.

“We are building a museum like no other, on a fossil site of global importance that will connect visitors to the ancient past, to the thrill of discovery and to Rowan University,” Lacovara said before the groundbreaking.

Guests will be astounded, he said, from the moment they enter the lobby, where they’ll see “skeletal reconstructions of creatures that existed right here, 66 million years ago.”

Visitors will enter land and sea galleries of the Late Cretaceous worlds and wonder at the hyper-local focus, like a recreated Brontosaurus, the first discovered tyrannosaur, which was found just a mile from the Fossil Park site in 1866, and a 53-foot mosasaur, like one discovered at the site, “that swam through the seas, right where you are sitting.”

The Hall of Cretaceous Seas will feature a vast collection of marine recreations, including dozens by world-renowned paleo sculptor Gary Staab, while the Hall of Extinction & Hope will enable visitors to experience the demise of the dinosaurs, to immerse themselves in knowledge about the ongoing climate and biodiversity crises, and to explore a network of resources to take action about them.

Elsewhere, “Discovery Forest” will feature hands-on learning stations and “Critter Cove” will contain sea and land animals with genetic connections to the site during the Late Cretaceous era. There will also be a Fossil Research Workshop, a virtual reality chamber, Café, museum store, paleo-themed playground and nature trails.

Shortly after Rowan’s purchase of the Fossil Park site, alumni Ric & Jean Edelman gave $25 million to develop it as a unique research ecosystem that supports scientific, undergraduate and “citizen science” opportunities. Pre-pandemic, the park hosted thousands of visitors per year, from school kids on bus trips to business people and community leaders, all of whom are drawn to the prospect of finding genuine, Late Cretaceous-era, fossils.

Referring to herself, her husband and Lacovara, all three of whom are Rowan alumni, Jean Edelman said, “for three humble kids from (the former) Glassboro State College, it’s very hard to believe that, here we are, in this amazing spot with all of you… creating this amazing museum that’s going to be here for generations.”

While the couple’s extraordinary gift will finance more than a third of the museum’s construction, Ric Edelman said the most important aspect of the project is the educational impact it will have.

To date, just a few hundred square yards of the 65-acre site have been fully processed but they have yielded more than 50,000 cataloged marine and terrestrial fossils, from reptilian mosasaurs to sea turtles, sharks, boney fish, coral and clams.

An economic impact study conducted ahead of the museum’s construction predicted that an estimated 200,000 or more fossil hunters will visit the park and museum each year, producing more than $300 million in economic activity over a 10-year period.

“The impact this project will have on our region cannot be overstated,” said Rowan University President Ali A. Houshmand. “From educational and research opportunities to jobs and tourism, every dollar spent developing the fossil park and museum will return to the community many times over.”

Featuring geothermal, water-source heating and cooling systems and a photovoltaic solar field, the museum will be New Jersey’s largest public net-zero building. This means that 100% of the energy used by the museum will come from renewable on-site sources and/or green energy through New Jersey’s power grid. In addition, the surrounding grounds will restore plant and animal habitat and other landscape features.

Special thanks to partners

Early and enthusiastic support from Mantua Township and Gloucester County officials, residents and volunteers has been crucial to the Fossil Park’s success and, ultimately, the forthcoming museum. Community Dig Days each fall typically draw upwards of 2,000 fossil hunters and the park hosts a variety of programs, from private fossil digs to summer camps, throughout the year. In fact, the Jean & Ric Edelman Fossil Park is the only facility east of the Mississippi River that has an actively open quarry for public dig days.

NJ Jobless Workers Have Received $23.4B in COVID-Related Benefits