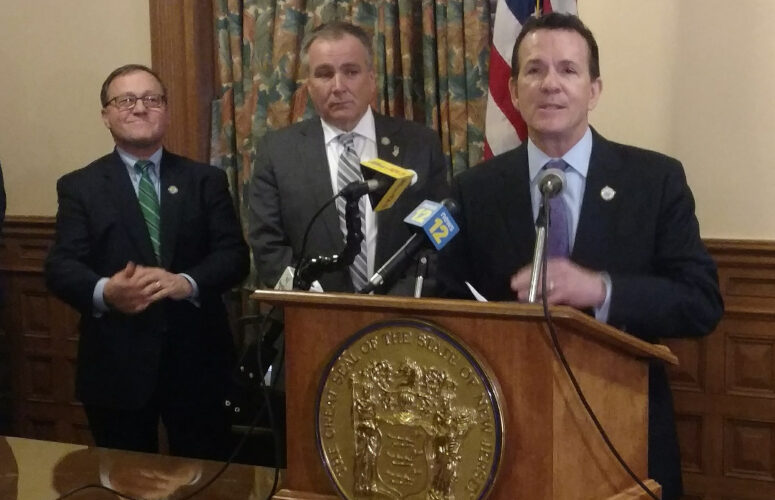 With the state of New Jersey flush with a record $4.2 billion budget surplus, Republican leaders and budget committee officers said property tax relief money should go to state residents immediately via their Give It Back tax credit plan rather than wait for Gov. Phil Murphy’s proposed ANCHOR program, which would kick in sometime during the fall – or as late as next spring.

As they responded to the governor’s $48.9 billion budget proposal yesterday, the Republicans also said real property tax reform should be addressed through a school funding formula that benefits all districts, the return of $2.6 billion in energy receipt dollars to municipalities, and reinstating the 2% cap on police and fire interest arbitration awards. They also said $3 billion in federal American Rescue Plan Act (ARPA) money that has not yet been allocated should go toward replenishing the state’s Unemployment Insurance (UI) Trust Fund.

While Murphy’s $900 million ANCHOR program, which stands for Affordable New Jersey Communities for Homeowners and Renters, would give 1.15 million homeowners earning up to $250,000 an average rebate of $700 for FY 2023 (growing to $1,150 by FY2025 for a $1.5 billion annual program), the Republicans’ Give It Back bill would return $3 billion to approximately 4 million taxpayers when they file their 2021 tax returns. Families would get refundable credits of $1,000.

Referring to Murphy’s program, Republican Senate Leader Steven Oroho (R-24) said to be careful of promises made today that could be taken away tomorrow.

Since the property tax Homestead Rebated program was introduced by Gov. Brendan Byrne in 1977, it has gone through changes over the years, with a decrease in the number of those eligible, a decrease in rebate amounts, and rebates turning into tax credits.

Republican Budget Officer Senator Declan O’Scanlon may have driven the point home when he said the ANCHOR program is “an anchor around the necks of property taxpayers because past property tax relief measures in the state never lived up to the hype.”

Regarding the UI Trust Fund, in which businesses are facing $1 billion in tax increases over the next three fiscal years, former state Labor Commissioner and Republican Budget Officer Assemblyman Hal Wirths (R-24) said, “Why in God’s name can’t we put money back into it? You have $3 billion in unspent federal money and you are not going to put that in the fund?

“Is the governor saying businesses can pay it after 40% of small businesses closed during the pandemic?” Wirths asked.

Discussing the extra funds the state has, including the $4.2 billion surplus, the $3 billion in non-allocated ARPA money, the $4 billion the state borrowed in 2020 to shore up its finances at the outset of the COVID-19 pandemic (which certain legislators on both sides of the aisle said was not needed), O’Scanlon said, “The question is, ‘Do we have all of this money because our fiscal house is in order and we are efficiently running the government with scads and scads of money going on forever? …. That’s simply not the case.”

Assembly Republican Leader John DiMaio (R-23) pointed out that budget spending, including the current budget proposal, will have gone up by $16 billion over a five-year period under Gov. Murphy. This year’s budget proposal represents a $2.5 billion increase compared to last year.

“This year’s budget has increased by 5%, and nothing is being done to substantially deal with property taxes, which is the No. 1 issue that is hurting middle-class families,” DiMaio said, adding that the state is collecting $2.6 billion more in property taxes than when Murphy came into office.

Cost of a Jersey Shore Vacation Jumps Over 16%