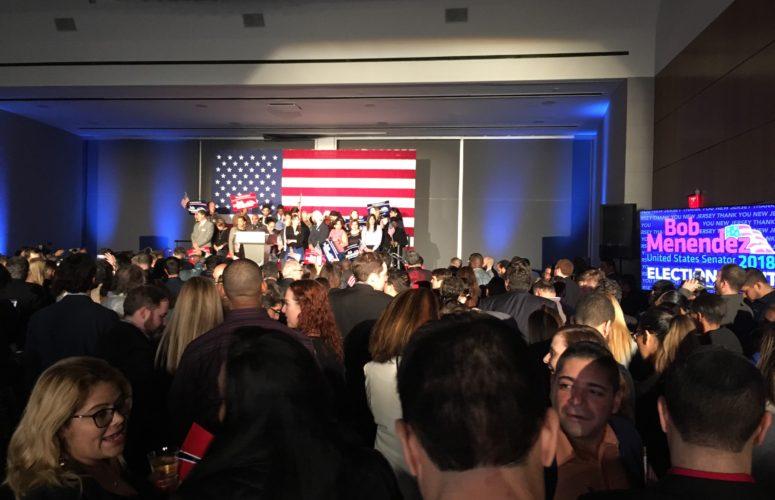 A celebration in Hoboken for Senator Bob Menendez.
Government

By Editors George N. Saliba and Anthony Birritteri On Nov 7, 2018

Hoboken and Mountainside – Incumbent Democratic U.S. Senator Bob Menendez tonight defeated Republican challenger Bob Hugin by about 10 percentage points, following a contentious campaign between the two men, and against the backdrop of an acutely polarized nation. Several recent polls had given Menendez a statistical lead over Hugin. Menendez became a U.S. senator in 2006, is the son of Cuban immigrants and a Hudson County native.

Addressing a crowd of highly enthusiastic supporters on the second floor of the W Hotel in Hoboken, Menendez highlighted myriad differences between President Donald Trump’s and his own views, and vowed to fight for – among other things – restoring the SALT deduction for New Jersey residents, preventing offshore drilling in New Jersey and protecting Medicare, Medicaid, the Affordable Care Act and Social Security, for example.

He also said, “We know that diversity is America’s greatest strength, that we are best when we stand with something greater than our own selves; that we appeal to our best angels rather than our worst fears.”

Governor Murphy had early spoken to the audience and then introduced Menendez, declaring, in part, “Now the campaign is done, the polls have closed, the votes have been counted, and the people have spoken: And we the people have said, ‘We want Senator Bob Menendez.’” Murphy also criticized President Donald Trump’s stances.

Talking to a room full of supporters with his wife and daughter by his side, Hugin said that as a former Marine, he will “never give up the fight” for New Jersey residents.

“Unfortunately, the tough issues in New Jersey are not going to go away. I will continue to fight for those issues. You deserve better,” he told the audience gathered at the Stage House Tavern, which was, at times, drowning out his speech with its repetitive chants of “Hugin! Hugin!”

He said he was proud of the campaign he and his team ran, adding that he and his family have been “blessed” by the countless New Jerseyans who welcomed them … and that, he commented, “could not be more fulfilling.”

This particular Senate race was close up to just before its final days, with polls showing Hugin always within the margin of error of having a chance to beat the incumbent Senator. Had he won, Hugin would have been the first Republican candidate to be elected to the US Senate from New Jersey since Clifford Case won his last re-election bid in 1972. However, things changed two to three days prior to this election with Menendez obtaining up to a 14-point lead in certain polls.