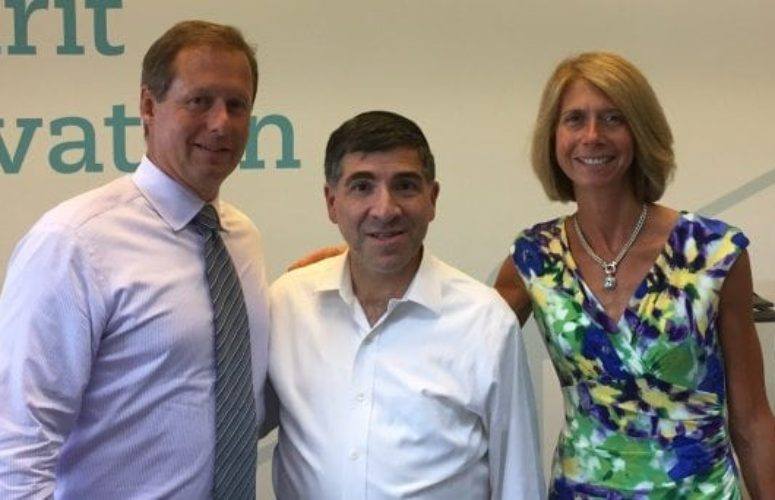 Redevelopment That Works, at Bell Works

When the last remnants of Bell Labs’ former complex in Holmdel were vacated approximately eight years ago, the massive two-million-square-foot site – an epicenter of 20th century technological innovation – sat in disuse. Then, via collaborative efforts by many entities, the site began signing new tenants in 2015, and the entire complex today is abuzz with construction workers, with additional tenants signing leases on a routine basis.

Michele N. Siekerka, president and CEO of the New Jersey Business & Industry Association (NJBIA), says, “While touring Bell Works, I felt transformation taking place all around me. In a time where suburban office parks are unfortunately becoming dinosaurs, the vision of a ‘metroburb’ like Bell Works is exactly what New Jersey needs – a place to attract growth and create jobs, especially jobs that attract millennials which I understand make up 60 percent of the current workforce housed there.”

While some people in the broader business community may have an inkling of what is occurring at Bell Works, former Holmdel Mayor Eric Hinds tells NEW JERSEY BUSINESS, “I have given probably 30 tours of this site, with an average of 20 people each; that’s 600 or 700 people.  The vast majority of them are from Holmdel. I cannot tell you how many people had no idea this [redevelopment] was happening. And this is my town.”

With dining establishments, a fitness center, and tech company tenants such as iCIMS, WorkWave and Nvidia (think: driverless car technology) in the mix, Hinds says, “This is such an incredible, huge win for the state. … We have kept technology companies from going to Austin, Texas or Palo Alto. This is pride, here. I think we have got to dig in and really celebrate this, a little bit.” 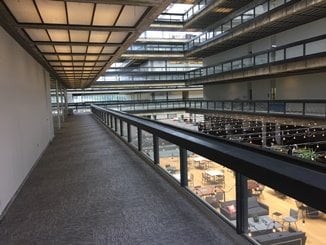 An inside view of Bell Works in Holmdel.

It is not simply a matter of signing tenants: The town’s library is moving into 16,000 square feet at the site and a hotel is planned, for example. Overall, Hinds adds, “If you talk to people who grew up in Holmdel, they used to refer to the Bell Labs as sort of the Charlie and the Chocolate Factory.  It was this hidden spectacle on the hill that nobody ever went in, unless you worked here. The big difference now is this entire first floor will be very community oriented.  We are going to have a library, here.  We are going to have five restaurants, here.  This entire side is going to be all medical offices, orthodontists, dentists and family pediatricians.  We have talked about everything from hair and nail salons to yoga studios.”  Of note, July 4th fireworks were displayed outside the building, this summer.

Perhaps what cannot be overemphasized are the design changes being made to the building: When Bell Labs occupied the site, research and development personnel worked in rooms that typically had few windows.  Now, since the building’s walls are not load-bearing from an engineering-design standpoint, nearly five miles of new glass walls are in the process of being installed.

Five miles of glass reveal the size and scale of the complex, which was built in 1962 and once housed up to 6,500 workers. When one walks from one side of Bell Works’ immense, open-air, five-story atrium to the other, it requires traveling the length of approximately six football fields (when standing at one end, people at its other side appear physically small, due to the distance involved). In addition to the aforementioned new glass walls, the HVAC system was modernized, and LED lighting is common throughout the site.

Where are the site’s new workers commuting from?  Ralph Zucker, president of Somerset Development, says, “[This area] is still close enough to [New York City] to commute in, but it is just far enough to be a long commute.  There are so many people who do that because they are looking for great places to work. ”

He adds, “What we bet on – and it was a good bet – is that if you create a great place to work closer to home, you can cut that commute and still give people a place of inspiration.  People don’t want to work in mind-numbing office parks.”

The redevelopment of the former Bell Labs site is perhaps a “win” for Holmdel, the site’s tenants and workers, and New Jersey.

Zucker concludes, “We are probably in the third year of a five-year plan. In about two-and-a-half years, we should be close to full occupancy. And that is not leasing; that is occupancy.”