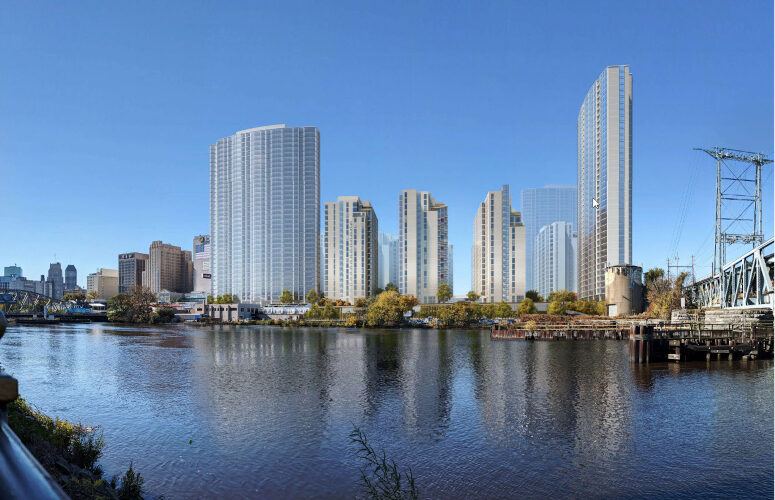 A nine-phase redevelopment project by Accurate Builders & Developers that will reshape the Newark skyline and create a new transit-oriented neighborhood on the site of the former Newark Bears & Eagles Riverfront Stadium has been approved by the Newark Planning Board.

At its December meeting, the board unanimously approved plans for phase one of the development, which consists of two eighteen-story residential buildings containing 299 units each. A single-story of amenity and commercial space that will connect the two buildings is also part of phase one, delivering nearly 22,000 square feet of restaurant and retail space and 15,000 square feet of amenities.

In addition to phase one approval, the Planning Board unanimously voted to give preliminary major site plan approval to the entire project, phases one through nine.

The new development, which will be known as CitiSquare Newark, will ultimately consist of 11 buildings, 4,200 residential units, 100,000 square feet of commercial, office and hospitality space, and up to 3,000 parking spaces in a vibrant new neighborhood designed to be a center of culture and connection, just steps from the Newark Broad Street train station and the Riverfront Stadium light rail station.

“The City of Newark has an incredible vision for this property and we are thrilled to partner with them on this exciting project,” said Jack Klugmann, President & CEO of Accurate Builders & Developers. “CitiSquare will be a vibrant new lifestyle destination that combines community, culture, dining, green spaces, and a location near mass-transit. Mayor Ras Baraka and Deputy Mayor Allison Ladd deserve a huge amount of credit for getting this project off the ground and we look forward to working alongside them as we create one of New Jersey’s most dynamic new neighborhoods right here in Newark.”

Accurate Builders & Developers is strategically developing CitiSquare Newark, with the goal of creating a distinct sense of place for future residents, retail tenants, and visitors, while also fostering connections to adjoining neighborhoods and bringing new economic opportunity to the city. Formerly the home of the Newark Bears, an independent minor league baseball team, the 10.75-acre development site is located at the intersection of Broad Street and Division Street, a short walk from parks, restaurants, grocery markets, and cultural attractions in downtown Newark.

CitiSquare Newark’s residential buildings will feature revolutionary new amenities, co-working space for small businesses, entrepreneurs and freelancers, and attractive architecture that will further distinguish the Newark skyline. A collection of studio, one-, two- and three-bedroom rental residences will be available.